Ok, probably a silly question as I can’t find an answer by search but……
The user manual says the lower bank of switches selects the input to be output to a recorder, but doesn’t say which connector this appears on. Neither do the diagrams
A few connectors show input and output, but not obviously the record outputs.

hope this helps from the reference manual 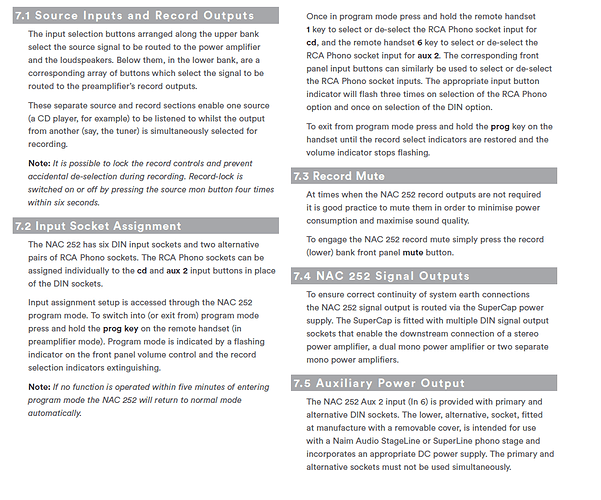 Hi
Yes, read that but it still doesn’t tell me where to connect the recorder to (which connector carries the out signal).
It can’t be on the supercap as it says this is independent of the signal going to the amplifier.

Certainly the Tape input is also an output. The manual ought to say which others if any.
These are also where you’d connect a Headline headphone amplifier - mine is connected to the Tape input/output.

Looks like I’m a bit out of date. The picture of the back panel in the manual shows which are in and out - hdd, av and aux 1.

which source are you trying to record from ??

Haven’t tried any yet, wanted to know what sort of lead I need.
So, it’s as I thought, the output is fed to all 3 of the connectors marked as having in and out.
That seems a bit odd if trying to keep cross talk down - why would you feed the (an example) CD record out via the AV in connector when the AV itself may have a signal in it.

Seems weird to me and I struggle to see how this would be a clean signal either of the CD record output or the AV listen input (for the above example).
They all share the same earth too, from lots of different sources.

The Naim designers obviously dont agree and they have incorporated this design for decades.
It also works very well. 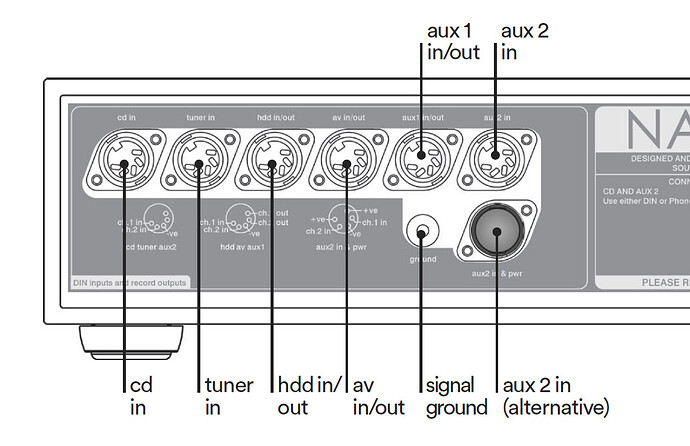 The source you wish to record from is active, you then mute the other record imputs as it mentions in the booklet

the leads would be DIN to DIN

Seems the only way it works cleanly is to dedicate one connector to tape out only (or maybe tape out/in). Makes me wonder why they put in all the clever in out switching though.

The Naim designers obviously dont agree and they have incorporated this design for decades.
It also works very well.

Quite so. It is a normal arrangment where DIN plugs are used. There is a standard alocation of the Pins to be Inputs and Outputs.

All is explained here - DIN Connector

Its also shown on the back panel of all Naim Preamps.

I’ve not tried recording yet, but I’ve acquired an old Sony minidisc and I’m interested in trying it

Understood, but normally a connector only connects between two equipments (so there is a single ground wire, no ground loop), typically a tape recorder in or out and only in or out signal is present at any one time. Here, the connector can connect to 3 units, the 252 and two external units, AV and tape for example and two active at the same time and ground loop potential to the two external units.

As I said, unusual in my experience but if it works with no cross talk, fair enough. In my case I have a spare connector to dedicate to record anyway.

I still think the manual could be clearer

It works fine. I have three recorders connected to my Naim preamp at any time and all work perfectly.

Hi Richard
I’ll accept the experience that there is no cross talk, but when you hear all the chat about cable dressing, crossing at 90degrees, keeping wires separate, keeping units separate, then two different signals are connected via the same connector (my example of using the AV as an AV in and the, tape monitor out) all seems a bit inconsistent.
I’ll keep a connector dedicated to record in/out only

Same connector but different pins are used for Play and for Record so totally separate connection. If RCA Phonos had been better here Naim would have used them.

That’s what I had in mind, dedicate a connector to the tape function

So what are you after then? A dedicated pair of phono sockets purely as a pre out?
Hardly any difference from what Naim offer really.
I think there is only principles around keeping signal cables away from mains, not really signal from signal.
Just use it, forget it and enjoy your music.

Just some clarification which connector to use for record out. I still feel one shouldn’t mix sources (eg Av and tape) on the same connector so maybe simply a clarification in the record section along the lines of
Any of the three out connectors can be used monitor out (record).

In any case, I have my clarification from the forum and can go ahead and experiment. I have an unused connector I can dedicate.

You should never mix sources on the same connector or input. You’d have to try hard to do that though - especially with DINs (ironically it’s much easier to do with RCA Phonos). I’m not sure why you think this is even a likely possibility?