I bought an album of the Hoff ensemble last weekend on HDtracks in 352/24 bit. I downloaded in AIF format.

When I play the files on my Naim ND5XS2 the Naim app displays that it’s playing in 325/16 bit. The app also states that it plays the AIF as ‘upnp WAV’. I asked HD tracks if that’s correct. They reply: it’s just your system.

Now I am wondering; is it really the Naim? Sounds strange to me. I tried to play it with a different player from a pc, but don’t get the resolution info. Is It maybe the AIF format? 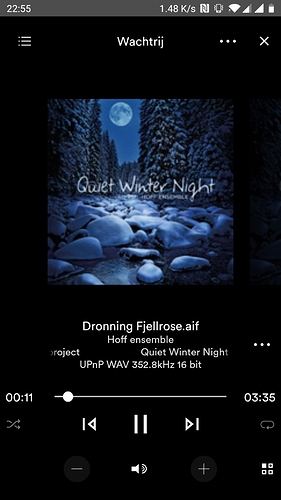 Hi, where are you storing the music file, and what server are you using? It may be the UPnP server that is set to send a 16 bit stream instead of 24 bit.

I use my Synology in my home network to store the file. I stream directly from this NAS to the streamer. I also have stored demo hi-res files there. Also in 352/24. When I stream those I see the correct resolution in the Naim app. This is why I suspect HDtracks maybe sold me a file with not the right resolution or it’s the file format that causes it. 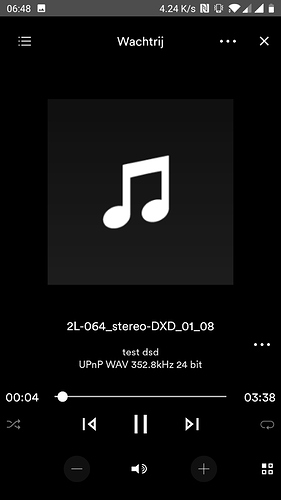 These appear to be WAV, not AIFF, unless the server us transcoding from one to the other on playback? Your second screenshot at least shows that 24 bit files will play, so my suspicion would be that perhaps the file was downloaded as 16 bit. Maybe you can look at the file and check the format, or ask HDtracks to check it for you.

Use MediaInfo to check

Good Idea. I used mediainfo and it says 352/24. So it’s not the file but somewhere in serving it from the DS213 or reading it by the ND5XS2. The media server config does not restrict it to 16 bit, so I guess it’s the streamer…

. Maybe it is only a number. At least I hear a better quality then the Flac 44.1 /16 stream from Tidal. Thanks for the advise!

The ND5XS2 supports up to 24/384 aiff, and I’m not aware that any Naim streamer can downsample a stream or transcode it to WAV, so I would suspect that your server might be the prime suspect. Are you using the Synology’s own server, or something else?
As a test, you could try a different server. Either on the NAS, or copy the album to a USB stick, and try it through the built in server in the ND5, and then see what you get.

You are right! When I played it directly from USB it plays the right resolution! So the problem is the DS213 server config. The screenshot of the file that does play the right resolution is also from this NAS but a different format. It has to be something with the config of the standard AIFF format on the Synology. I’ll know now what to do and how to test. Thanks again ChrisSU!

Many people choose to run either Minimserver or Asset on a Synology NAS rather than Synology’s own server, so you may want to consider that. Alternatively, stick your whole library on a USB drive and just keep the NAS as a backup if you prefer. Still, good to hear that you’re making progress.
Out of curiosity, does it sound any better/worse/different when played from the USB stick?

It was the media server from synology. I deinstalled it and installed Minimum media server. That works very good. Now I get the right resolution. Maybe good to know if others encounter the same problem and find this topic…