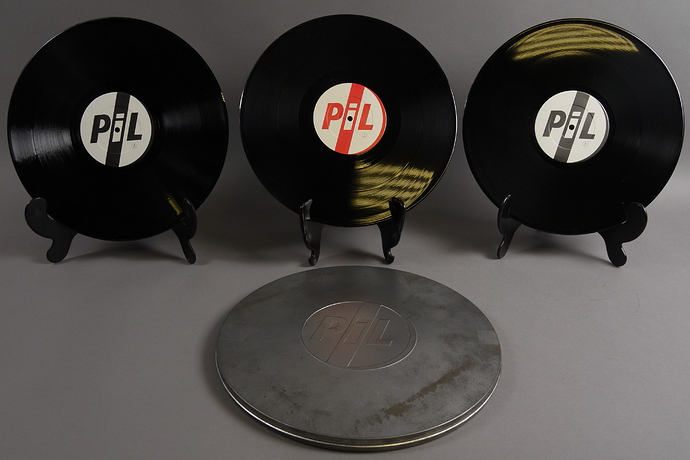 I remember back in 1979, while still a schoolboy, I bought Public image’s Metal Box - an hour’s worth of music across three 45rpm 12" discs, packaged in a tin (later pressings came out in the form of a 33 1/3 double LP). At the time the band said the format allowed for deeper bass and better sound.

I always thought it sounded good at the time, even when played on our crappy family music centre. Later on, after going down the Linn/Naim route, I realised that Lydon, Wobble and Levine were right. It sounds absolutely incredible on 45rpm - bass so deep it must have been conceived in the Mariana Trench, guitar so trebly it could remove teeth enamel and and amazing sense of space. Not what “audiophiles” would consider a good recording, but I think it sounds stunning.

I regret not having bought the Abraxas one. I bought the Donald Fagen and the sound quality is outstanding. By then, Abraxas was sold out.

no items on Discogs, second hand ?

I could probably find it if I looked hard enough - at a hugely inflated price. But I won’t bother.

I see that the Abraxas is still available on Amazon for $165.74. Certainly not cheap. Some of the copies on eBay are insanely priced.

I did buy it for $100 when it first came out. Much better than the version I picked up in the 90s.

Whouah, i can not believe. It’s crazy!

I have a fair few 45rpm albums, including the Dylan MOFI releases, fleetwood Mac releases, and the Stevie Ray Vaughan boxed set. No question for me that overall they sound better than the original realises or other heavy vinyl releases. As far as the inconvenience goes, I don’t mind changing a 33rpm record - apart from anything else it tends to make me listen to the whole side rather than hit a skip button and miss good stuff - getting up another couple of times for the 45rpm LPs to me in well worth it.

Would you have a link ?

Linn has some excellent releases. 45 seems to get closer to reality but at the cost of changing sides more often. Still good on the exercise front!

I see that the Abraxas is still available on Amazon for $165.74.

Are you sure that’s the One Step 45 rpm issue? Sounds more like the regular Mofi issue to me.

I found the only item available for 581 euros, on cd and lp site. On discogs it starts at 1200 dollars. No one on ebay. Just the Santana first album on 45 pm, but not abraxas.

Even the mobile fidelity 180 gr i have starts at 78 dollars, so around 100 with shipping. Already expensive!

I’ve yet to listen to my Marvin Gaye - What’s Going on - One Step Mofi still in shrink wrap on my shelf finding the time when we are both in the house and in the mood to hear it right through is proving difficult at the moment and also messing about with that stupid adapter to get my LP12 spinning at 45 is an unattractive prospect
I have read that lots of people prefer the 33rpm Music Matters Blue Note reissues over the 45’s but in my experience 45 usually sounds better.

In my special edition copy of “In Rainbows” by Radiohead, the vinyl is double 45rpm.

It is possibly one of my best sounding LP’s.

There are records Analogue Productions has done at 45 RPM that are jaw-dropping. The Nat King Cole Story, for example. The lot of them are very expensive and that’s annoying, but on a legitimate high-end label, I would be shocked if the quality was not something very special.

i am tempted to buy Dire straits Communiqué and Curtis Mayfield Superfly on 45 pm mobile fidelity. around 100 dollars each.
They will be much more expensive later.

I am not mad at having to flip sides so frequently with 45rpm. The music matters jazz blue note records are great but also the 33rpm ones they have done are great as well.
Some of the Mofi Dylan 45rpm are fantastic also as are some of The Doors On analogue productions.

i am tempted to buy Dire straits Communiqué

So would I if they made it.