Hi, I have a NAP500/PSU from 2000 and a NAC552/PSU from 2002. I presume both would be ripe for a factory service.
What can I expect Naim will service / change in either? If I would consider a DR upgrade on one unit, which one should I chose?

A service is usually much more than just a change of capacitors. If your NAP500 hasn’t had the resistor lift update done, then it will probably have that done too. And if you want the illumination of the logo to be brought into line with later units, it’s worth having that done at the same time when the amp is apart. If you want a full breakdown of the service then maybe @NeilS can advise on the details.

If I would consider a DR upgrade on one unit, which one should I chose?

I had both serviced and DR’d a couple of years ago. Expensive but worth it. If you DR one of them then it’s got to be the 500 - it’s awesome.

Agree with Nick on this, a 500DR is a substantially better amp than a 500.

Hello Richard
By coincidence I am starting to box my 552/500 up to be sent to Chris W for recapping and DR on both units.
With regards to the resistor lift and logo illumination - which model year NAP500’s already had this done? My 552 is at the 15 year mark and is in need of a service however my 500 is only 2011/12 vintage. I simply decided to have it recapped in advance (and DR’d).

You’re in for a real treat, Gregg.

Gregg, I don’t know the s/n at which the resistor lift began but it was pretty early on. Same with the logo illumination change, which came into play when the Classic/Reference range was introduced. Your 2011/12 unit would have the later illuminated logo and also the resistor lift.

Dave
Yes I am starting to fasten my seatbelt. When they come back it will definitely be exciting.

Richard
Thank you for the information. I have no doubt that Chris W knows exactly what needs to be done

The 500/PS & 552/PS servicing would include all tantalum & reservoir caps and, if required - trip resistor modification in 500PS, system automation compatibilty mod & s/w update in 552, all logos.
Plus anything else we deem necessary on inspection (suspension system, mains switches etc.)

Not a cheap job at Salisbury for both units to be brought up to current spec. However the new cost of both units at your friendly Naim dealer is north of £40K. So its really worth having it done.
The 500 with its Gull Wing doors, which look spectacular when they are opened, is a more complicated beast for servicing some buried components. The 500 PA goes to a 750.
Expect a major improvement from switch on and as it burns in, things will get even better often over a few weeks/month.
You will be in for a treat.

What does the software control in the 552? What components are actually updated as I did not know that the 552 has FPGA devices?

IR, pot motor drive, input mapping/switching, front panel illumination - everything for the control side of things.

IR, pot motor drive, input mapping/switching, front panel illumination - everything for the control side of things.

Is that a part of recap service or if needed service?
Has a 552 gone through a software upgrade since the inception of a 552?

Any necessary hardware & software updates would be done even if the product is just sent in for a check over.

Sorry, I should have made that clearer.

From memory, I would say that the 552 has probably had roughly three different software versions in its lifetime. Two were very early on & it’s relatively rare to see one that requires an update.

This weekend’s project - pack up my 552/500 to send to Chris W.
I’m sure his work includes “any necessary hardware or software updates” as well

The only problem I had was with the recommended and highly detailed shipping supplies list - it arrived on a pallet ! 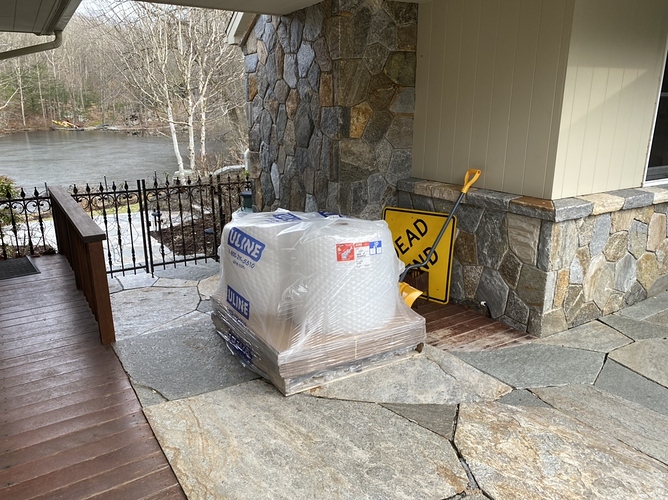 Gregg,
What’s Chris’s turn around time for a full service and DR upgrade ?
Your lake looks frozen Is Buster still enjoying the cold ?