Naim found performance advantages with using one extra large toroidal transformer over two smaller independent ones of similar overall cost. Of course you could use two of those same extra large transformers, and we listened to a NAP500 powered by a pair of 500PS units. It did some things that initially sounded rather good - there was this huge airy soundstage - however, it quickly became apparent that this was more of an artefact and that the cohesion of the music was being pulled apart and was…

I am listening and undecided, but am hearing a lot to like. Have it for a few weeks - the acid test will be moving back to just one (as it was with the 2nd PS on the 555). But right now I am having enough fun to leave it in situ… this system grooves!!!

Hi Robbo so are you using to Nap500 power supplies…by just simply plugging in one supply for each side…and nothing else. I read somwhere that there were earthing issues…

I may be wrong but I thought @RichardDane said Naim felt that two ps didn’t really work.

Initially it can sound really good - in a very "hifi-ish’ kind of way. However, after a while you then realise there’s something not quite right. See here;

Naim found performance advantages with using one extra large toroidal transformer over two smaller independent ones of similar overall cost. Of course you could use two of those same extra large transformers, and we listened to a NAP500 powered by a pair of 500PS units. It did some things that initially sounded rather good - there was this huge airy soundstage - however, it quickly became apparent that this was more of an artefact and that the cohesion of the music was being pulled apart and was…

This is where I think Naim could do some research…I am sure it could be developed I am also equally sure that you are correct its not just a question of slapping anther supply on. What would be good about this approach is that it would fit in with Naim’s modular ethos…and possibly give a closer stepping stone to the Statement. I suspect the grounding in a shared chassis is
an issue…maybe an earth link between the 2 psu’s could help…development, development, development - come on Naim. I know the 500 is a niche product, conversely there must be quite a few 500’s out there…and such an upgrade would be tempting to most 500 owners…

It would mean developing the individual power supplies for purpose as mono units. I recall Roy mentioning that he felt that there were likely “parasitic artefacts” from the unused side of each power supply.

Interesting makes sense…maybe you could keep the same basic psu design which is excellent but combine the outputs with a mini internal link bus bar arrangement…basically allowing the psu to act as one huge power supply…all future 500’s could have this as standard. Existing owners maybe could exchange there 500 psu (which could be updated in the future) and get 2 new psu’s … for say 12-14k … just a thought…

That’s what I thought…how many 500’s have been sold over the last 22 years…I am sure a good percentage of owners would be interested … not only that it would refresh this fabulous amplifier…giving excellent publicity.

Sound like a great idea. However, something tells me it may not be quite so simple…

It never is!!! this is the genius of Naims patient and fastidious development …linking it up would probably generate huge hum …although in theory the psu would be nice and balanced…come on Naim dust of the 500 and give it some develeopment…

When my brother worked at Heybrook helping design and build there amplifiers…they took the P100 and gave it twin supplies totally separating - separate transformers and separate rectification and capacitors. My brother said the same HiFi impact was great but something was missing… there was no parasitic redundancy in their implementation - strange, however if memory serves me well they kept the single board and cut the tracks to separate the power rails… I will ask him about how it was configured and tested.

So why no such problems when you add a second 555ps to the nd555 or cd555, as surely its very much the same?
The 500 is mono design and split into left and right and i would have thought the power supply is basically 2 x the same in one box

Thats what by brother thought when he separated the P100 amps to accept twin supplies…it worked but sonically something was not quite right… Obviously with the 500 you have huge redundancy as one psu supply is left unused if you use the psu unmodified. That can leave the transformer a bit imbalanced…I suppose. I think doing surgery to the psu may be possible to link it together to form one mighty power supply…should be fairly straight forward…

Not being an R&D engineer I have no idea, but I would hazard a guess it may be down to the two sections of the 555PS being for different things - analogue and digital perhaps? Or perhaps something that just affects a power amp?

Like you Richard not a clue really, i just know that the 500ps looks like it has a few windings from the transformer that feeds 12 big caps, that all look the same onto one board that also looks like its 6 x the same. That to me says that it split 3 to the left and 3 to the right.
So running 2 x power supplies and each only then using half the internals, if that gives you extra reserves as far as the transformer is concerned i dont know as like i said it looks to have a few windings on it, so i guess it wouldn’t as part now wouldn’t be doing anything? 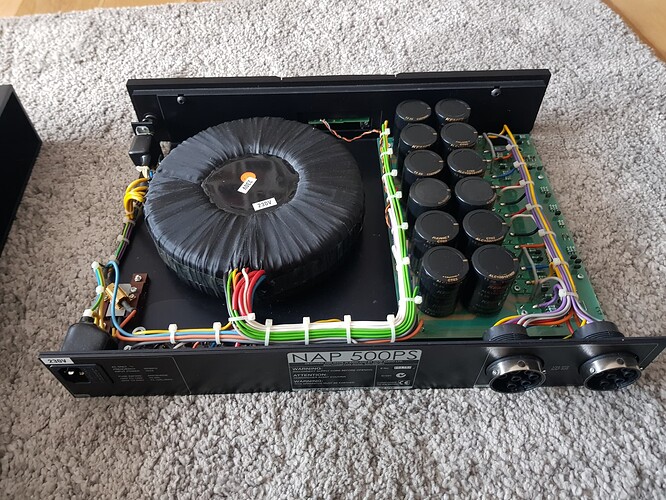 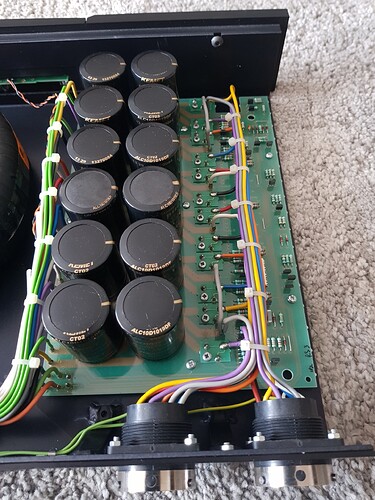 Inside the 500ps.
As you can see its like what i said i think?