Punch drunk as I am from watching cricket on terrestrial TV, I welcome rugby union’s showcase.
I like the ambition of the Italians… but not their defence.

As for England v Scotland, it’s too early to say, but I like the look of young Redpath, a real find.

Punch drunk as I am from watching cricket on terrestrial TV, I welcome rugby union’s showcase.
I like the ambition of the Italians… but not their defence.

As for England v Scotland, it’s too early to say, but I like the look of young Redpath, a real find.

Not so long ago, I’d have sat back, relaxed and watched or attended most of the relevant 6 Nations matches for me.

My mind is no longer on it. Perhaps too many other distractions in recent years. Oddly my father was quite fanatical about his rugby but somehow lost interest in his 50’s.

Mrs AC is always keen to watch them still, I went to Waitrose instead of watching England vs Scotland, partly as tomorrow is a special day and I needed to get some nice food as celebrations won’t be what she would normally have anticipated - managed to snag a couple of Côte de Boeuf which is what she fancies for dinner tomorrow.

Crazily I had 2 shops (silly money, trolley too small) and hope I didn’t exceed the 2 hour car parking limit - I’ve not been there recently as the local M&S is closer and I know their layout better, but I really took advantage of a variety of things I can’t generally get in the local M&S.

Worst 80 minutes I’ve seen from England in a long time. And best 80 from Scotland.

A shame Scotland’s attack didn’t really fire. Confirmed my opinion that Farrell doesn’t cut it as an international 10.
Redpath had a great game though. Itoje was useful.

Well played Scotland, England woeful in every aspect of the game.

Scotland have played pretty but still lost in recent seasons but totally deserved it today, better in all aspects than England. They have recently been dull while winning, today just dull. Good job no crowds to boo them off I reckon

I have been slagged off for criticising Farrell on here. Today the pack was beaten up and so indcisplined that he hardly touched it. I still prefer Ford though, and time to bed in a new young scrum half I reckon.

A magnificent Scots win from what I have seen on BBC highlights and a match report in the Sunday Times. Congratulations to them!

Great start with a win for Wales who nearly stupidly lost it by kicking away possession near the end.

Could have gone either way, great Ireland commitment with 14 men from early on, though despite Wales probably giving away more penalties I think Ireland possibly put in rather too many high tackles, you just can’t do it in this day and age.

Man of the match? CJ Stander for me, what a ball carrier, the way he floored Faletau (who was fairly static) is the kind of hit any rugby fan loves, though preferably when it’s done by your own side! Tipuric was great as was the standard Alun Wyn performance.

Relief - thought Wales had lost it again. A let off for Pivac - where are our home grown coaches?

As an aside RIP John Pullin - farmer, player and captain in true amateur spirit.

It seems like a moment to re-post this, in which John Pullin features: 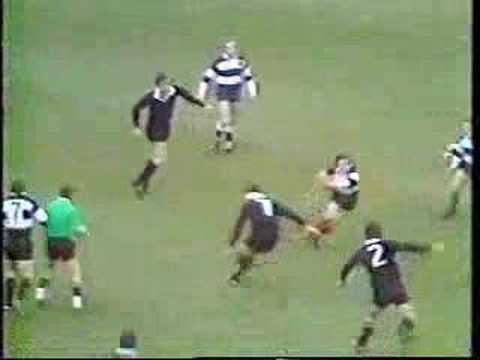 From the days when prop-forwards were smaller than today’s centres.

Two very high possible yellow/red card tackles in that clip too, both on JPR I think. Times change.

Thinking of this weekend I really hope Scotland kick on and keep winning well. I had not realised they have never actually won the tournament. Putting aside my patriotism the game could do with them continuing to prosper and they have been good to watch. I’m not sure whether to hope much for England. If they get beaten again maybe Jones will lose his job!

Can someone tell the English guys to try and pass the ball around in the next match. It would be a nice change…

In other words, for Gords sake stop kicking the life out of the ball…

I note Ollie Lawrence dropped after one game where he touched the ball (at No 13) just once. Not entirely his fault!

Said with a heavy heart but if EJ continues to select teams to focus on 10-man (kicking) rugby and reject a lot of talent like Ollie, the Simmons bros., I’m hoping that one of the teams put a big points haul on England to demonstrate what the 15-man game is all about and which the SH sides excel at, save perhaps SA who prefer power in the main. It’s glaringly obvious that England’s midfield absent Manu lacks running threat, pace vis Farrell, and creativity when tested to other teams. Simply shipping slow ball on to the wings isn’t good back play.

An England 2nd XV should beat the Italy team and this weekend I strongly suspect England won’t generate a points gap of more than 20, which EJ will point to as a good result, yet the French team ran amok.

As well as Scotland played, on previous evidence (e.g. the struggle against a relatively weak French team a few months back) England’s performance wasn’t unexpected and, once again, showed up some player weaknesses IMV.

Having lost to SA in the WC final it is as if Jones decided to be more like them ie all kicking and power up front.

Losing my interest steadily. I’d rather watch any of the other five nations at the moment

The really strange thing about the RWC was that Jones was the Japanese team coach when they beat the Boks at the previous RWC (at the Amex Stadium in Brighton IIRC) and this was done by playing fast rugby, staying away from any direct physical match-ups e.g. the ball was in and out the scrum in a flash.

Yet, with England, once the Boks’ power game was brought to bear (a celebrated feature of their team), England kept to the same game-plan and got punished in the scrums and got ‘behind the game’.

If much of the public comment on press articles is an accurate reflection, many fans are questioning what’s being seen out on the pitch and why England’s play is so limited in nature given the amount of talent in the Prem and how most teams there play…it’s not as if Jones is in the early years of his stint.

I think we’ll struggle in the 6N this year and I cannot see several players in the current team lasting until the RWC in 2023.

Re: Jones. I wouldn’t mind if the performances matched the rhetoric.

And when England lose, it’s often blamed on defensive shortcomings, avoiding the fact that the aim of the game is to score more points than the opposition - but wait, that more often than not means playing a 15-man game and, shock horror, passing the ball properly!