Somewhat off-topic when it was posted on the Solstice thread, in response to a comment from @hungryhalibut regarding a Bentley somethingorother’s cabin emissions:

296g/km of CO2 is an absolute outrage. There is no place for these things today. Why people fawn over something that should be banned

Not sure how you’d administrate that. And would I suggest work against the less well off who depend on older vehicles etc.

We price goods and services on perceived value. On the whole, environmental impact does not have a substantial influence on that value.

Globally, we must now calculate a finite carbon budget for the world in order to avoid climate catastrophe. This is not meaningful to individuals unless they can understand their own impact. The simplest way to achieve this is to divide the global budget by 8 billion (put in extremely simplistic terms), and allocate this budget to each person. There would be some trading between people so that the rich can spend more carbon, but it would be based on a finite supply. This model already exists in some form as carbon credits but has lacked a useful calculation of carbon cost, plus a failure to consider other environmental concerns beyond simply carbon output.

Society already considers how to support those who need financial support and the carbon budget could be similarly managed by countries. Some countries subsidise certain goods for example so we already have a precedent and model to redistribute some of the budget accordingly.

Calculating the carbon cost of an item or service is considered by some to be too complex or inaccurate. It is complex, but so is pricing any good or service and yet the market shows us that (with some regulation) we are capable of valuing items, we just haven’t been required to consider climate impact as part of it.

Once that was a mandatory consideration suppliers and consumers would be motivated to solve this issue. Naim, for example, could calculate the carbon cost of its products if the carbon cost of contributing parts and processes was known. It’s no different in principle from calculating a build cost, which has to consider cost prices for parts, transportation of parts, warehousing, manufacturing labour, production costs, etc. Consumers could then usefully compare products based on climate impact. It would require a calculation on the complete supply chain to be a useful comparison, but this is possible.

Everything a person pays for would have a carbon cost associated with it (just as everything has a price.) I could choose to spend my carbon budget or sell it for someone else to spend. I know deep down that buying records has a climate cost and cycling to work instead of driving helps offset this, but I don’t know how much. Consumers need an accurate way to know their individual impact, and the best way to ensure this is accurate is to base the economy on it.

I certainly would like to see carbon footprint manufacturing values on appliances, like we do on food items for fat/salt etc. Along with a running carbon footprint costs of using that appliance, which we partially get now in the letter ranging , e.g. A++ fridges.

You would probably start with all electrical items as part of a BS standard, then gradually extend that to other items over time. Might be hard to do on small things like a resistor, so perhaps anything under a certain value would be exempt.

Interesting thoughts. My local handyman has announced that he is going carbon neutral - planting trees on behalf of his clients. But I’m not sure how he is going to calculate the equivalents of building a shed or laying a path.

As I posted in cod philosophy this morning the inequality between rich and poor really confounds things like a carbon budget. For myself I believe each must do what one can. 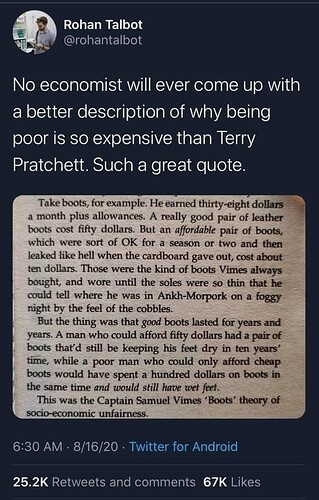 There’s some truth in what Terry Pratchett wrote when it comes to the life of an individual item, but there’s no escaping the fact that those of us who live in well off consumerist parts of the world will have a far greater consumption of energy and materials, broadly proportionate to our income.
Sure, we may have the means to do some things to offset this, like using greener energy, but running bigger houses, travelling more, and owning more stuff, we have to accept that we are the ones who are driving the worlds ever increasing carbon emissions.

Perhaps the OP is onto something here. Not easy to implement, but capping our enormous consumption needs to be part of the solution.

I have one observation on this point:

Society already considers how to support those who need financial support and the carbon budget could be similarly managed by countries.

The question, and it is a very significant one, is whether society currently strikes the right balance in supporting those less fortunate than others, and thence whether society will in respect of carbon budget. And the answer to the first part of the question can be very different between societies - and depends on who is answering. Personally I am not convinced that Britain has got the first aspect right (which is not suggesting that getting it right is easy), with the richest getting richer and the poorest getting poorer - in an enlightened society one would expect no-one to be below the breadline…

If taking it to this personal level is the right approach, my view is that the allowable carbon budget should be identical for everyone, rich or poor, in a rich society or a poor one. The concept of trading then makes a lot of sense, the rich person being able to afford low carbon products, or carbon offsetting measures, while the poorer person can gain monetarily through the trade. That is provided that the trading is consensual at an individual level. The big question here would be what price for fairness, and how to get that balance between different societies, if only to stop exploitation between societies.

I certainly would like to see carbon footprint manufacturing values on appliances, like we do on food items for fat/salt etc.

The challenge I think is that ensuring it is an accurate value is difficult unless the vendor is motivated to do so. There are only two ways to ensure accuracy:
1 regulation ie force the vendor to calculate, with all the bureaucracy and unfairness this entails
or
2 make it the thing that determines the vendor’s income.

The monetary system shows us that we are extremely good at calculating the cost of an item from all its component parts, labour, etc. This level of detail needs to be applied to carbon cost for our to be worthwhile.

Might be hard to do on small things like a resistor, so perhaps anything under a certain value would be exempt

Not if it’s the thing you sell. If you are a manufacturer of resistors, you are highly motivated to set a price on it that ensures you can make a profit.

If manufacturers were similarly motivated to set a carbon cost, they would.

I think in the past life cycle analysis has been able to identify energy and resource use in products, from which one might be able to deduce carbon footprints.

I guess to an extent we do this for goods like household whiteware, stickered for water electricity use.

Harder to estimate a lifecycle carbon cost, but perhaps that becomes part of the second hand market too. If I sell a used good, I get money for it, in principle I could receive carbon credits for it too. How we would calculate this I don’t know but if we can price something with a monetary value then we are capable of calculating a carbon cost too, if the motivation is there.

If taking it to this personal level is the right approach, my view is that the allowable carbon budget should be identical for everyone, rich or poor, in a rich society of a poor one. The concept of trading then makes a lot of sense, the rich person being able to afford low carbon products, or carbon offsetting measures, while the poorer person can gain monetarily through the trade

Yes, that’s exactly how I see it. Entire countries could trade in their carbon ‘surplus’ for the wealthy to utilise (a system already loosely in place). The key would be making carbon emissions valuable enough for this to have a material impact.

They can simply raise the prices of the goods they sell us - the wealthy. This will also help us got get the poorer part of the society back in a job.

I’ve removed a couple of posts. It’s probably impossible to discuss this topic without involving politics, so just a warning that it may not last long here.

I am stumped. In what way could this topic contravene the rules? It’s not political, for example?

When discussion turns to that about governments and what they should (or shouldn’t) do, then it turns political.

Rolls-Royce believe they have produced the world’s fastest all-electric aeroplane with their Spirit of Innovation. It reached 387.4 mph a few days ago on a flight from Boscombe Down.

Our airfield is about 6 miles away and their approach passes through our airspace so we have to co-operate. We were aware of “something different”.

Not sure about the carbon budget, but clearly big business is looking very closely at alternatives to oil.

Long distance flights could have all the passenger seats changed to exercise bikes, generating more capacity while reducing ill effects on health, with a partial ticket refund based on metered output - and with compulsory cycling for all in the event of an emergency extending flight time… 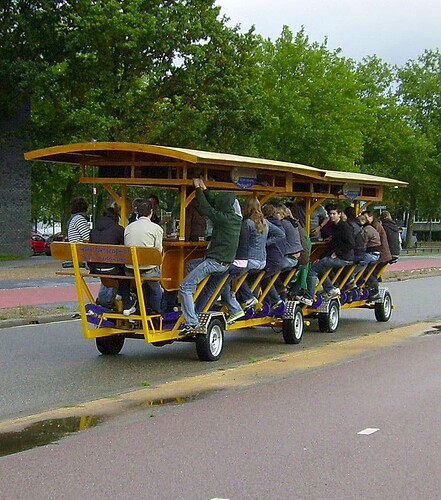 People interested in this thread might also be interested in “The Ministry for the Future” by Kim Stanley Robinson, a science fiction novel published a year ago that explores a large variety of solutions in a semi-post-climate-apocalyptic near-future. It’s a sweeping story in both scale and scope, with a goodly number of scenarios for mitigation and remediation explored.

As the title implies, political motivation and actions are a central theme, including re-basing the entire planetary economy on carbon as the new currency.

I quite enjoyed it, very thought provoking (including some cool geophysics-with-icebergs projects)… but fair warning that it’s a bit long and detailed, in parts more manifesto than story. The audio book is one of the “performance” style reads, with many different people reading their individual character’s part (but it isn’t a radio play); I found that helpful and enjoyable, especially given the huge cast of characters. I hope anyone who tries this book enjoys it. 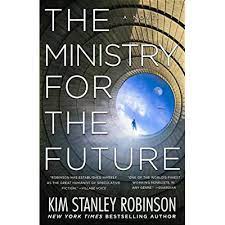 Terry’s theory breaks down when the rich man discards (or simply stops wearing) the first pair of boots after a year because they’re no-longer fashionable.

I’m not a great fan of emissions / carbon trading or offsetting because I would like to see pollution treated at source rather than traded as the damage is done first locally before been transported further away. Then again economists like to put monetary values on things, whereas the damage done by pollution varies according to locale and the state of the environment where the pollution originates.

I was chatting to my handyman today about his plan to offset his local damage by planting trees. Some such accredited organisation will plant and manage ‘his’ trees for just £2 a tree. But these trees are in Indonesia where land and labour are cheep. Even without my labour costs I could not be competitive, but at least he could see the trees!