A couple of Muso2 questions

I already asked some of the following questions to Naim Support. No answer yet. It looks like there is some backlog going on as per automated reply, possibly due to upcoming holidays. Quite understandable. Maybe kind forum members can help out.

Hidef iRadio playback indicates “Ogg Vorbis” (44.1, 48 or 96 khz depending on the station). Is this normal? Should it not read FLAC? Also, actual bitrates are well below than those stated in the app. Those so-called hidef stations do not sound much better than Naim’s own AAC 320’s. Only R Paradise, JB Radio2, a Czech classical channel and one from Switzerland are the exceptions. Well, only around 2/3 of hidef stations play anyway.

Another thing is about the operation. When I pause and turn Muso off while playing iRadio via remote, even a day after, I would normally turn it on again with remote and press play and it would resume playback. Most recently, there were some cases that I had to use the app. Also, spotify playlists do not always resume via remote when waking up the speaker after a long time. Kind of hit or miss. Do I do something wrong?

Muso is hard-wired via a switch. Download speed over 300Mb. FW, Naim App as well as iOS are the latest versions.

Hi, lossless iRadio uses the slightly unusual combination of FLAC in an Ogg wrapper, so what your Muso is showing is not entirely wrong, and you will be getting FLAC. Update the firmware and you should find that FLAC is displayed instead of Ogg.

If stations are not working it’s possible that there are regional restrictions, so this could be down to your location? If you post some examples here Naim may be able to investigate. There is sometimes an issue with the provider which can be resolved if they are made aware.

Thanks. OK, let’s see then what happens after a very long wait for ‘lossless’ broadcast in general and its implementation following my 1st gen Muso and UQ2. Btw, some 320k stations are still good for consolation. I hope those restrictions are not geographically limited.

Regarding iRadio stations not playing: You wrote that your Mu-so is up to date, but this was 2 days ago. Yesterday there was another update to 4.3 that fixed issues with some iRadio stations, so make sure to run this update too. See here for details:

For users of Mu-so 2nd Generation, Mu-so Qb 2nd Generation, Mu-so Wood Edition and Mu-so for Bentley Special Edition We are delighted to introduce yet more listening options for our award-winning Mu-so 2nd Generation family of wireless speakers, with a free Firmware 4.3 software update enabling TIDAL Connect. TIDAL Connect allows you to explore all the rich features of the TIDAL App, and stream your choices in superb quality direct to your Naim speaker. You can continue to enjoy core TIDAL str…

I did already. Thanks. Still some hidef stations in the app are not working. Pop music stations from France and one from Germany which claims 2500 kbps. No problem as the ones I like working. With update, all presets gone, hidef stations now mostly read FLAC against OGG Vorbis before but no actual fluctuating bitrate, app seems not as fast, and sometimes showing looking for rooms before connecting to Muso (never happened before)

As of the v4.3 release reporting of Ogg/flac streams are consistent with our uniti range. So it reports what’s inside the ogg container (FLAC), not the container itself.

Regarding stations that don’t play, not all stations are worldwide (licensing restrictions of the station), but do let us know if there is a station that you think should play but doesn’t. Again the v4.3 release irons out various issues in more niche ogg/flac streaming formats.

On Mother Earth Radio the system was flagging it had an issue. They have changed server, so I’ve updated the database and it works again. I see this station has 2 new channels - we’ll get them into the system.

Here is a pic of a Muso gen2 playing this station over my home wifi: 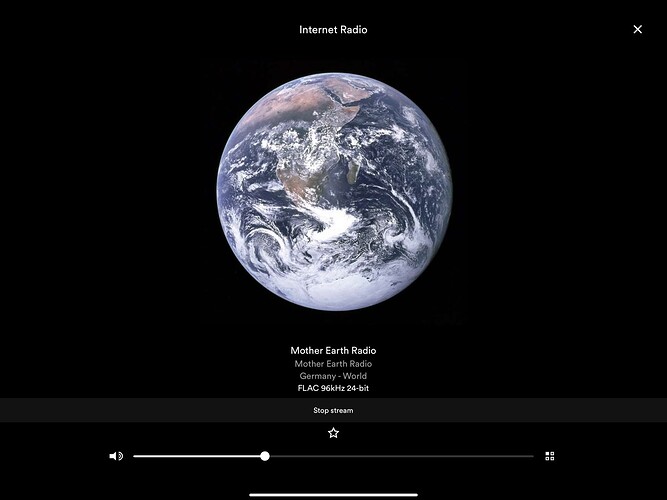 but no actual fluctuating bitrate, app seems not as fast, and sometimes showing looking for rooms before connecting to Muso (never happened before)

Why should the FLAC bitrate fluctuate, it doesn’t; FLAC isn’t a lossy VBR file
The FW update most likely has no influence at all on the app performance
The “looking for rooms” occurs for me as well when I start the app from scratch, it takes 2 secs for me. It always has done that

Ah, FLAC (and ALAC) bitrates (As in: bits/s) do vary, depending on content. It’s lossless compression, which can be more or less effective depending on content. Just like ZIP files. So it is kind of VBR.
While running manually configured Radio Paradise, the Bitrate changed every time I connected to it. As does iTunes should varying bitrates for my ALAC rips.
The new inbuilt-streams and current firmware show the resolution/sample rate after decompression, which is of course constant.

So it depends, which Bitrate we talk about.

Though given we listen to music, the variation is limited, of course. (Real random white noise would be bad to compress…)

Ah, FLAC (and ALAC) bitrates (As in: bits/s) do vary, depending on content.

Yes vary, but in my understanding not fluctuate within a file like VBR mp3 does from second to second depending on what is going on.

Anyways, it seems a very minor thing to be concerned about

Hmhh, looking at compression, I would be very surprised if it does not fluctuate (fixed uncompressed data rate, varying content with different compression ratio). But I agree, it’s a minor detail.

With mp3, fixed rate compression (CBR) uses the same bitrate regardless of musical complexity, so it wastes some file size on less complex parts (like silence). Variable bit rate (VBR) mp3 adapts the rate to the complexity.

However, mp3 is different from flac because it’s lossy and its bitrate influences the SQ. With flac being lossless, the bitrate does not have this influence.

Of course the momentary compression rate of FLAC depends on content, too [edit: and is inherently VBR] (10 minutes of silence can be compressed better than 10 minutes of symphony), but this is not the same thing as VBR for mp3, and so I wouldn’t expect this fluctuation to be shown in a streaming app because it makes no practical sense.

I can subscribe to that. (I think iTunes shows the average, i.e. file size decided by length of track or so.)

I do not want to create any confusion. This is what I am getting now. Mostly, it now reads FLAC 48khz 16-bit in hidef stations (there is a Chilean broadcast that is 96khz 16-bit). Before it was, in general, OGG Vorbis 44 or 48khz and over 1k or under and changing. Like my UQ2 did years ago when playing Tidal. And I think it is only normal due to internet speed or whatnot. I was only trying to tell how it was before 4.3 fw update. @Stevesky Yes, Mother Earth Radio now works and it reads FLAC 98khz 24-bit. Thanks.

And Airplay integration sounds nicer after the update, as I mentioned in other thread.