A jaw dropping moment with my Fraim

I can’t believe it… a jaw dropping moment has happened with my Fraim.

I have had a two stack Fraim since 2005 and after all that time I decided to borrow two standard Fraim shelves from my dealer, The Sound Org (SORG) - York, to try some extra space around my NAC and Superline.

So I now have a spare shelf between my NAP and NAC and also one below my Superline.

From the first few notes of Chris Hillman’s Bidin’ My Time LP my draw dropped and I could not believe the musical improvement!

Why I had not tried this before over the last 13 years I do not know!

The only drawback is that my Fraim stacks look pretty ugly with cables and interconnects more visible, as you can see in the before and after shots below. Admittedly the shelves on loan are of a different colour to my black on black ones which does not help the cosmetics but does not impact the music.

What is even more impressive is that whilst my wife commented on, like me, not liking the looks she did remark on the musical improvement.

So I shall sit back for the next few days and enjoy the music before I return the shelves. Then when they are gone I will see if I miss them and then I will know. Although I suspect that I have created an issue for myself. 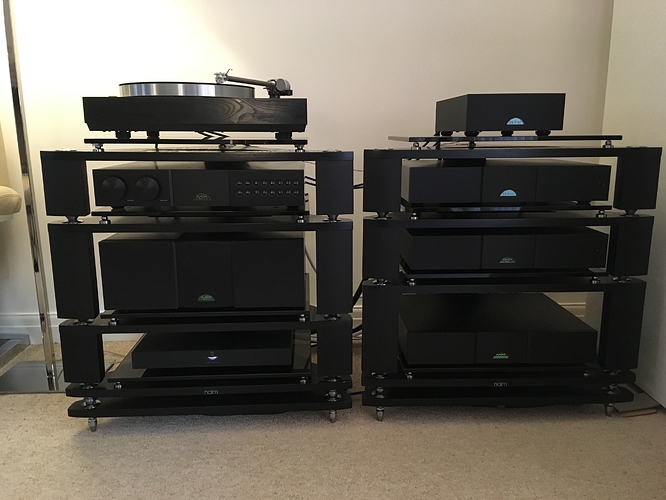 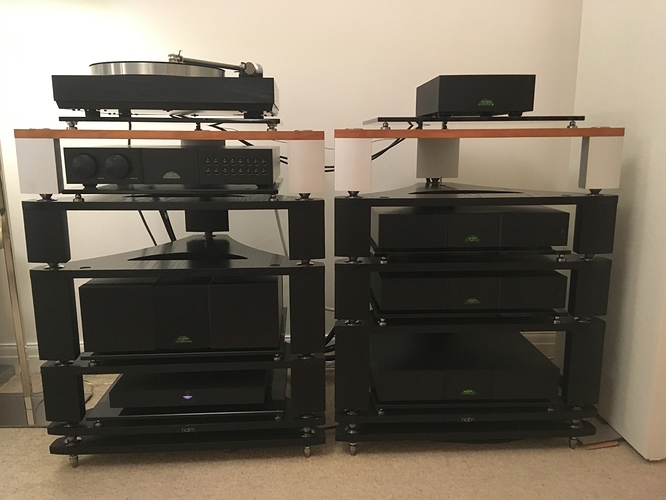 Thanks to David and The SORG for the loan.

p.s. Now playing the Are You Experienced LP by The Jimi Hendrix Experience and loving it… seems to have even more power and groove from this magnificent trio.

An excellent report Richard, thank you.

There really is a benefit in bringing in empty Fraim layers into your system. Ihavea spare level under my Nac 552 and it makes a real difference.

Rchard - i’m assuming that the Superline is the component that benefits the most from the separation from the power supplies as it’s on the brawn stack. If you were to keep your existing shelf arrangement could you put the 500 head on the bottom shelf, with the Superline on the next shelf up and put the Radikal supply onto the brawn stack ?

Yes, I found the gap under the Superline the most significant.

As regards other box positions on my Fraims I have the 500 head unit on the second shelf up as it sounded better than on the bottom shelf. Also being higher up I could keep the two Burndies off the floor. I also found that the Superline liked to be on the top shelf hence why I put it on top of the brawn stack as the LP12 lives on top of the brain stack

As regards the LP12 I would love a wall shelf but I have had a loan of the Tiger Paw shelf and looked at others such as those from HiFi Racks (very cool looking and I have heard them working well) but they both don’t work in a cosmetic sense as my Fraims are a good 1 foot from the wall and hence there is a large underhang under the wall shelf which looks really naff especially as you can see along the side of my stacks.

I could try tall legs on the shelf for my 500 which would give a gap below my 552. Then the existing medium legs transferred to under my Superline which would give it a gap. Whether this is good as having two shelves as a gap I do not know but it would be a load cheaper as I would only need a set of long legs at c£300+ as opposed to, say, two Fraim Lites at c£700+ for a pair (as I assume two full Fraim shelves at c£1,000+ a pair is a waste of money as I do not need any glass etc on these and will not be used for anything except air).

David could sell sand to Arabs and ice to Eskimos! I’ve never found issue with his advice - ever! A really genuine guy with a gift for optimising set-ups.

Have you tried empty glass shelves on your empty levels?

I find they really make a big improvement to sound quality by loading the Fraim at the three points it expects. I’ve tried with and without and it always sounds better in my rig with the glass in-situ.

Empty shelves are counter-intuitive until you experiment and find what they do, then people will not believe you until they also to the experiment. I find greatest benefits are below source-boxes, Pre, Snaxo (in my case) and then getting 500PS away from other boxes, so above the 500PS to space it away from the rest if it is bottom shelf.

With my three 500PS I eventually after home-demo purchased extra fraim height and empty shelves to space the individual 500PS as they strongly interact I found and you get greater clarity and bass timing with them not near other boxes.

I also find that empty shelves work best when there is only one in the stack and it has the glass on it.

My current loan spare shelves are without glass so I am interested in your comment that an empty shelf sounds better with glass. Perhaps I will ask David to loan the Fraim glass as well.

Although a standard Fraim with glass costs £569 compared to a Fraim Lite without glass at £369. So if I were to go this way it would be an extra £400 cost for two spare shelves.

I can’t help thinking that it would only cost me £396 (I think) for a set of Fraim long legs which I could use in my existing configuration for the 500 and then move the existing Medium legs to below by Superline hence achieving my desired gaps between the 500/552 and below my Superline. Must see if I can borrow a long leg shelf to hear any difference compared to extra shelves.

At present my 500PS is in a Mid size shelf so has extra space above it and I only have one spare shelf on each rack.

By the way, the system is sounding even better than normal and even my wife is encouraging me to buy although the cosmetics remain a downer!

Cosmetics remains an important factor to both of us.

Hi Richard - I ended up going for mid size Fraim to give some extra air probably for similar reasons. For me it was the best compromise.

Although the wires are more obvious if you focus on them.

I am another one that believes in having the glass shelves on the empty Fraim levels. Much testing was done when the Fraim first became available and I recall the tests and discussions many years ago and the glass has stayed in my spare Fraim levels ever since,

I’m about to invest in two Fraim stacks, so this is really intriguing. Wondering if I should invest in tall legs from the start

…and you have an advantage with a Linn Urika phono stage as there are no extra boxes/shelves required where as for me I have two extra boxes with their cables and interconnects as well as at least two shelves with a Naim Superline and Supercap.

p.s. now listening to Dylan’s Simple Twist Of Fate from the excellent More Blood, More Tracks LP and I still can’t believe how good these spare shelves are!

I’m about to invest in two Fraim stacks, so this is really intriguing. Wondering if I should invest in tall legs from the start

Either tall or as I prefer medium shelves work well and will save money in long-term - I had to spend more to swap-out standard levels for mediums.

Tall levels are good if you want only one in a stack as multiple tall levels - especially if you have a very heavy box or multiple above - and even more so if one of these has a suspended sub-chassis can ‘twist’ with a torque mode that couples with a mode in the sub-chassis if you are unlucky - I was as I found this out.

Medium levels minimize on stack height while giving space and can be useful to consider. Tall levels can be good in small stacks or near the top of a stack - I use a tall level for my Snaxo atop my stack of three NAP500 on medium levels - and the lowest level is a standard to keep the base level empty for my ‘empty shelf’. I tried 500 head unit on the bottom shelf to reduce height of stack and it did not sound as good - tried a medium shelf for my Snaxo - the tall shelf had better bass so it stayed.

Mine is a big cumbersome arrangement due to 3-Amp Active, but with a more sensible Passive set-up you should be able to cunningly design an arrangement that keeps space around boxes and allows for cable-dressing - is my advice.

I tried without glass and it sounded more ‘open’ but in a ‘woody’ coloured way with poorer bass quality.
With the glass shelf the colouration was gone and the bass was nice and firm again.

Note that empty shelves can ‘ring’ the wrong way and introduce a harsh sizzle (audible in Active systems) and this is cured by properly seating the glass by placing a very heavy object on the shelf for a few seconds and then removing it - another thing I found out. Naim obviously expect something on the shelf and initially the ball-bearing holding metal cup can be not in full contact with the fraim wood it sits on and then resonates with the glass - once seated firmly it does not and works great.

I have been thinking about the pros and cons of having a glass shelf or not on an empty shelf.

Makes the full Fraim shelf a bargain compared to a Fraim Lite then upgrading.

When I ordered my Fraim we ordered 2 shelves at medium height to allow more space around the Pre, Superline and CDS3.

the glass from naim is special ? a simple glass in 3mn from any shop would be different ? it should be less expensive…

The glass in the Fraim is a lot thicker than 3 mm. I am on the road, so I cannot measure it right now. Others have posted in other forums the correct thickness and the specification.
Bailyhill