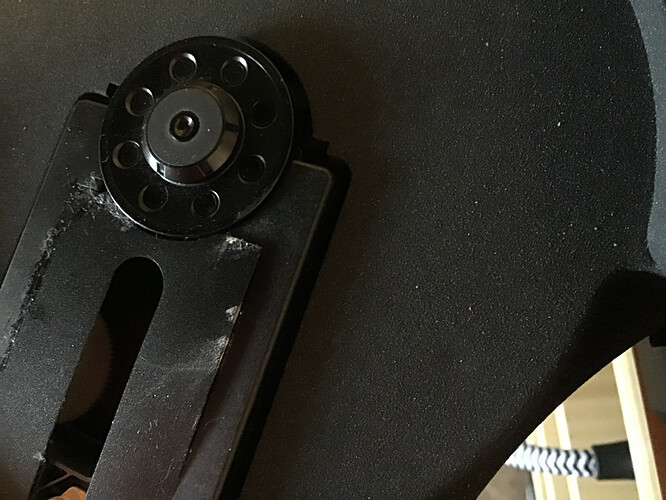 image3264×2448 1.73 MB
Not much to be done but perhaps of interest.
The CD5 x is poorly. Not every thing goes on for ever but does gradually deteriorate over time. I am living proof of that dictum.
Ignoring the imbedded dog’s hair we can see two problems.
Seeping glue on the left hand side and on ‘tother by the white splotches (God knows what they are - perhaps strimmings from my cds). the tray is starting to deform and lift. The whole tray was lightly cleaned with a cotton bud and iso propyl (under instruction)about 14 days ago. The lift and deformity it seems
is the fault that has rendered the early part of three cds unplayable. One was cd 1 of a recently purchased and very expensive Mosaic Box Set.

Not sure they came from the factory covered in glue?
Perhaps it’s something you have added late?

Is it as sticky a situation as when Sticky the stick insect got stuck on a sticky bun? Asking for a military friend.

It appears the shroud that gets stuck over the mech has lifted. There’s very little clearance so the white powder is probably polycarbonate from where discs have rubbed.

For restoring CDs that have been scratched try using Polywatch - it works well with plastic watch crystals, and can also work with CDs.

Certainly worth a try for £5.00. And ordered.
I will try it out on one of my Russ Conway cds first.
Thanks.
N

CD player now back in the rack.
Andy has fitted the new cover and all is well.
Sadly the 3 cds that were damaged cannot be repaired.
The polywatch cream doesn’t help but thanks for the suggestion.
I will have to use the remote to jump over the scrapes.
N

Can the CDs be ripped at all? You could try ripping and then burn to a CD-R

I no longer have the means to manufacture cd re writes.
Only iPads.
I accept that I have lost part of the cds to swarf.
Just a buggar that one was part of a Mosaic box set and not cheaply replaced.
Worse things happen at sea.
Thanks again.
N

As the damage is to the polycarbonate side, then it is possible to repair the disc. You need some very fine abrasive paper (sand wet works well). Then polish with the Poly watch. There area number of resources and videos online that show you how.

Instructions will be passed to daughter. My rheumatic fingers would not manage such a task. There resides the diy abilities that passed me bye.
She is a ‘part time stock replenishment colleague’

at b&q so I will ask her to get some. Highest grit ?
N

Repairing the ‘poly’ side of a CD can be done, quite effectively using a number of household products which you may already own.

I already have 1200 & 2000 grit Abrasive Paper, for polishing guitar finishes. I also have Chrome Polish - for err chrome, and metal - and again guitar finishing. Also, car scratch remover, for… cars. And car polish… for cars - and guitars.

Any/all of these can be deployed at no cost, to a damaged CD. Buying used CD’s off Discogs, I can often get a rather scruffy disc or two. Soon fixed…

Sorry to hear about the Mosaic set. Maybe worth giving Scott a call at Mosaic HQ to see if they have a spare disk? - or email them. They are usually very helpful for things like that.