Adding an xps2 to ndx2 or ndac?

In the original picture you posted (before editing it) the NDX2 wiring loom between Burndy socket and the various internal sections doesn’t look up to the usual Naim standard of neatness.

No, that looks like someone has been moving the wires around. Leaving the factory it should look like this; 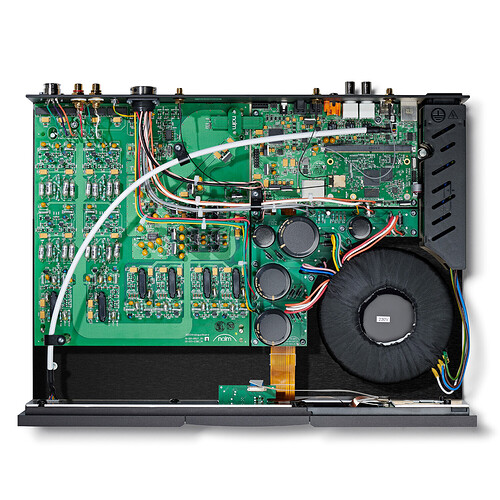 As one can see, the XPS DR is hugely better than the NDX 2’s internal supply and every single stage of the player is benefiting from one of the external PSU’s six superior DR’ed supplies.

The same applies to a plain Jane XPS2, just not ‘DR’…

Yes i thought that looked a bit scruffy. Certainly not up Naim’s usual standards. It’s just a random picture i pulled from the net to explain my reasoning as to why i upgraded with XPS DR. Thanks for pointing that out. I’ve never looked inside my unit so i would hope that it’s to the same standard as in the picture of Richard’s post.

P.S. I’ve edited my post above. Sorry for any confusion.

The main thing that strikes me from the pictures above is how substantial the power supply on the NDX2 actually is. A big transformer and five black things. The XPSDR has a slightly bigger transformer, six black things, some DR boards and lots of space. I don’t concur with the oft expressed opinion that the XPSDR is a must-have upgrade for the NDX2. When I got my NDX2 I used it with a 555PSDR. I later removed the latter and can’t really say that I’ve missed it. The power supplies to me don’t make anything like as much of a difference to the NDX2 as they do to the 272, where they really are transformational. The NDX2 is a superb machine all by itself and anyone buying one shouldn’t feel that the XPS or 555 is a mush-have addition. But then, for £5,500 you’d really rather hope that the player would be pretty good.

The XPSDR has a slightly bigger transformer,

It’s substantially bigger, i’d say twice the size, in all it’s form. If you laid down the DR boards horizontally then it would take up as much space as the player itself…and it’s a massive upgrade in performance terms, let alone it’s extra bulk and weight, and the inconvenience with the extra box. I can hear perfectly well, that while it’s still in production, that the XPS DR is a natural upgrade for the NDX 2. NDX 2 on it’s own isn’t that much more than a ND5 XS 2 IMHO, and i’ve had both.

I also found that adding the power supply to the NDX2 improved the sound materially (with all caveats about ‘in my room’ and ‘to my ears’). There are many CDs that sounded clearly better to me on my CDS2 than the Qobuz Hi Res stream ever sounded, but that number went down a lot after the XPS2 turned up.

As with all these things, if you don’t hear/ notice a difference from the extra box, just revel in all the money you just saved!

So you are paying an extra £3k for a screen, remote and to allow the option to improve the streamer by paying yet another £4.3k ( for the PS) ?

Perhaps, an Ndac is the more cost effective upgrade path than the Ndx2 then for the Nd5xs2 ? And of course you can add a xpsdr as well.

I’m also demoing a Chord Hugo TT2 tomorrow for an alternative path to look at upgrading my Nd5xs2 sometime in the future.

I love my Naim set up, but there are definitely other valid options out there, rather than being stuck solely on the Naim upgrade path only.

Certainly considering other brands as I really don’t want to get into multiple boxes and all that entails.

So you are paying an extra £3k for a screen, remote and to allow the option to improve the streamer by paying yet another £4.3k ( for the PS) ?

No. I’m saying that the NDX 2 is a finer player than a ND5 XS 2 for sure, but nowhere near the improvement gained as when you add the external PS to the NDX 2. In that scenario it well and truly leaves the baby player for dust, as one might expect considering the extra expense & layout. I haven’t compared with n-DAC so i’m unable to comment on that side of things.

I am with @Stephen_Tate on this one.

IRC, several users regard ND5XS2 as improved so significantly by the n-DAC that it gets close to the NDX2.

As I understand it, there is little consensus on whether adding the n-DAC to the NDX2 is worthwhile at all - some seem to rate ND5XS2 plus n-DAC
plus XPSDR (for the n-DAC) as better than NDX2, but few suggest it’s a massive difference.

The NDX2 itself is materially improved by the (frankly expensive) XPSDR, something that you cannot do to the ND5 XS2 - though I don’t know why Naim decided to preclude that.

I am open to comment & correction, but I think that the table of improving Naim streamers goes: -

Some of those gaps are bigger than others. Options 3 & 4 are close enough that others may swap the order, and the gap between either and option 5 is probably the biggest gap on the list.

Comparing the costs of those options does not suggest that Naim has got it badly wrong to me.

Does that look wrong to anyone?

Have not read the complete Thread, but from my experience XPS on DAC ist much better than XPS on source (in my setup HDX)

This taken from a HiFi+ magazine review pretty much sums things up nicely:

“I also contrasted the NDX 2 with and without the XPS DR power supply, it sounds very good indeed without the supply but the extra control that the XPS DR brings does give everything more power, weight, and authority. Dynamics benefit from this and bass lines have a solidity that brings substance to the whole picture. It’s not essential and I enjoyed the streamer with its onboard supply for some time before adding the XPS DR: however, going back proved to be a less enjoyable experience. I’m told that the 555 PS represents a considerably bigger jump but it costs £2,600 more so you’d want a decent result even in the high-end world of diminishing returns”.

What is the perfect feeding for the dac?

From a sound quality point of view it’s hard to beat WAV tracks on a USB stick plugged in the back. Not very convenient though, and not really practical beyond a single album or short compilation of tracks.

I don’t know if it’s appropriate to link to hifi reviews, but measurements of jitter output were much lower on the ND5X2 than the NDX2 by Hifi News. I found that interesting when considering transports.

The measurements for the analogue portion of the NDX2 look better though.

Of course I’ve got a ND5XS and nDAC for the time being, but its nice to dream of upgrades.

I wish you could link, because in the Hifi News reviews that I can find, only the NDX2 review has a jitter diagram, and the only occurrence of the word jitter that I can find in the text is:

All digital inputs are processed via the same upsampling/jitter-suppressing 40-bit code and pass through the same PCM1792A DAC, a regime that’s so effective there’s no significant difference in performance whether data is delivered via S/PDIF, USB-A or (wired) network connections.

While the ND5 XS 2’s PCM1791A DAC-based analogue output is simpler in execution than Naim’s PCM1792A-based NDX 2 [HFN Sep '18], its digital inputs are processed via the same upsampling/jitter-suppressing 40-bit code. It’s so effective there’s no significant difference in performance whether data is delivered via S/PDIF, USB-A or (wired) network connections

Forum rules allow a quote and/or linked diagram. That would be great, thanks in advance

I am open to comment & correction, but I think that the table of improving Naim streamers goes: -

You have omitted NDX2 plus nDAC along with PS options in this list. I admit there’s redundancy using NDX2 as a transport and option 2 is a more sensible option.

In my case, since owning my NDX2 I’ve tried 5 & 6 above, but I’m not a fan of the inbuilt DAC. I much prefer using NDX2 as a transport with an external DAC. After experimenting with other DACs I’ve reacquired an nDAC and it sounds sublime in my system with NDX2 as transport.

I’m using both NDX2 & nDAC bare, with no PS upgrades, instead with Powerlines into a MusicWorks G3 board.

If using only as a transport, is the NDX2 any better than a ND5XS2? I have not tried it but someone here will have done.

I also didn’t even start with ND555 or mixing Naim and non-Naim.

On other threads previously it has been suggested that there is no discernible difference between ND5XS2 and NDX2 when used purely as a digital transport into a high quality external DAC.

Options 4 and 5 on that list above would also be very close? When we were discussing nDAC route (which we have gone down) with our dealer it was suggested that NDX2/XPSDR and transport/nDAC/XPSDR are in fact very very close and which is chosen would depend on personal preference and supporting system (i.e. one might sound better with 282, one with 252). NDX2 DAC perhaps a little “airier” and a tad more clinical, but nDAC stronger on the lower notes and perhaps more “musical” to some ears.

Ultimately we just liked the idea of separating the transport from the DAC hence choice of nDAC. Plus we already had an XPSDR on 272 so ND5XS2/nDAC a whole lot cheaper than NDX2.