Hello everyone. I am about to make a turntable upgrade.

Seven years ago I bought a Rega Planar 1 turntable as an experiment - at that point I was mainly listening to CDs. I was advised at the time that if I thought I would listen to records given the system I had then I should spend more. But I thought it would be used rarely…

Now I either stream music of play records and only occassionaly use the Meridian CD player (which still sounds AMAZING).

I have decided to go for a Planar 8 (Ania Pro), but need some advice on the sounds stage. I know the Rega Aria is the best option, but that hat plus the Planar 8 is over budget. Is the Rega Fono MC MK4 a viable option? I have read some review of the 8 with the Fono and it still sounds great they say. I could always updgrade later.

I had thought about a Planar 6 with the Aria, but I think the 8 is a better long term purchase.

Grateful for any thoughts!

Get the best you can afford. I’d go for the Planar 8 with Ania Pro.

I would say at the level you are describing I would stay away from Rega Fono for MC.

I had a Rega Fono with my Clearaudio and it got moved out fairly quickly.

If your question is about phono stages (and I think you are looking for a lot of advice) my suggestion would be Graham Slee .

The Fono is great with a Rega 1, 2 or 3 but beyond that it will be outclassed

Always good advice! On the phono stage I guess I thought I could get the rega fono mc mk4 and at some stage sell and upgrade to the aria. It’s £800 more so quite a bit extra. Could stretch to it but feels a lot. 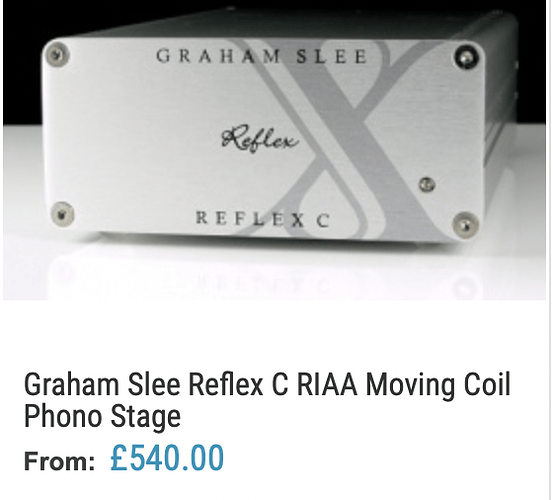 In addition, they don’t mess about , this a MM or MC it ain’t both, meaning you are buying /paying for one and not for machinery that you aren’t going to need.

If you can’t stretch to an aria (which is excellent by the way) then maybe look at. A Dynavector P75 and an XX2 cart rather than the Ania pro. I assume there is a decent discount for the cart though buying both together.

I went from a P6/Ania to A P6/Apheta and it is massive upgrade so I’d say do that and then just get the best phono you can afford until you can save for what you want. Both sounded pretty good with a stage line if that is an option for you… phono mc is ok and would be a decent match for the Ania (the pro designation is related to the stylus shape) but will be outclassed by the P8…

I owned a Reflex for a while and was very good indeed, fast and agile in the bass, very dynamic and musical, high VFM.

I have a Reflex , it’s not flash or showy, but it gets the best out of my Clearaudio

Had a Reflex M , regret selling it.
May get another. Brilliant phono stages.

I upgraded mine to an Accession, and while it brought more refinement, the overall improvement wasn’t that much, the Reflex held it’s own quite well.

I did have a P6 with dv 10x5 unyil recently when my daughter " borrowed " it. That is very engaging. L

Another vote here for the Graham Slee Reflex. I also sold my Reflex M and will end up buying another one. Ian’s suggestion of the one for MC carts is great.
You’ll want the PSU1 upgrade at some point, but you can save for that.

I have a Reflex C, it is very, very good.

As others have said an Aria would be better, but if funds are limited then the Fono MC is actually a fine compromise solution until moving to an Aria (or another similarly priced phono stage). For what the Fono MC costs it’s rather capable and while not realising the full potential of a P8 w/Ania Pro it certainly won’t let it down either.

The Trichord Dino is about as good as you will get at it’s price point and when funds allow you can upgrade the power supply or if your happy to buy used then for half the cost of the Aria you could buy a Dino/NCPSU.

That’s a good recommendation, too. Having previously owned the Trichord Dino (with the separate power supply) I would agree it’s excellent value for money.