Airplay from iPad to NDX2 and the TV simultaneously

I wasn’t 100% sure to post here or the Home Theatre section?

I am trying to achieve a scenario where I can watch a film/concert on my Samsung TV via the various on board apps (Youtube etc…), with the sound going through my NDX2/Titan 606 speakers.
Yes, I can connect an optical cable from my TV to the NDX2, but the optical out on the TV is already being used.
Don’t ask me how I managed to do it, I really can’t remember, but a couple of weeks ago I managed to Airplay the TV and NDX2 from the iPad at the same time. The sound was great! If I try that now it won’t connect the Samsung TV and the NDX2 at the same time. The music comes through the NDX2 just fine, but the TV just has a still image displayed? Please see screen shots.

I have done all the usual things, power off iPad, tv etc…and also re downloaded the Naim app with Airplay enabled in settings.

Playing the concert on the TV, with sound from the TV to the NDX2 via Bluetooth does work, but the volume control on the 282 has to be cranked right up.

I would really appreciate some help to best achieve the above scenario. Thanks 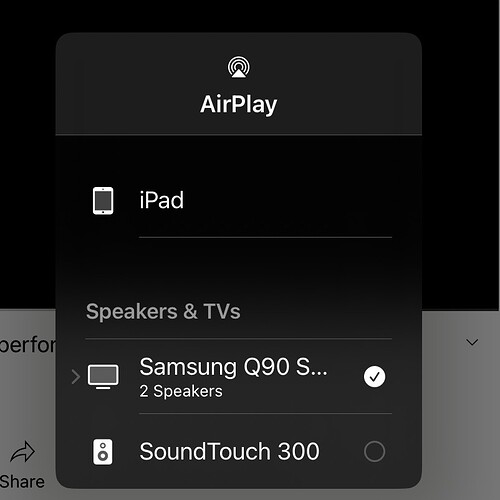 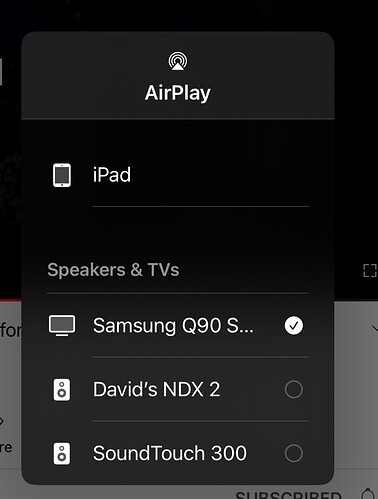 I’ve never tried it, did you do screen mirroring to the tv and airplay to the ndx2 simultaneously?

Or were you possibly using Bluetooth to connect the sound to NDX, then airplay for video

From an iPad or other Apple device you can use AirPlay to connect to multiple devices at the same time that support AirPlay 2. In the list of AirPlay devices 9as shown in your image) just put a tick by all the devices you want to play together. However, your Samsung TV won’t support AirPlay to another device, only receiving AirPlay from a device. I seem to think your Apple TV will allow to connect to an AirPlay device, such as your NDX2, so this should solve the problem.

To be absolutely honest @GadgetMan, that is possible. Over this past two weeks I have had HDMI issues between my Soundbar and TV. I’ve been plugging in and unplugging various cables right, left and centre.

Hi @XMB…That is exactly what tried to do, but ticking more than one device sends it a bit weird.
These screenshots show what happens when I tick more than one device. There are two ticked for about 5 seconds, then it goes to ‘David’s NDX2 + 2 speakers’. God knows what that’s about? 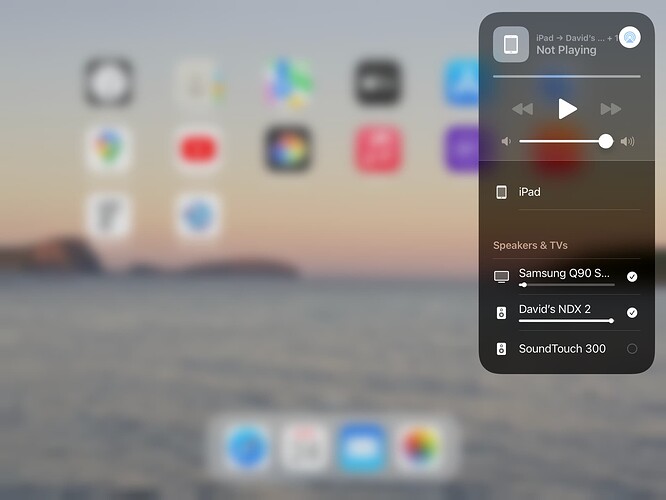 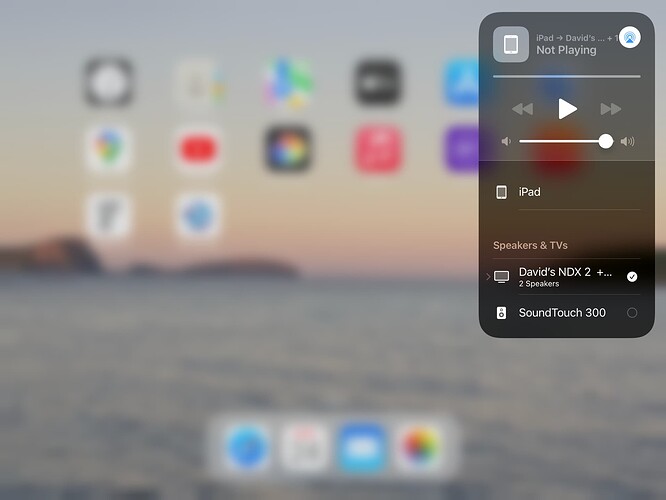 Sorry @XMB I forgot to ask, in your last message, did you mean the Apple TV app?

No, I was referring to an Apple TV box, which I now realise you don’t have as you are using the TV based App. In this case there is no way of getting the sound out other than via HDMI or optical from the TV. I don’t think the App in a TV supports AirPlay out.

Have you grouped any speaker in HomeKit?

Hmm, as a long-term AppleTV hardware user I have to say Airplay can be flakey at best.

If I understand correctly you don’t have an AppleTV set top box but your Samsung can accept Airplay of video content from a Mac or iPhone/iPad - either a predefined stream or screen mirroring.

Many years ago, and things may have changed, websites and video apps could specify if video content could be Airplayed or not - so you could view an item on iPad on a website or say in an iPad app but the content ‘provider’ could specify even on a per video basis if video Airplay was allowed.

If you are trying different content but managing to get sound on multiple Airplay destinations this might be the cause.

This might be something else entirely, but I have an AppleTV hooked up to a projector and even if I set it to output to my Nova rather than puny projector speakers it always seems to reset and we have to set the Nova as a destination again. I have a pair of original Apple Homepods which I’ve used until recently with the projector doing video only, for many things they sounded great, YouTube for some reason always caused issues with audio after a while, one speaker dropping out or video sync issues.

Appreciate your setup is different, just saying Airplay does not seem as robust as it should be.

More often than not if I have issues with Airplay then restarting the router and all relevant devices corrects the problem for a while, though not always. It may not be a networking issue but you may or may not have seen destinations appear more than once in an Airplay list which implies some network oddness!

The other thought depending on how you are accessing the Airplay options is that you may be in an audio only setting.

Apple also seem to do confusing things - my Homepod stereo pair are somehow linked to my daughter’s AppleTV and appear a Daughter’s AppleTV+Homepods in menus - I actually just want the Homepods to appear as a stereo pair not allied to anything else.

It really ought to be simpler and more intuitive than it is, but they really don’t care much about AV or audio as you will see from our laborious attempts to get lossless hires Apple Music to Airplay (you can’t currently).

Apologies, I’ll re-read your post again later as I may have got the wrong end of the stick, but unfortunately I have no TVs with native AppleTV/iTunes purchases playback app currently.

Sorry @XMB for the late reply. A lot has happened since your last message. I DO now have the Apple TV 4K device. I can now quite happily connect to my NDX 2.

Thanks for your help.

Yes, I can connect an optical cable from my TV to the NDX2, but the optical out on the TV is already being used.

You could try an optical splitter that will take a single incoming cable/signal and send output through two output plugs. I’ve done this successfully before.

Actually, there is another way if you have a dvd/bluray player with a coaxial output? Send the output from the ATV to the bluray via HDMI, send the bluray to the TV via HDMI and connect the bluray audio output to the NDX2. I do this and the audio is much better using coaxial from the bluray rather than optical from the TV.

Thanks for that info Mike.

I have just posted a new topic on the Home Cinema forum.

@DJM i have only just seen this thread and I have posted similarly info on your second thread. It might be that you could ask @Richard.Dane to merge them into one thread in Home Theatre re tv sound, before each gets too long.

Unfortunately it’s a bit late now to merge as the platform can’t cope with too many posts and images.