Albums bought for one track

I’ve bought lots of albums for just one track. Playing now Finding Forrester film soundtrack including Somewhere Over The Rainbow / What a Wonderful World by Israel Kamakawiwo’ole. Amongst others Alicia Keys for Empire State of Mind. Cat Power Jukebox for New York New York. A 70s compilation for Spanish Wine by Chris White, to name a few.
How about the Naim community?

Ha!!! Happened may times. Best result was when Amazon used to give you recommendations based on purchases - heard one track by a San Francisco band called Dredg, I now own all their albums on CD and 4 out of 5 on vinyl…
Worst that springs to mind was a song called Inside by Stiltskin from a 90s Levi’s ad - stunning track but let’s just say that the album has been gathering dust in my rack for 20 odd years now…

I have far too many to list, but some of the more obvious are as follows;

And I only got F, there’s still plenty left in my library.

I bought the single of Donna Summer McArthur Park because I really liked the Richard Harris version but never had a copy, until recent years.

Black, Wonderful Life, blimey that brings me back. Sadly it dident turn out so wonderful for him unfortunately 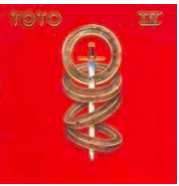 For so many reasons - but mainly because I love Africa

Africa is such a wonderful track, had I got to T’s it would’ve certainly been included in my list.

Not quite the same idea, but there are some albums I only bought for one track before finding I liked several of the others too:

Stevie Ray Vaughan and THAT one track?

Rosie Vela album for the Becker/Fagen track which totally escapes me at the moment.

Hang on, ‘So’ has got Big Time on it? Have you ever cranked that up? Tony Levins baseline is monstrous.

Mind you, I might be one of the minority who knew Excellent Birds from Laurie Anderson’s Mister Heartbreak for many years before I heard This is the Picture on So.

Excellent. The whole album is one track.

Which album have you? I thought Alone Again (Naturally) was a single. So guessing it’s a compilation such as the Berry Vest, but that has lots of great tracks, at least I think so. He’s still making great albums such as the song below which tries to answer one of life’s greatest questions.

Just checked. I only have the single, which one of the kids downloaded for me years ago (probably a pirate). But years ago I didn’t d have it on an LP but can’t remember if it was an album or hits thingy.

Yes it’s a bit of a losers song, I don’t play it much.