I am currently a new owner of a new ND5XS2 / XS3 combination. I am very enthusiastic about the sound of the system. Unfortunately, the problem of the poor balance (at low volumes you only hear the right channel) of the ALPS volume potentiometers has caught me. After consultation with my dealer, the only option is to repair/replace the potentiometer with a selected replacement part. Hopefully, this could solve the problem.

Alternatively, we also agreed on possible alternatives during the conversation. What do you think of the Linn Selekt DSM incl. amplifier as an alternative? Perhaps @Mr.M can contribute something here? I think I read that you own a Selekt.

I already had a Uniti Nova for a very short time. The sound of this one didn’t really appeal to me. I missed the details and the low frequency range was too undefined for me.

The current combination, especially after the firmware upgrade of the ND5XS2, has this under control in an excellent way.

Linn is also known for its detailing. Do you have any experience with the low frequency range? How would the two competitors compare? Linn is now completely digital (volume control, amplifier, etc.). How can such a device stand up to the good old analogue technology (unfortunately, this is where the problem lies)?

Even though I’m mainly among Naimies here, I’ve always liked the members’ willingness to think outside the box. I would be happy to hear any opinions, suggestions, alternatives, …

Hello, not been here for a while!
Yes I do own an Linn Selekt DSM and have been very happy with it. It has no issue at lower volume levels where I would mostly use it. It’s part of a TV 5.1 system but is used mostly for music and 2 channel playback. The other nice thing about it being you just plug it in and enjoy it, compared to my Naim system it is somewhat different so I’d encourage you listen to it to form your own conclusions but it is very fast and responsive and deeply musical in the bottom end as well, the Katalyst DAC provides potential for further refinements and can be swapped in as a seperate upgrade.
I liked the fact I could use it as a surround TV amp and it was modular to grow in to that and give a one box solution.

Outside the box - change the DIN-DIN IC to one with attenuation.
That will enable you to move the volume pot further around & out of the imbalance area.
The only supplier that I can find on www that supplied DIN-DIN attenuated cables is Russ Andrews. russandrews (.) com
The DIN cables with attenuation is listed in the www catalogue as PBJ Type E (5-pin 180 to 5-pin 180) & have a selection of attenuation values from 11dB to 22dB & a few different length options.

You could swap in an rca interconnect and some attenuators to see if that gets you into the right ballpark. If you avoid the ‘audiophile’ variants it’s a cheap test.

I will have a look at it. Thanks for the tip.

I also had the idea of lowering the input sensitivity of the amplifier. At first I was hoping that there were inputs on the XS3 that might have a lower sensitivity. Unfortunately, that is not the case!

The other possibility is to reduce the output voltage of the streamer and that’s where you come in. Great tip. Many thanks for that.

Nevertheless, I would be interested in further opinions on the Linn Selekt DSM

The DIN PBJ TYPE E might be worth a try. Now the question remains what effect the different attenuations have. In other words, how much leeway is introduced? There are various possibilities from -11db to -22db. Any suggestions?

NAD M33 would also be an option with similar specifications as the Linn Selekt DSM.

I made my own attenuation box (not a cable) for use on my 2nd system Naim-2, I set the level at 15dB, yes it works well, but if I was doing it again I would go for something higher, 19 or 22dB.

I compared the Selekt DSM to a Nova at my dealer. Imo the Nova outperform the Selekt. I’ll also say that I’m a satisfied Linn owner since circa 30 years.

If you want to be controversial, turn on the ND5XS2 variable output…

I can’t speak for an attenuated cable, but with my own made attenuated network I used larger resisters than is possible to install inside a DIN plug, this enabled me to select better high quality with a good SQ reputation.
The effect on SQ was very positive, I concluded this was most probably because the volume pot position was now in an area where channel balance was good.

I used a Linn Klimax DSM for 6 months recently and the volume control is 192/35 which is overkill. Digital volume is one multiplication followed by dither. If you do the dither right (as I think Linn does) the are no sound issues at any level I could hear. But many cheat with the dither to save DSP-power - the effect of truncation is clearly audible even on a 24-bit bus. Even pro digital mixers cheated with this up to 5-10 years ago.

What is the effect on the sound of a attenuated cable?

You know the answer is going to be ‘it depends’…

If it is well made with suitable cable and components for the purpose, and doesn’t mess with the impedance matching, it’s not going to have a ‘sound’ of its own. If it changes the gain staging so that the electronics are operating in a better state - including sorting channel balance issues - then it might sound better. But there are lots of ifs and buts.

Try turning on the variable output. It’s free, and it might be fine.

I feed my ND5XS2 from Roon with volume levelling levelling turned on, with a -23LUFS target average, so the ND5XS2 sees an attenuated 32bit input, but with the variable output turned on so I can control level from within Roon. The ND5XS2 processes everything at 40bits anyway before outputting to the DAC at (I think) 24bits.

I don’t have enough black boxes to hear any degradation…

i tried this yesterday. In the Naim app I set the volume control to variable, then in Roon the volume to 50 and now I can very nicely adjust the XS3 volume control between about 8 o’clock (low volume and both channels

) and 11-12 o’clock (the neighbors are getting restless

). I will listen with the setting for a few days and be happy. Then we see further.

Nevertheless, I would like to receive from my dealer an amplifier that works perfectly in all respects. Even though I am in the lower price range for Naim, one can expect a flawless device. Quality assurance must also work here.

But the most important thing is to have found a proper forum with dedicated help!

If you dont want to juggle multiple volume control settings you can achieve the same function in roon via dsp>headroom and leave roon to output a fixed volume. 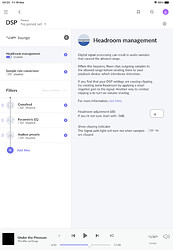