Last year (or was it the year before?) we received a lot of mail from Solicitors and a Building Society. These all had the same house number and street as us, but were in a nearby town. I did the usual thing and put them back in the postbox marked that they were not for us. Eventually I opened some, and contacted the sender(s), and managed to sort out that the person was buying a ‘new build’ house, which wasn’t completed, and persuaded them to send the mail to the address where they were actually living.

In the last couple of weeks we have started to receive packages from Amazon addressed to this new build address. I looked up the name and address online, and found a land line number. I have tried to call this multiple times, with no answer. My eldest daughter says this may mean that the number is just for a landline which is used for internet only, and that these numbers will appear to ring, but of course there is no actual phone attached.

No such thing as a mobile telephone directory, so I can’t try that route.

I caught one of the Amazon delivery men earlier this week delivering a package to me, and there was also a package for this other address. I managed to make him NOT deliver it to me, but it has reappeared on our doorstep today. Never rang the doorbell or knocked (sigh)

I decided to contact Amazon earlier this week to try to resolve the problem. No way of doing it via their website AFAICS unless you actually have an order number! Eventually managed to track down a customer service telephone number, which seemed to connect to one of those overseas thingies. Certainly the person I spoke to did not speak English well.

All they would say was that I could either keep the articles or give them to charity. I asked if they could give me the person’s email address or forward an email on the problem to the purchaser. Apparently “we don’t offer that service”

I’ve tried looking for the house when in the neighbouring town. Nobody in that area seems to know where it is. I assume the post office must know, because we’re not receiving letters for them anymore!

I despair. Poor customer service. They don’t seem to care about the poor s*d who isn’t getting their packages. Why is it so difficult to speak to a real person and get a straight answer?

Have you tried to look up the other address on Royal Mail? Perhaps you’ll have to write them a letter!

Why is it so difficult to speak to a real person and get a straight answer?

Mr Bozos didn’t get to be the richest man in the world by employing people to answer the phone.

Royal Mail must know where it is, because we don’t receive anything for them addressed to

Sorry to write that address, but all the circumlocutions become tiresome. BTW - Shobnall is “a civil parish within the boundaries of Burton On Trent”. I know where it is, because it is very close to the hospital where I worked before before retiring.

I assume the emergency services must know where it is. I’ll have to drop into the Royal Mail sorting office in Burton On Trent and ask them. I’d phone the Royal Mail, but from long experience the sorting office never answer their phone. Alternative solutions are to ask the local police station if they know where it is, or as Gavin says, just write to them - but with my luck the letter might finish up at my house!

The real problem is that if you look up the postal code in Maps on iPhone it doesn’t find any link. Google maps gives a location in a part of Burton On Trent which is definitely not in Shobnall. And Maps on iphone if I enter 8 Oak Road, Burton On Trent it directs you to my house in Barton Under Needwood.

How often do these GPS maps update their databases, I wonder?

My daughter says ‘just keep the packages’, but that feels wrong to me.

I think write to them at the address you have and give them your phone number so they can contact you. You could include a print of a photo of their packages, which would get their attention.

I notice that if you put the postcode into the google maps app on iPhone (it’s a free app and better than the Apple one imho) then it gives you a map of the exact area where the postcode is, and as it’s new build it shouldn’t be too hard to find. There is probably a show house or a developer’s board which would give you a number to ring where the person would probably know.
Best
David

Alas, where Google maps show the location is NOT in Shobnall, and there are no new builds that I can see at the location marked (I checked). I’d already tried that, but thank you anyway. I’m going to write to them. I just wish there was a telephone directory for mobile numbers.

I suspect the problem is that when a new property is built, the Land Registry take time to update their records, and then other parties have to update theirs in turn, and in my experience this can take a couple of years or more.
If you tell Amazon your parcel hasn’t arrived, they generally send out a replacement without a second thought, so the account holder may have done this, and either he, or you, might have received the replacements.

Land registry have a record -

If you do a search on Streetcheck.co.uk it gives a location, then warns you that this is provisional data and there may be delivery problems!
Their map does show adjacent roads which might help

Zoopla shows that 8 Oak Road DE13 0QW sold for £225K in July 2018, which seems to line up with your earlier experience of letters from solicitors etc.
Best

We moved just under two years ago and the postcode for our new house wasn’t always recognised. One day amazon would deliver correctly, the next they’d deliver to a house some 5 mies away. We contacted Amazon, they apologised, but it still happened occassionally for a few more months. We started getting things sent to a collection point to avoid issues. By and large the postcode and sat nav thing is sorted now…until today when our bank said it had no record of the postcode. Letters are easily sorted by return to sender. Parcels not so easy. Tis a pain though.

A 5 years ago NatWest refused a debit card payment for my PRS Paul’s Guitar. Still made the purchase by going into the bank and withdrawing £3500 in cash. Turned out they had my the wrong date of birth for me on their computer records. Very strange, because we’ve been with them for more than 40 years (albeit not always with the same branch). Took a couple of days to sort it out, and I got no apology for the embarrassment THEIR error had caused me.

Don’t know why they had the wrong date, but I did note that the DOB was recorded by them as identical to SWMBO’s!

I’ve just done the Streetcheck search, and it shows the property to actually be in Horninglow, not Shobnall. So much for the postal address being correct!

Anyway, I’m just about to compose a letter to them telling about the delivery problems…

Just a thought as I do not know the area, could there be a bit of estate agent exaggeration going on? Certainly in Bristol there are localities that never seem to be mentioned these days, but seem have to crept into desirable areas.

Possibly. Sitting here patiently waiting for the owner to reply to my letter.

Do people still write letters. Whatever next they’ll be playing vinyl again. 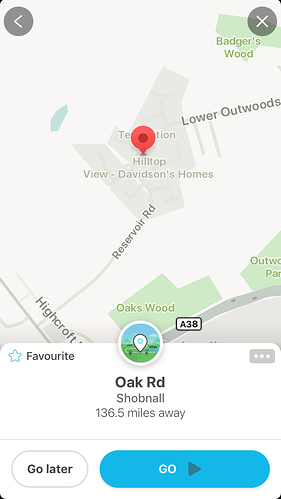 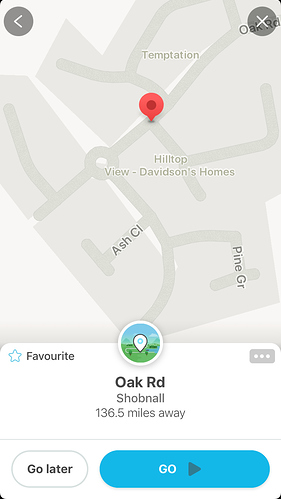 I think I found the place via Waze

I know where it is. Still awaiting a reply to my letter. Damned if I’m going to make a special trip there to see them.

Ahh, ok I thought I read that google maps showed it somewhere else so was trying to help