How can I play Amazon HD music through my Nova?

You cant. You can only play 44.1/16 via airplay and HD doesnt support Chromecast you get sent MP3 when using it.

Only way is through their box which is capped at 48/24 if I remember rightly, or use a windows pc with a USB to Spdif converter. Windows app now has exclusive mode can’t vouch for the mac one.

Ok… thought the HiRes was their Ultra level.

HD is that ultra level always has been. It’s all one level now anyway. They copied Apple and dont have two tiers anymore.

Just trialed this again now they have one tier. it’s impossible to know when casting what your getting it doesn’t give you the info it use to drop to MP3 before but this sounds better than it did last time I tried it via Chromecast but it’s dropping out all over the place can’t play a single track. Use Roon to Chromecast it’s perfectly fine. So somethings broken with it on Naim or its thier side.
@stevesy any chance you can test Amazon HD via Chromecast to see if this is an Amazon thing or its an issue with casting on the Atom.

I added a Bluesound Node 2i to my 272 to get hi-res music streams and started with Amazon HD. However, I found that you can’t play anything on the Node 2i using the Amazon music app so you have to use the BluOS app. That seemed fine at first; you can create playlists in the Amazon Music app and these then appear (as if by magic) in the BluOS app. I was creating a playlist for each artist and could then pick an artist and then album, etc within the BluOS app.

Then I noticed that as I added a playlist (i.e. artist), playlists at the end of the alphabet started to disappear. After a bit of research I discovered that Amazon limits the number of playlists that can be held in the BluOS app to 100 (at least that seems to be the consensus on the BluOS forum). So I got fed up and now use Qobuz; much better UI and it sounds great!

Biggest reason I ditched it after the trial - just couldn’t find an easy way to play anything above CD quality without additional hardware.

I sense we may see the same with Apple Music.

Well it’s certainly the case right now it’s use a pc to external DAC or nothing. Even then not sure iTunes or Apple music has an exclusive mode or is bit perfect it certainly isn’t if its using system audio.

Well it’s certainly the case right now it’s use a pc to external DAC or nothing. Even then not sure iTunes or Apple music has an exclusive mode or is bit perfect it certainly isn’t if its using system audio.

I suspect >99% of Apple users won’t care in the slightest, so little incentive for Apple to change.

I think it would be nice to have more options for the new streamers, hopefully if Amazon integrate with more hardware devices it may nudge Apple to consider this.

I dont think you will see it in the same capacity as Tidal or Qobuz they have a very different agenda for it. Even Bluesounds integration is pretty lame when I tried it and I still hade the Node 2. The tech companies are the ones innovating in the delivery music thse days and not Hifi and thats what is very worring. They have a very different apporach , its not for the love of music or getting the very best performance its about getting peope away from the traditional setups and into theirs . Its about convienence, data and eco system growth. This makes me very sad.

I haven’t got 100 playlist so I haven’t found that limitation. My largest playlist on Amazon has 3000 songs though and the 2i handles that OK.

Re the hd and ultra HD, again my 2i displays that and my qutest confirms via the orange or green light which stream rate is being played.
Edit: Blue led (192) just lit for an Otis Redding stream on Amazon HD so I guess that some of the older stuff is being re released in hi res. 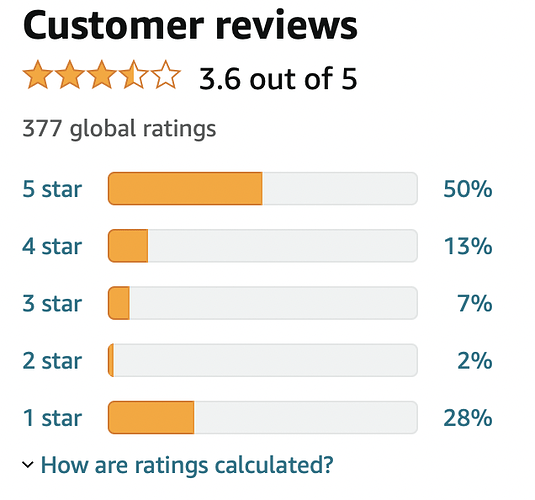 It’s a bit embarrassing the Amazon Music App doesn’t get a very high rating - they may need to do some work on this beforehand.

*NOW that is embarrassing

The Talbot Horizon was car of the year in 1979.

Fortunately I used my brain and not other people’s opinions.

@stevesy any chance you can test Amazon HD via Chromecast to see if this is an Amazon thing or its an issue with casting on the Atom.

You didn’t quite reach Steve with this