So I’m curious here, the American football team from my home state, Denver Broncos, will be playing in London this upcoming Sunday. This is a rather larger sampling size on this forum with quite a few interests across the board, but how many on here have interest in this sport in the UK? The game in Colorado will be played at 7:30 in the morning due to the time change and it seems as though the intent is to bring this football to the UK and abroad. Would there be interest in a team from the UK or seeing more of these games played there? Have a great evening!

There are a number of NFL games in London each season. Tottenham’s stadium was built with the ability to convert it into an American Football pitch easily. The games are usually sold out. Not followed Denver much since Elway stopped playing. There have been attempts at a European league, which included a London team, but the intention now is to maybe franchise a London team in the future. 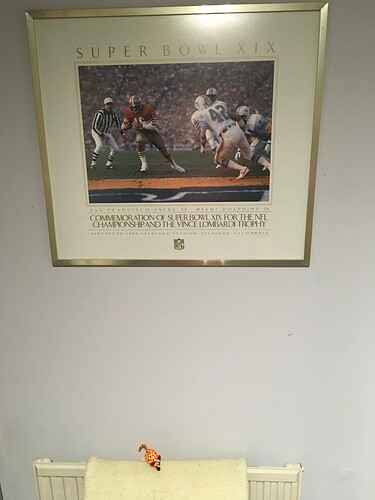 Can’t get to the game as I’m working and can’t get the day off. Saw them play at Wembley on their last trip over. 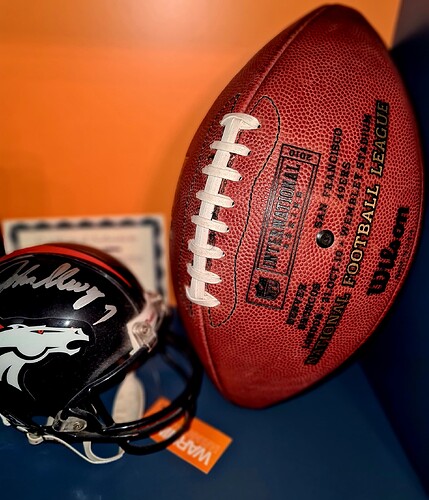 Wonder will be the starting QB on Sunday… 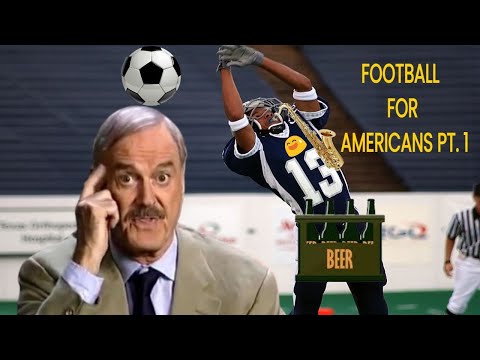 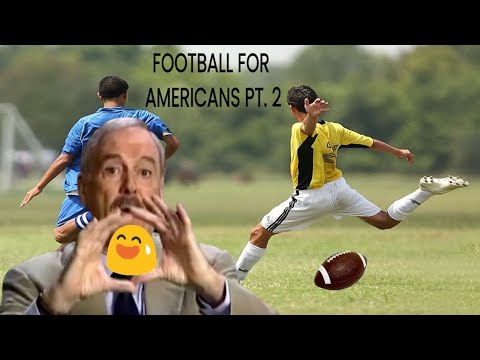 I found a love for the game thanks to Channel 4’s (UK) coverage in the 1980’s, usually shown on a Sunday afternoon IIRC.

The first live game I attended was in 1987, LA Raiders vs Seattle Seahawks in the LA Olympic stadium (Seahawks won). On the same trip I also went to a college game near to Newport Beach (Orange County (I believe?) and tried to get a quick look in Denver’s Mile High Stadium (not during a game) but we were refused entry because of the NFL players’ strike.
On a trip in 1989 (I think) I got to see the legend Dan Marino and his Miami Dolphins beat the Cincinnati Bengals at the Joe Robbie Stadium.
On another trip in 1991 I couldn’t get to any games but had a couple of stadium tours in Houston Texas (the Astradome) and then in New Orleans (Superdome).
I’ve only managed to get to a couple of games so far in the UK, both at Wembley.

DSCF1731 (2)1920×794 147 KB
There’s a tremendous appetite for the game in the UK now. An NFL team based permanently over here would sell out their tickets several times over, but in reality, the logistics of bringing teams over the pond with any regularity is likely to be problematic.
1 Like
CalamityJack October 26, 2022, 12:21am #7

According to one website there are 13m NFL fans in the U.K., and 4m of them are ‘avid’ (not defined) fans. The games that have been played here have played to attendees up to the 80,000 mark.

How this translates into franchises or the future of the sport over here, I don’t know. Anecdotally however, I do know a surprising number of interested parties, and know people who’ve been following NFL since the ‘70s although I’m not one of them. That’s probably just as well - my wife being from Chicago would expect me to follow the Bears.

These are great replies, thanks so much! I had no idea it was so popular over there. It’s big business for sure here in the states and we enjoy watching as a family most Sundays. Broncos haven’t been relevant since they won the Super Bowl in the 2015 season which has been tough for fans here. @steviebee I think Russell Wilson will start on Sunday but no guarantees he will play the whole game. It’s entertainment and Russell loves the spotlight. Not sure there are a lot of happy Broncos fans though with him right now.

There is a sense of deja-vu here in that there was a European American football conference (league) many years back (late-19880s/90s) which proved not to be financially sustainable - perhaps due to quality. IIRC, the London Monarchs team played at Wembley, at least initially.

I’m a big NFL and New York Giants fan and have been since the ‘80’s.
I am in a Fantasy League with a group of friends and family and our Sunday evenings revolve around watching the games.
This same group of people which includes my Wife (Carolina Panthers) and Son (NE Patriots) also follow NHL Ice Hockey.

Another Giants fan who got on the bus in the 80s - remember Nicky Horne and Miles Aitken on Channel 4? American football has been blessed with many excellent presenters over the years which has helped enormously. I used go to every NFL game in London as well as the Monarchs and even followed our local team the Bristol Packers (formed by a former Green Bay kicker).

I like the game and been following Seattle for 30 years but i cant see a regular team surviving here. Its fine for a few games a year where people will come from around the country as an event but try to make it bi weekly fr a whole season and i think youll see attendances start to dive off and in a relatively few seasons become untenable.

There was talk of trying to make a european division with a team in UK, Germany, I think Italy and im not sure the other country. That may have slightly more success rather than just one international team but im still very sceptical if it would ever work outside the US in the long term

which proved not to be financially sustainable - perhaps due to quality.

I’ve been told the main issue was that the teams became American rather quickly. US players and coaches not even near good enough to make the US NFL teams made the best European players look like amateurs. I guess because everyone has been playing it since being little.

Perhaps they should have introduced a rule to have a minium amount of European players, but as they didn’t, the teams were European in name only with essentially every single player and coach being American.

And without local players to support it just didn’t catch on with the public.

My personal issue with it, the same as with the Super League, is that it’s a franchise, not a meritocracy. I like it if sports have league’s with relegation and promotion.

The NFL’s International Marketing Programme was launched during the off season with mixed reactions.

The map below shows what the League think should be the international affiliations. I think it backfired on them somewhat, as you can’t tell people who you want them to support.

It does however show that they are trying to build market interest across the globe as more and more people connect with the NFL and the Teams. 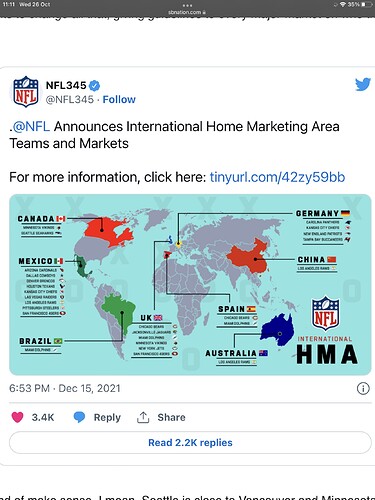 From what I’ve read, the quest for international expansion in interest (supporting broadcast syndication fees) and participation (the outside-US combines), has been driven by the softening of public interest in the US, with the TV networks looking at their rights costs very closely (noting it’s spread out across the broadcasters).

I recollect all the marketing bilge from the 1980/90s, there being so many issues e.g. playing American footie on a wet grass soccer pitch at Wembley being one, often just before other events. American football isn’t kind to pitches in such conditions.

In the UK, football (soccer) remains the dominant sport and even that’s getting frustrated with VAR delays. Rugby Union is under financial pressure, and also social pressure re physical health matters. Against this backcloth it’s challenging to see how the NFL could attract a regular spectator base, with matches which are very long with numerous breaks, for a sport which has its own medical issues. Added to which, as history shows, the local franchise players are highly likely to be US in origin, many having been de-rostered from other teams.

Of course, Sky provide wonderful pay-walled coverage in the UK and the BBC and ITV have only played around the edges.

London will support a few NFL games each year to sate interest (plus say Manchester too?) but that’s far different from having a team based here.

@QuickSticks – that’s been commented on quite a lot on TV, often with rolled eyes. IIRC, it’s a carve-up of the globe for team to promote themselves and the NFL – but it’s such a bald message. As you say, it’s not good messaging for many fans/followers, as it simply confuses and, potentially, annoys.

My heart sank a little when I heard Wilson had been signed, I must say. I’m no psychic, but something didn’t quite fit. Seems I was right to some degree…will he improve…dunno…will I keep the faith in the Orange and Blue…you bet!

All very fascinating replies and thoughts. I personally don’t understand how it would work with a franchise team or two in another country. The NFL is big business here and always looking for more money elsewhere. I think if players were groomed into the sport from a young age and there were local and regional talent in the league from abroad, there would be a higher attraction long term. Right now it’s just a novelty for those abroad, no different then if a premier league game in the U.S? Has to be relevant though like these games are for the NFL teams. There are only five games this season in London. I’ll be tuning in early on Sunday morning though to see it live so can’t wait. It would also be cool to travel to watch a game as it would be with a concert. New venue, new local themes, etc.

The rumour mill was working overtime in the last couple of seasons regarding the Jacksonville Jaguars becoming a London franchise.
I guess nobody could really fathom how this would work, because that particular rumour seems to have gone quiet in the last 9 months.

I think (but stand to be corrected) that, although there are 5 ‘International Series’ games, only 3 of them are in London (2 at Tottenham Hotspur’s ground and 1 at Wembley).
I believe the other games are in Germany (Berlin?) and in Mexico.
I would love for there to be five in London. Then I might stand a chance of getting a ticket!

Womens American football is a bit different to ours.
I could get into watching this 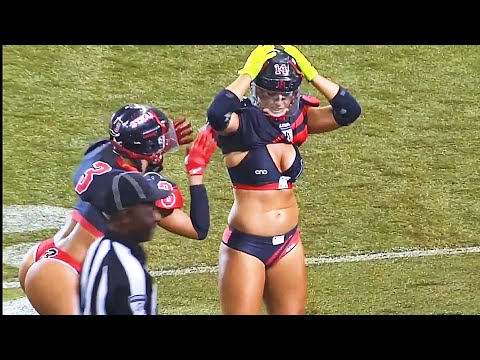