To be fair to the ladies, skimpy costumes aside, they can all play! 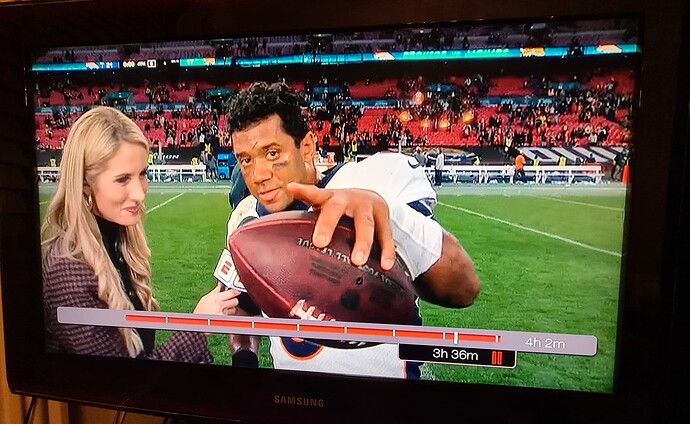 …a little early to get excited when two teams with records of 2 wins and 5 loses to think the winner has turned the corner.

Still a win though. Going into a bye week now and maybe the team can gel now. They’ve been so tight because of expectations for the season. Fun to watch on a Sunday morning eating pancakes!

Who could have predicted that final scoreline after the Bronco’s first-quarter performance? Don’t think I’ve ever seen a team so intent on shooting themselves in the foot. Did they set an NFL record for the number of penalties in one quarter?

Fun to watch on a Sunday morning eating pancakes!

We do things a little differently over here; a Cornish Pasty and cup of tea was the preferred half-time intake for me.
I hope, from an American perspective, that they feel that the Brits are doing their national game justice with our handling of the games on this side of the pond.

Agreed, but I was talking about Wilson, who had thus far played well below his capabilities this season.

Eagles fan here, having a better season this year than last…

The Eagles and the Bills are definitely looking like the two class teams of the NFL so far. I wouldn’t like to bet against either (or both) reaching the Superbowl this season.
Can the Eagles stay unbeaten through the regular season or, as discussed by Jason and Osi on the NFL show, would it be better for them to lose one before they get to the playoffs?

I think that the reality check of an Eagles loss could happen, but obviously hope it doesn’t! There’s still a way to go before the playoffs and we need to be consistent and avoid injuries if we are going to progress.

Better to have a loss in the regular season than in the playoffs though (sudden death)!
The point Jason and Osi made, was that after a loss the coaching staff are more likely to address issues seen during a match in the next training session, whereas if the team keeps winning these issues just get ignored. I can’t quite get my head around that one. Surely they would work on ‘problem’ areas regardless of win or loss.

Another game from the International Series this weekend as the Seahawks take on the Buccaneers this Sunday in Munich. Shame (for the Brits) that this game wasn’t scheduled for the Spurs or Wembley Stadium. It would have been nice to see ‘The Goat’ Tom Brady one last time. Surely his last season?

Tampa Bay vs Seattle in Germany. 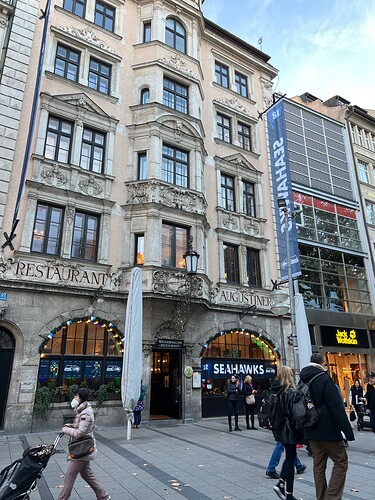 Last Monday night, out for a drink with friends, I spotted a commentator in front of what I thought was the Munich Rathaus… turned out to be pre-game chat for this Monday’s “away” game.

Arriving here in Munich yesterday, I spotted these Seahawks flags out in front of the historic Augustiner beer hall on the main pedestrian shopping street. There’s a few other posters and flags around, and a huge display of jerseys on sale in one of the sports stores.

Apologies. Of course, I meant 'Buccaneers (post now amended). For some weird reason I was thinking ‘Tampa Bay Patriots’. Duuhhh! Force of habit I guess to associate Brady with the Pats after 18 years there.

So Washington hand Philadelphia their first loss of the season. Interesting, considering their first meeting in week 3!

Watched the first half live of the Eagles v Commanders last night and the second half this morning.

At half time I had the feeling Philly were going to lose. Washington tactics to hold on to the ball as much as possible and eat up the clock had worked, keeping Jalen Hurts off the pitch and curtail the Eagles momentum.

Hopefully this will be a wake up call and make us better prepared for the next game against the Colts.