This might be a case of conflated mis-remembering but…

Back in the 70s I was Floor Manager for Laskys Hi-Fi department in Oxford Street and 99% of the hardware was Japanese (and 98% of the speakers were British with a small Hungarian twist). But I’m sure I remember a British cassette deck, but can’t recall by who.

It was a top-loader, which had no covering - you inserted the cassette directly and it had a detachable clear perspex covering for the mech. The mech was Japanese, but the electronics were British and the styling was firmly in the Nytech camp.

It was expensive, sounded sublime (we had to be cautiously scrupulous demming it as that branch positively crawled with secret shoppers from Sony Corp. making sure they were on top), was a nightmare to dust (like the Nytech receiver), and we sold a total of zero.

Anyone remember who made it, or any other details? Or is this a demented fantasy? 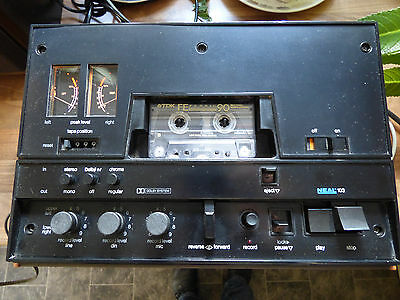 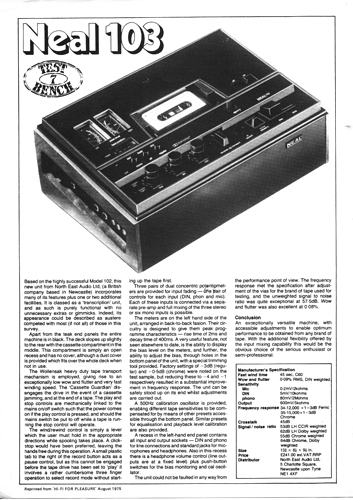 It was so hard flogging British gear - just trying to get someone to listen to the stuff was next to impossible at that place.

I was about to say, a Neal 103. And funnily enough, I have one! Very good for its day, based on the Advent and with a huge flywheel. bias and EQ could be adjusted by screwdriver for most tapes, but obviously not for metals which hadn’t arrived yet.

You’ve got everything!! I think we are all showing our age here.

Bias and EQ could be adjusted by screwdriver for most tapes, but obviously not for metals which hadn’t arrived yet

Crikey, I remember that now. Very hit and miss, but when things were right it sounded great.

And why am I not surprised you’ve got one! The Finchcock’s of tape

Funnily enough, Finchcocks is just down the road…

I used to have a 102 and never knew it was based upon another brand (though I knew it had a 3M Wollensak mech). So thanks to Richard I’ve learnt something new.

I now have a NEAL 302 Mk1 which uses the same main circuit board as the 102/3 but interfaced with the later ‘logic controlled’ mechanism via a daughter board with relays on it. The 302 Mk2 had a revised board which rationalised things to do away with the adaption of the 102/3 board and also introduced a slightly improved mechanism. The top version was the 312 with Dolby HX-Pro but these are rare beasts.

Great deck with a great sound. Mine came from duties in a laboratory for which it was well suited to data logging - it has a very tough mechanism which can withstand regular on/off cycles and is easily interfaced to controlling equipment via the front panel DIN socket. 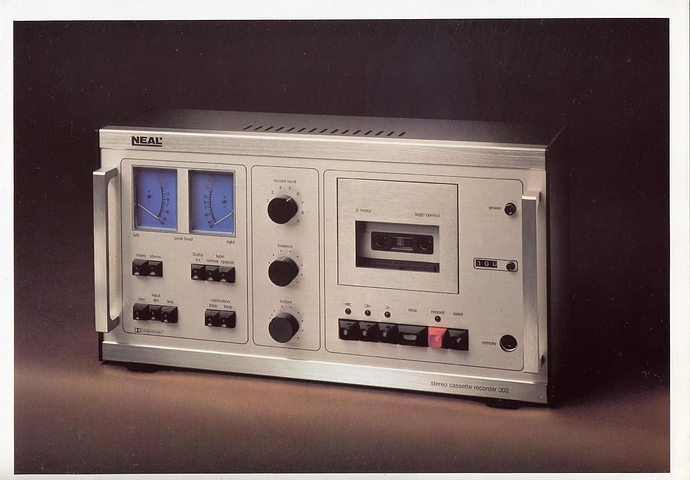 Neal also went on to manufacture and supply almost every police force in the country with its interview dual tape recorders. Complete with audible buzz lead in…

According to the Museum of Magnetic Sound Recording’s online Ferrograph history pages;
1977 Falling sales resulted in heavy financial losses for the company. In order to safeguard jobs the National Enterprise Board arranged a marriage between Ferrograph and North East Audio Ltd (NEAL). Wilmot Breeden sold the Ferrograph company for £500k

Just googled Ferrograph and see they are in the business of digital signage systems.
Not hifi anymore

Richard, how do I send you a private message? Not being an expert on this forum/social media stuff?

Just flag one of my posts and add a message.