Any ideas for upgrading please?

Hi
I have sat and looked at my not working hi fi gear for years now as i had other priorities or so my wife told me.
I have an LP 12 with Lingo, cdx cd player, nait 3 amp and neat petite speakers and a mile of cable which the dealer insisted I buy back in 1993 or so.

My LP 12 needs servicing so will do that eventually. The nait 3 bit where the speaker jack goes in has bent inwards and is unusable till fixed. the cd player in theory works according to the hi fi shop I think the laser is dodgy as it would stick on on some cd’s which play perfectly well elsewhere.

I want to start with fixing the amp but I would also like to upgrade it to work with a power amp has anyone got advice please or should I trade it in and get something else. Everyone here seem to be ‘serious’ hi fi people whilst I’m not as you might have guessed and so picking your brains is my objective. I love the physicality of records and CDs media and have no interest in these latest devices that stream music (whatever they’re called).
Are there any amps that have bluetooth as id love to be able to choose to use headphones if i wanted too, back in the day I was told such things weren’t built into serious hi fi (I’m talking headphone socket holes).
Thanks!

Nice stuff you have there. Like you I like physical media although I do steam a little in my back room. I can’t advise on Bluetooth I’m afraid but I would have thought the answer would be to buy a separate headphone amp.

With regard to your existing stuff I would suggest along with the LP12 you have the Nait services. With the exception of the earliest CD players Naim service all their products. On the other hand trading for a Nait XS3 or SN3 would give you a quality integrated with headphone facility. You don’t really need a separate power amp.

I’m sure if you remove the cover from the amp it will be a simple fix.
I’m not sure if you can add a power amp to the Nait as never had an integrated one. Do your speakers actually require more power as I’ve heard the Nait is a good performer.
You have a great deck and I’m the same as you and have no interest in streaming.
You could buy a headphone amp which will connect to the Nait and you can get a budget one pretty reasonably.
Your CD player might just need the laser cleaning so it’s worth giving that a go first.
I’m trying to remember your questions now as I can’t see it whilst typing.
If you do upgrade you will need to give an idea of what sort of budget you are looking at.

If you have had your system since 1993 then my advice is don’t change anything.
As you have already decided to do with your LP12 I’d get both the amp and the CDX serviced Class A in Sheffield are Naim approved and cheaper than Naim themselves.

If you are determined to get a power amp then I believe the Nait can be converted to a pre amp so that you can add the Nap 90 matching power amp.

For headphones I’d probably get a seperate headphone amp as LindsayM suggested above, there are on the market headphone amps with built in DAC’s that also have bluetooth.

Or if you are wanting to use bluetooth headphones then a bluetooth reciever can be connected directly to your amp. I have just bought one that connects to a Dac and then an amp in a small second system.

although I do steam a little in my back room.

Thank you very much for this advice Bobthebuilder.

I now recall the mention of converting the amp into a pre amp when I bought the stuff initially but had forgotten the nitty gritty of what he said ( it was 27 years ago…gulp) and the potential of adding the power amp at some point. I don’t actually know what the reason is for doing this but suspect it’s just to get another black box :-)Is it going to improve anything? Do I gain anything from doing It I don’t know. I think it has something to do with not having a chopper bike as a kid and having to have a chipper instead!
I think the shop you mentioned in Sheffield sounds just the ticket and I will definitely call them to move things forward. I will look into your other suggestions too as these sound great. Thanks again.

The Nait 3 is a great integrated amp and quite punchy as I recall. I don’t think it would be worth converting it to a pre-amp and adding a Nap90 Power amp though. Bear in mind you would probably need to get the 90 serviced too if you picked one up. If the pre/power thing is an incurable itch I’d be inclined to sell the Nait and pick up an original NAC92/NAP90 combo, or better still NAC72/NAP140 for a bit more outlay. Check for service history and factor that in if you do go that route. Serviced items will be a bit more expensive but it usually works out cheaper than buying unserviced at a lower price then getting the servicing done yourself.

Thank you for your input marksnaim
I will bear in mind what you have said I really appreciate it and will weigh up my options.

Hi Lindsey
Thanks for your reply. I remember when I bought the stuff I felt physically sick about the cost of it all, then I heard how the dealer who sold me it wouldn’t be coming over to set it up as promised as they had to fly off to the south of France to set up a £27,000 system. I realised I was small beer, still, l felt like a King despite that revelation.
I stream too because it allows me to hear all those albums I otherwise would never hear. If I like, then, I buy them in physical form. It’s still a great invention, streaming. I buy cd’s as they’re cheap and I remember when it was all the other way round and vinyl was dirt cheap which I bought till the bitter end. I also hated getting creases in album covers which was the only OCD behaviour I had but it drove me mad all the same.I held onto my vinyl ways till my CDX in 95 what a joy that day was!
As I said to one of the other people who replied to me I haven’t a clue as to why one has multiple black amp boxes so your thought on the Nait XS3 or SN3 is a most welcome one. I presume it’s all about the speakers your’e pushing the sound through.
Many thanks again.
Paul

Hi Roland,
Thanks for your reply. The Nait does work well and I don’t really know why I would add a power amp it just seems like a way to upgrade something. What do I know? I remember the hysterical laughter from friends who asked me what an external power supply with just an off /on button did for £700(?)(Lingo). I said" I hadn’t a clue… the guy in the shop said it was a good idea " I laughed with them as I could see where they were coming from(emperors new clothes etc), but what I couldn’t explain either was the sheer agony of saving for these things and the pure joy i had got from finally having a toe in the door of this big world of expensive hi fi gorgeous stuff ( no extra buttons etc) I guess we have to be excited about something or we would be very miserable!
Thanks again.

Oh My God emueggs! A fellow Chippy owner we are a rare breed indeed everyone remembers the Chopper but only a very small minority admit to owning a Chippy.
it was Christmas '74 or '75 my older brother got a Chopper and I got a Chippy.
I’ll never forget putting too much air in the tyre at the local garage and the tyre going pop. Mine was blue like this, much smaller than I remember. 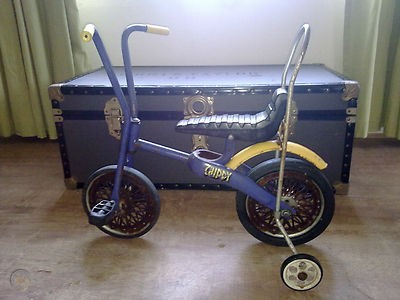