Anyone using Vandersteen 2C's with Naim?

Hi,
I’m currently using Vandersteen 2C’s with nothing. I sold my previous integrated (Krell KAV-300i) and I’m in the market for a new (used) integrated and cd player. The Krell sounded ok, but it’s biggest problem was too much boomy bass. I like bass, but rather deep, detailed punchy bass. I think too the Krell was overkill for my space. My room is roughly 12x12 with an out-cove that is another 4ft deep and 6ft wide. My speakers sit on one of the 12ft walls (with out-cove to my left when seated). The speakers are placed according to “Vandersteen’s Math” per the directions in the manual. I love the Vandys and have had them a long time. The best system I ever had on them (to my ears) was combination of a Creek 4330SE integrated, Naim CD3.5 cd player with DH Labs Q10 speaker and custom Air Matrix interconnects. This was years ago and I regret ever selling that system.

Anyway, with my budget, I was thinking of pairing a Naim Nait 5si with a CD5x. Or, the CD5x with a Simaudio Moon i5 integrated. Or, with possibly some McCormack gear (DNA-125 & RLD-1).

Anyone use Vandersteen speakers with their Naim gear? Any comments on these gear pairings and how they would sound with the Vandys? I did have a Nait 5i (non-italic) with the CD3.5 for a short time. However, I didn’t like it as I felt as if it was all midrange and little bass response and depth. I’m wondering too if the 5si is the same or if it is worlds better than the original 5i? The 4330SE was laid back in the mids, but had punchy, tight bass. The CD3.5 was full sounding with PRAT; and that pairing blended everything together nicely. I’m trying to create that again.

The 5si from my experience is very similar to the i (both versions). Never really liked any of them. The original Nait 5 was nice, but a little under powered and I prefered the Nait 3 to it. If you’re not averse to hitting the used market, a pre loved XS or even a Supernait would probably fit the bill nicely.

You don’t really see Vandersteens much on this side of the Atlantic. However, When I travelled for Naim I often saw and heard the combination of Vandersteens and Naim, particularly from Montreal dealer Codell Audio, who usually had a Vandersteen and Naim system on demo and at shows. I’m afraid I cannot help with any specifics, but I do recall really enjoying one Vandersteen and Naim system at the Son et Image show - edit: I even found a picture online, which shows it was a CD5i with NAIT5i and Vandersteen 1Cs. Everyone was talking about how great that modest but musical system was for the money, as I recall. 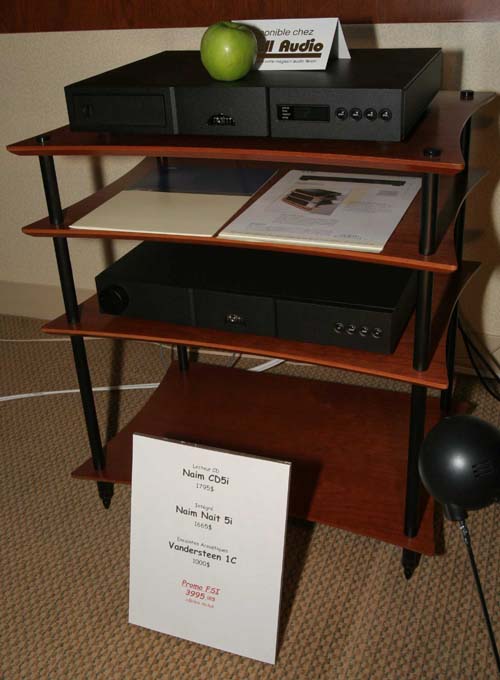 Thanks for the post and the pic! I figured after I posted that question there might not be anyone using Vandersteens in the UK, or much of anywhere else in Europe for that matter. I’m currently trying to put together a deal to pick up a used XS and CD5x to mate with 2C’s. I ran a 5i (non-italic) on the 2C’s once (with a CD3.5) and it sounded great. My only criticism was the lack of low bass response and punch, so I’m not sure if the culprit was the amp or cd player? The 2C’s are a laid-back, polite speaker. I like the excitement and drive that Naim gear produces to wake them up. My space is small (12x12), so I’m figuring the XS, or even 5i-2, would be plenty for normal listening. My family and I travel to Montreal every fall to see the Canadiens play. Next time were up, I’ll have to stop by the local Naim Dealer.