Quick note to say ‘.23’ versions of the Naim App are now available for Apple and Android - as detailed by Richard here:

[Header-App-Update.124741] An update to the Naim App - version 5.23 for iOS devices and 2.23 for Android - will be available from the Apple App Store and Google Play Store from today. It includes a range of fixes and extra features, including a simple new Self-Help tool designed to help Naim users identify and solve networking issues that could be interfering with their enjoyment of music streaming. This new diagnostics tool is simple to run - look for the Question Mark icon in the Rooms sc…

For more on the new self-help tool, see our support guide here:

How to use the new Self-Help Tool? | Naim App | Naim

Poor app/product performance is often due to issues on the network. Using a 3rd party service called RouteThis you can initiate a Naim-specific scan that analyses  your network and provides suggestions for improvements.  An update to the...

Any more insight how does this compare to Ookla speed tests? Here’s my naim results from my iphoneX 10ft away from my 5Ghz router and those of Ookla. Why does Naim’s test report moderate and what does that mean ? When speedtest provides very low ping time, low jitter and 0 packet loss, and 0 buffer for a 4K video signal streaming.

Another question, what PII if any is being sent to this third party service? 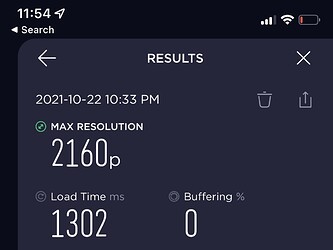 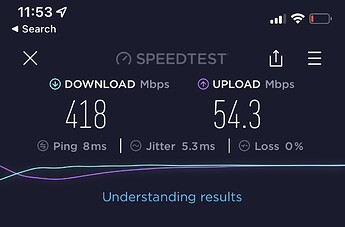 I have no network issues, but thought I’d try this. My NDX2 is connected via a cable to main router, and the app correctly showed the fibre download/upload speed, which is all fine, however the health was Moderate at less than half way in. I’ve no idea what this is referring to. It then said I have three issues:

I had a similar experience. It’s a good idea but at the moment I think it’s a totally useless diagnostic tool.

I gather it’s provided a third party. I hope Naim aren’t wasting too much money on this…

Again, I think the guide would be useful here…

How to use the new Self-Help Tool? | Naim App | Naim

Poor app/product performance is often due to issues on the network. Using a 3rd party service called RouteThis you can initiate a Naim-specific scan that analyses  your network and provides suggestions for improvements.  An update to the...

Thanks Clare. I did read this first, but can’t say it made my experience any more understandable.

I’d be interested to know if anyone here got above Moderate.

The three suggestions don’t seem to be particularly helpful but I guess that is an issue with these sort of automated apps.

Running it again it says I have bad coverage based on 60mbps. Interesting given some of the lower speeds quoted by some forum members.

Perhaps it will be an opportunity for bragging when someone gets whatever is the next level up from Moderate?

Hmm… NDX2 is wired, phone is on 5GHz wifi. I get 230 Mbps down & 30 Mbps up with a rating of Moderate. Ookla returns 280 Mbps down and also 30 Mbps up on the same phone. Not sure about this function either.

That is just internet speed test. The app is testing your internal network configuration. Which WiFi wise can be severely compromised by other factors. Internet bandwidth has zero to do with device discovery which is what the app is trying to help with.

You do realise it’s measuring what your Naim is receiving?

Tnx Claire, I wondered indeed. But why does 230 Mbps rate as moderate?

That is moderate in world where 1Gb connections are becoming more widespread.

Moderate is fine - should be few if any issues, unless other areas of concern are detected.

You do realise it’s measuring what your Naim is receiving?

Ah OK, I wasn’t clear - I assumed it was the device running the app. So if that is the case, what happens in the example Help page where it shows more than one Room on the main screen. When you select “?” there, which would it do

Get it. I kinda expected this ‘rating’ was indicating (potential) issues in the context of streaming audio. As that is the context of the Naim app. Not a speed indication against what’s (becoming) widespread. Or are my in-head streams twisted now?

We’re looking at making the terminology clearer, as it’s obviously confusing people - which is not the aim.

I too had already read the guide that Clare pointed us too, but I read it again. The network speed is internet speed to the phone and nothing to do with the Naim kit. You can easily see this by switching between 2.4 GHz or 5 GHz WiFi. All my kit is wired, but the diagnostics said my network speed was too low on 2.4 and moderate on 5GHz. Of course for any of my streamers the speed they see is nothing to do with my phone.

I still think this tool is of very little real value.

I don’t think the speed is what my NDX sees as I get different answers when I run it in different places.

But my phone is on WiFi so it’s a useful approximation if I sit next to the NDX to run it.

I’d like it to tell me if it’s worth investing in a permanently wired solution and Hifi quality switch. But I guess that’s a bit beyond a free app

Sorry but Ookla’s test is initiated from a wifi device where wifi will also play a role. I understand Ookla’s test is about speedtest from the device initiating it to and from the internet.

As to device discovery, take your pick zeroconf, Bonjour, SSDP all of those consume so little bandwidth are not impacted by low performing WLAN’s. If Naim’s 3rd party network analyzer tool was only checking for device discovery, then surely why indicate internet upload and download speeds ?

According to above, moderate assessment is in relation to top 1Gpbs service, my question wasn’t about device auto discovery: what is that tool doing differently to report lower speed test results than Ookla’s test. Both are measuring internet speed tests, as the upload 50Mbps corresponds to my internet max upload speed.