We will be moving from an old Victorian house to a new build detached house. Typically, when looking at show homes the first thing I’m considering is where my hifi will go and where the sockets are!

Anyone had any similar experiences? The nee living room will have concrete floors which pleases me, but two walls are stud walls and there is a bay window.

The room is rectangular shaped, so I guess the speakers can either go along the long wall or the short. 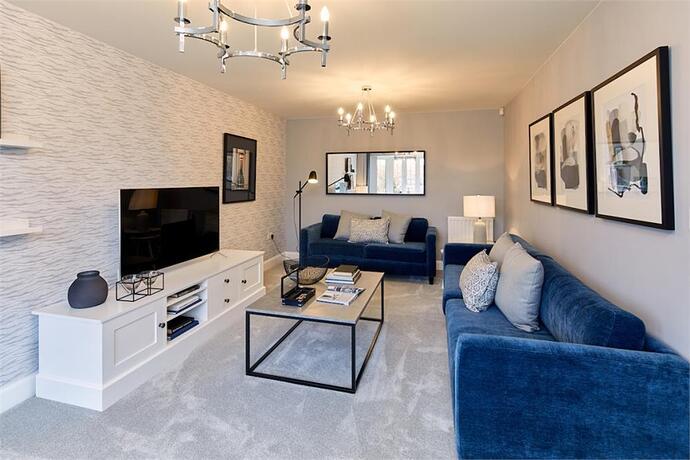 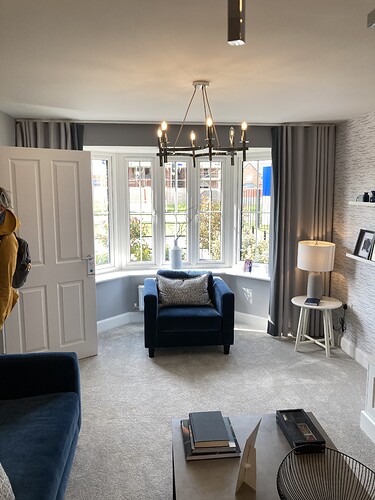 when looking at show homes the first thing I’m considering is where my hifi will go and where the sockets are!

That is my first thought when exploring any new home, whether brand new or just new to me - though I assess on paper first. If room not big enough it is rejected instantly. Sadly a relatively recent (past 20-25 years or so) a common trend in new build has been lounges described as “large” because they have one dimension of at least 20ft - but often only 10ft or so wide, which to me is appalling design. The photo appears to me to be of that ilk, though it is always difficult to tell from a photo - a floorplan is much better.

I’ve noticed many new builds are with a smallish girth but with a very substantial height, with very tall windows from floor to ceiling. Almost Dutch like.
I would imagine a trend in a few years for highend wall mounted speakers taking over today’s thin floorstanders.

Are these pics of the show house room (just to be clear)?

Rectangular rooms are far better than square rooms (see Cardas models). One of the main issues is ceiling heights, with the higher the better, albeit there’s often now better insulation between floors, with concrete joists used instead of just timber and plasterboard/laths.

Of note here is the carpeted floor downstairs (obviously helps with damping a tad), as most new-builds I’ve seen of late have had wood floors over concrete, with underfloor heating, this all sat above solid insulation in the floor. 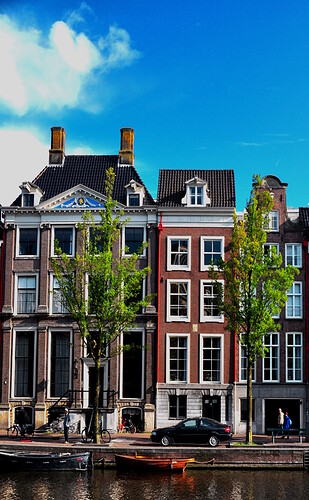 Not my house, but Dutch houses often have length and or height indeed. A perfect business case for SBLs …

Based on the photo it looks like about 4 meters wide which is rather narrow. I think
5m x 7m would be good. Also be nice if it’s not all open since that plays havoc with bass. You may want to look at basements that you can build to suit

I would also think moving from a Victorian house with solid interior walls to a new build with flimsy timber/plaster board construction will also have a bad influence on sound quality and encourage bass boom. Even the exterior construction could be a factor if the new build is single brick layer over a timber frame.

Not sure I understand the question. The dimensions of a room are compromises to live with. If you have a small room, you can just as easily spend $50k on tiny speakers for a tiny room as $50 for large speakers for a large room. So I don’t think the size is necessarily a factor though a small room with too much furniture can render spending a lot on hifi pointless. Though I’ve seen massive rooms with too much furniture keaving no place to allow speakers to perform.

The bigger question about hifi friendly is, as you have alluded, the construction of duviding walls, possibly of windows, and of course the wiring situation. But here, I’d say “It’s a new home! So you can rip crud wiring out or have a wall made more substantial with relative ease. Wan’t LAN ports in every room? No problem. Just do it!”

I take it as a given you can make it as hifi friendly as you like for moderate cost since it’s new and easy to work on. Dedicated mains, wiring, a balanced transformer in the garage etc. Now is the easiest time to do it. The bigger question is less hifi specific: Will my stuff fit? And if so, leave room to swing a cat?

Typically, when looking at show homes the first thing I’m considering is where my hifi will go and where the sockets are!

Anyone had any similar experiences?

Yes, here too. I always look at the floorplan first. Where could the hifi go? Where would the seating be? Bookshelves? Etc.

But also, how it could be changed to fit my/our needs. Sometimes it can be a question of (re) moving a wall or adding one.

Only if that satisfies will I even look at pictures and/or in person.

I have a modern home with similar dimension living room. Ceiling height, which is low in my house is a key issue for me as this defines an annoying bass peak. You can check this in REW sim function and I have found it to be surprisingly accurate.

As a previous poster has said, it’s a compromise, a new house comes with a warranty, well sealed, new windows, new roof, new kitchen, bathrooms, even appliances, the stereo for me is a small factor. The biggest upgrade for my system was moving to a virtually sound proofed detached house.

I think older houses are more hi-fi friendly as they were built more solidly without any real thought to either thermal or noise issues. High celings are a bonus but that’s back to the Victorian era.
I live in a 1930’s house which is unusual in being of solid brick construction, so no cavity insulation. In the past bass boom has been an issue but no longer with the grip of a 500DR power amp.
The hardest part of any hi-fi system to get right is the room interface.

My new build is pretty much the same as OP’s but a bit smaller. I can only fire speakers across the room due to french doors one end and bay the other. I did have to push and pay for extra sockets as only had a double in each corner so had an additional three doubles added for hifi and tv corner.

Construction will more than likely be
Block and beam ground floor, so a big void under the floor before you get to the ground.
Then if you are lucky light weight blocks with dot and dab plaster boards, brick on outside, or getting much more popular, timber frame on the inside instead of block.
All this is great for installation valves but horrible for sound, so many voids that vibration loves.
If you run naim speakers that like the rear wall then they are going to hate it.
You can make it sound good, but work would need to be done

I ruled out a few other new builds because of French doors in the wrong place too.

Good point about the sockets, I will be adding a good few more to the living room and the kitchen.

My PMCs are currently very happy close to the wall so hopefully will give me some more options with speaker location. Always had speakers on the short wall, but will try both walls.

As far as I know the dot and dab walls will be filled with kingspan insulation so that should also help reduce the voids/vibrations.

But also, how it could be changed to fit my/our needs

Yes, I always view houses with that in mind (together with consideration of how readily, and do I want to live with the disruption if I don’t have the luxury of somewhere to live after purchase while waiting). The layout and room proportions of mainstream build houses in the past 2-3 decades very rarely seem well considered to me - and from comments by people I know who’ve bought some of them it seems the lure of being relatively maintenance-free for a couple of decades seems to have been the over-riding factor - then they get into modifying them! The second house I bought (late 1970s) was from new, and was OK including room proportions with a decent size lounge good for the hifi 18’ x 13’6, with the by then standard 8’ ceiling.

That “technique” is a real hate of mine!

It is with me unfortunately some clients want it or situations specify dry lining. I prefer 3 coat solid where possible

I recall someone on another topic suggested creating a slit in the plasterboard high up, and poring in dry sand to fill the void - nice idea I thought, but never heard if it was done or not.