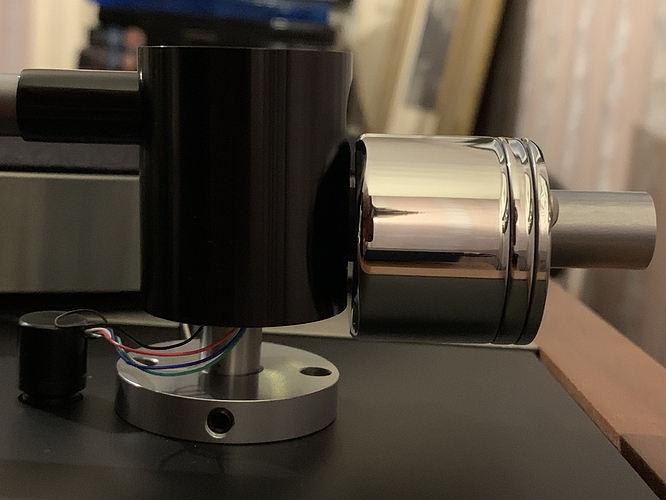 Have you got the O rings centred in their grooves after adjusting it. Rotate the weight back and forth a few times after sliding it, then reset the azimuth. It makes the adjustment a bit of a pain as you end up overshooting back and forth for a while but get it right and there’s improved dynamics from centring them so there’s as much decoupling as possible. There’s still enough grip to hold the azimuth in place.

Why is the bias weight silly?

Yes Yeti. I adjust the weight back and forth until it feels loose. There’s then enough play either way along the arm for about +/- 0.2gr. It then feels a little loose tbh, but that’s the way it is.

One thing that is tricky is adding the weights. The whole Skale isn’t that precisely made and one has to be very careful how they line up. The combined weights as a unit can be moved and can easily allow the metal to touch the arm stub. You have to turn each weight around and tighten up the capscrews to see where the best alignment is. As you’re tightening them up, apply finger pressure on the weights to the ideal position. That is the only tricky part of setting this weight up. The rest is surprisingly easy.

The bias weight decision is not easy. I don’t like the idea of an arm hanging freely from the cup without damping. Just imagine if you designed the arm from scratch. Would you finish the perfect design, then add a freely vibrating protruding arm for sound reasons. There are benefits for keeping the weight on and benefits for removing it. Which is best?

One day I’ll make a finger lift and compare it to the standard one.

I think it makes for a great adjustment device as you can actually tweak it in a way that produces different anti-skating forces throughout the record, increasing towards the inner part of it when it’s most needed vs. having to settle on an average.

Think there’s a misunderstanding with which weight is which. I’m (and I presume Japtimscarlet) talking about the the small balance weight which adjusts the azimuth and not the bias weight on the end of fishing line and hanger.

Perhaps - I was referring to the bias weight, which is the one that was called “silly”.

It is however a bit strange as the Skale doesn’t get rid of that, but rather of the azimuth weight (as pointed out elsewhere on the thread) so not sure why it’s a point of discussion for this one.

Count d is correct of course
I was referring to the azimuth weight… which is redundant when using a “turnable” off center counter weight…it’s too heavy as standard anyway and yes “silly”
The anti skate weight is not removable as it’s still needed
Though it is tweekable in the well documented way by moving the wire hanger out to line up with the 5th ring …and increasing the weight to 1.25 gms or so …