One thing I have noticed with my Aro, across several cartridges and many years, is that it always tends to prefer a slightly heavier setting than the cartridge manufacturers recommends.

IIRC Malcom Steward found the same thing with his Troika when he got the ARO.

Hi Richard, do you know the original angle of the bias hanger? My one is completely vertical and the weight is hanging about 3 mm away from the hanger length, which I somehow think is not how it was designed. The eye of the hanger is almost smack on level with counter weight arm though.

I don’t I’m afraid, and looking at the general assembly drawings hasn’t helped either. It likely is quite close to the bar as when the arm is at the fullest pivot at the end of a side you don’t want the weight catching on the hanger loop.

Mat, here is a pic of my hanger. Looking at the I link I see yours must be a little differently setup. Would it be possible for you show a pic of yours? My cart is a lyra helicon sl, Layra recommend 1.6 to 1.75 grams using the scale that came with the Aro and Naim say 19Nm for 1.7 grams, after some advice from this forum I may try 2 Nm.
Sorry just looked at yours in the link. Hmmm

not for me I’m afraid.
Ok so I’m confident it’s about how it was when It left the factory. Looking at 334478 Aro his looks the same, also when I have the weight hanging off the far end of the bar and the cart is sitting on the very inside grove next to the label of a Lp I have about 2mm to go before the weight touches the hanger as Richard suggest if it touch that would be bad. Not saying what you have got is wrong at all, just me and my ocd and everything in it right place. 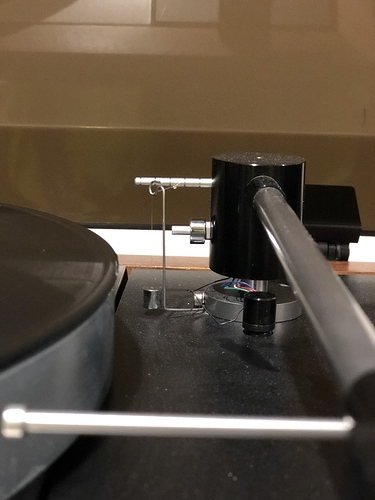 Here is a link to a very good site. Just found it on my phono from years ago, may of got it from this very forum. The top directory goes into a much larger directory with a lot of name gear including the Aro now I’m satisfied😄I forgo I had it. Kuma must be behind it I guess. Thank you 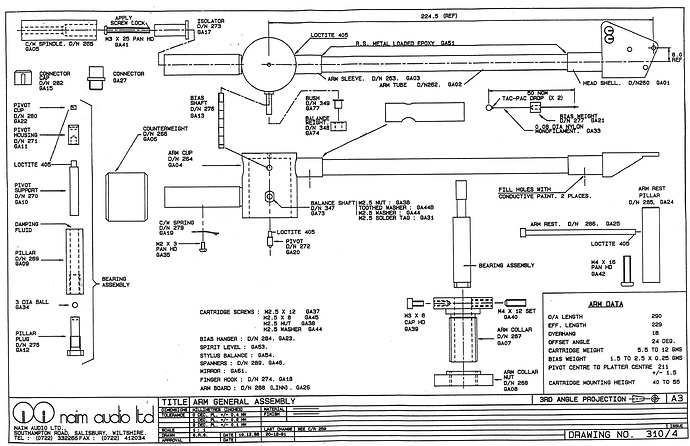 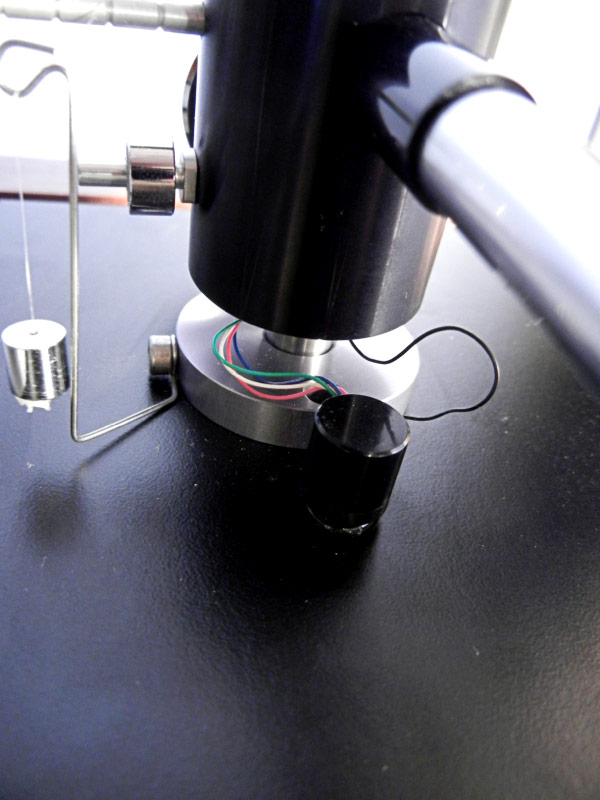 Hi, sorry, not sure I understand what it is you want me to do?

shouldn’t the wires be dressed to the right?

As suggested above, using a blank disc will give an incorrect indication of the required bias. The reason being that the the stylus is literally cutting a slight groove in to the disk which creates friction far in excess of what the stylus would normally experience when playing a regular groove. The amount of bias required is partly a function of the amount of friction.

100% correct. This is known as a stable balance style tone arm. I set my VTF with a standard weight LP as opposed to a 180 g record. Seems to work. The swing in weight is about .08g.

As yeti says the wires should be dressed to the right. Gently pull them to the right side when you set the arm base on the pillar. Use a pencil with an eraser and set the eraser on the arm collar to hold the wires off to the side, and gently press the male arm wire plug into the arm board. The pencil helps create that loop and keep the wires on the right side.

This may also cause the Aro to change the azimuth angle, so you may need to readjust the azimuth and the VTF. As you see my azimuth weight is further out on the post than yours, cartridge brand also affects this.

I have my hangar bent so that when my arm is in the the resting position the anti skate weight rests on the arm board and doesn’t always hang. Either way is fine, just providing info. 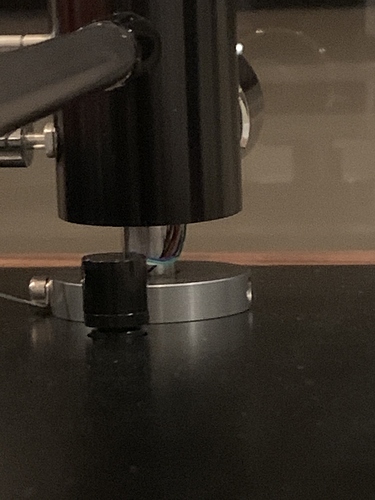 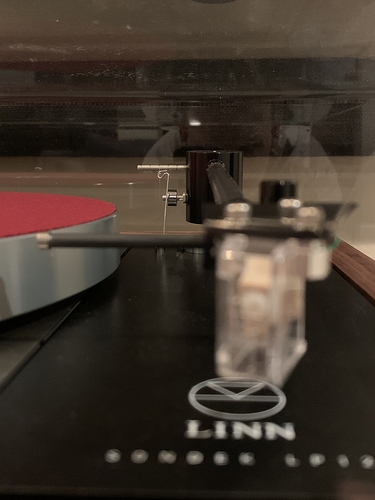 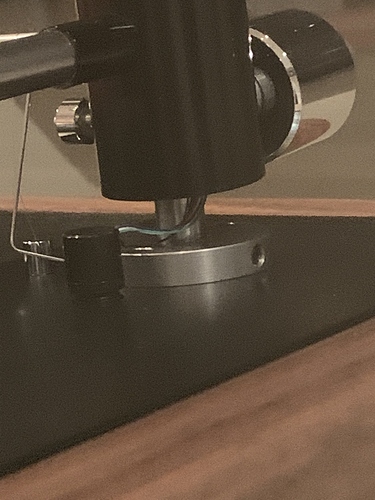 Hi mat, sorry to confuse you. As I was asking the question for you to post a pic I checked the link and realised you already had posted some pics.
Cheers

I’m not sure, I guess that’s how they have always been on that/my aro. Seems to sit natural that way. They aren’t touching the cup. But If that’s what you recommend I’ll give it go?
I fetal the black wire away from the bunch as it’s longer, I see some folk look like they move it to the right. Any suggestions gratefully appreciated thank you for your knowledge.

Ok awesome! just read your post last will do straight away!
Thank you guys, will report.

Hi Scott, I have managed to get them to the right side. I almost got myself in trouble as I found the the wires enter through the front of the cup so I decide to try and loop them around the back of the pillar so they came from the right, this was a bad idea as the male plug almost reached but not really, gently does it all the way though. I ended up putting the longer back wire around that way and just moved the main set of wires to the right. My Aro has a very old serial number 55898 maybe around the first year of production? I’m not sure if they made any changers over the production, Naim being Naim I’m sure they may of as improvement after improvements is what they are about, anyway it’s sounding goosebumps right now so thank you for you help and all the other that have spent time on me and my problems.
My next problem will be the azimuth, I did have a little level (brought off flea bay) for the head shell but found it not to be very sensitive and since have lost it. Most of the “bits” that came with the Aro have been long since lost so I guess it will by ear. 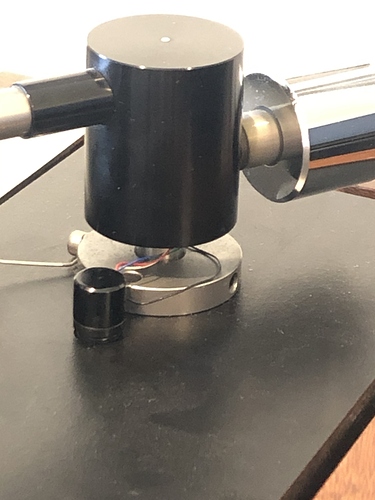 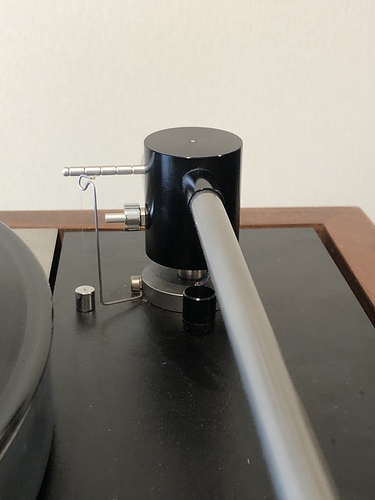 The level that came with the Aro was used on the cup and was very sensitive. Mine wasn’t level but I marked the high point and rotated it so the error could be ignored. There are those that will tell you to look at the stylus resting on a mirror when setting azimuth, one came with the Aro too, but I used a DV17D3 for a long time after I got the Aro and could never see it well enough. Since then USB scopes have become cheap and common but I’ve never tried one. I found the level on the cup correlated well with what I heard. There are online suppliers of spirit levels of various sensitivities, I don’t mean on Ebay.
When playing with VTA, you can place a business card against the pillar, bending it slightly so it touches the cap, and mark it at that level before making a change, this helps you to come back to where you were before. I’ve used a 17D3, Transfiguration Proteus and a Decca Maroon on my Aro and I think all benefitted from having the arm very slightly down at the back, even the Maroon with its spherical stylus. When tightening the grub screw securing the pillar, don’t, only tighten enough to just keep it in place. Forget Linn tight and Rega rigidity.

Just follow Mark’s advice, all will then be good!

No pics from me in that thread!