Anyone care to help with an artist sorting dilemma?
Context: I ignore ‘The’ in my sorting preferences - The Beatles appear under B.
What about The War On Drugs? I get the impression this is a phrase rather than The Something.
Do you sort it under T or W?

Best of luck with The The

iTunes would show it as “The Beatles” but would be seen under B, which I think is very clever. Its a pity the Naim App doesn’t give that option for Local Music

I also use the option of ignoring the prefix ‘The’ in Asset, so The War On Drugs is sorted under ‘W’.

It really doesn’t matter so long as you can find them. Asset for example cannot differentiate between a simple The, as in The Damned, and a The as in The War On Drugs.

I would sort it into T because I think that the The should only be ignored if it’s an article to a band name in the form of The Beatles, and as you say in this case it’s more like a phrase that was appropriated in its entirety.

I frequently have similar dilemmas. In German equivalents, the German band Die Türen clearly goes under T because it follows the The Beatles mold.

However, the US bands Die Kreuzen and Das Damen are questionable because they use German words with incorrect grammar in ways that make little to no sense, but at the same time Die and Das are proper articles in German and the names do follow the The Beatles mold, just twice removed.

In the end I put them under D, choosing to interpret them as a phrase. It’s just important to follow a consistent pattern

You’re missing a few in the the the catalogue. 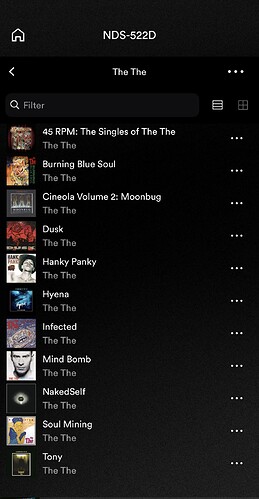 It really doesn’t matter so long as you can find them. Asset for example cannot differentiate between a simple The, as in The Damned, and a The as in The War On Drugs.

But it can, because you can set the Album Artst Sort tag.

Can’t you set the relevant sort tags for these files? Surely you can.

For consistency with all my other ‘The’ albums, this will come under W.

Good point, but haven’t done that. May be an option, but I don’t want to go through and change all my CD’s, as it isn’t a big enough issue. Mostly these days I just go to Favourite Artists