The Gigabyte Brix that I have been using as a music server has died, so I got a new mini PC to replace it. I have installed Asset UPNP, which I was using on the old PC - but there is a difference that I can’t figure out at the moment.
Previously, in the Naim app, I could select UPNP, select Asset (and this is still the case), and one of the options IIRC was Advanced and in there I could select Folders & Filename Browsing, from which I could select my main Music folder. That’s what I always used for selecting and playing music.
Now the is an Additional option, and that has Folders & Filename Browsing. However, now there are two folders called Music (on the PC there is the Music folder that Windows 10 sets up for the user, and I have a Music folder on a largish SSD, where the music actually is). However, whichever I select I find no music titles at all. I get [All Folders & Filename Browsings], and if I select that then all I get is Playlists, but no music. The same happens for the other Music folder.
I can’t figure out what I have done differently with this installation.
Any clues, please?

I suspect you haven’t told Asset where to look. It’s in the configuration. 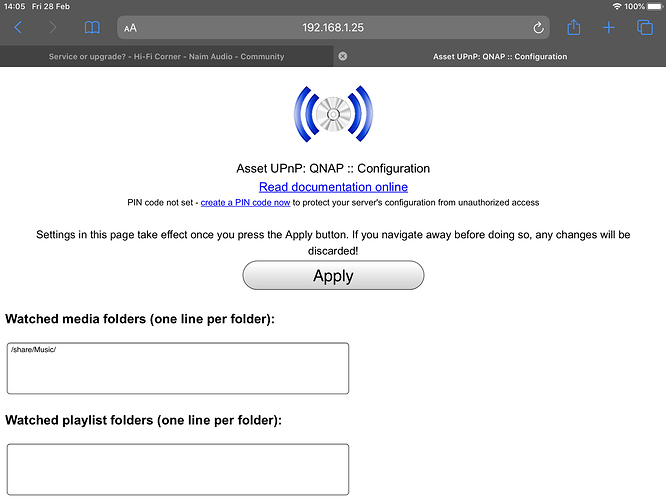 I don’t recognise that screen - but it does have a library of the appropriate music - if I go into Albums or Composer or whatever I can see the music.
However, I noticed that this wasn’t the registered version, so I have registered it and now it is a little more like it was - I can see the music folders etc in the Music folder. It’s slightly different, in that it used to show all the folders first then individual tracks that are in the root folder. Now it starts with header icons - starting with an asterisk then with each letter of the alphabet then [0-9]. If I select that, then I get something like I used to have - all the folders, then all the individual tracks.
Most odd. So now a few more clicks to get to where I want, but I can get there.

Yes - that’s OK, but what I like about using the folder view is that I don’t have to think of particular music to listen to - I browse through what’s there and play what I fancy, IYSWIM. More serendipitous, I suppose.

100% agree with HH, I search primarily with Album Artist/Album for rock/folk/jazz & Composer for classical.
I do use File & Folder view sometimes, mainly because I know my NAS folder tree so well, but since I moved to Asset it gets less & less.
I also like Asset with a simpler/less browsing options
This is my current config. 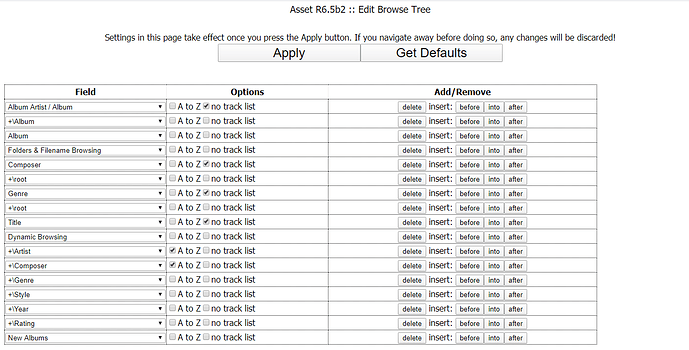 That’s got me thinking. When I started with streaming about eight years ago had relatively few classical albums and didn’t bother with the composer field. Now I’ve got loads. The way I get round it is to add their name to the beginning of the album title, which can be clunky. Maybe I should look into it.

Yes - it’s a new PC, with the old boot drive simply as an ordinary drive on the the PC. New installation of Asset.