This is exactly why servers should be well away from the audio. Mine lives in the garage, it can drum away like phil collins in there for all i care.

I am surprised that you didn’t get a response from the Qnap forums or a response from Qnap themselves when you opened a call. I have found both the community and Qnap support very prompt to respond. I would try again.
With a cctv system running 24/7 I don’t worry about such things.

Fingers crossed…I seem to be in the queue for customer service.

Bart…how did you get on, interested in the outcome?

Bart…how did you get on, interested in the outcome?

qnap customer service have been taking logs. The standard level support guy couldn’t figure out why there was so much activity, so he escalated. I should hear something tomorrow I hope. At least they are on the case.

I bought ssd’s, but am afraid to install them because if they are this active too they’ll just ‘burn up.’ The activity isn’t “normal.”

Follow up. Well I dont know exactly why but my nas IS now going into standby. I’ve yet to learn if qnap support changed anything for me. (I’ve given them remote access a few times, but I think they’ve only taken logs from diagnostics they had me run.) I did turn off everything they told me to turn off.

All I really need to run on it is Hybrid Backup (so I can connect it directly to my Roon NUC to move files to the NUC, and to Dropbox). Those are running and its going into Standby…so…At least it’s now working as intended. I may never know what the issue was. Must have been something they had me turn off.

Good to hear you’ve sorted it out Bart. But after reading through all this, I’m glad I have my no-brainer Uniti Core backed-up with a simple portable HHD!

There are a lot of things a nas can do, including teaching you a bit about how this ‘stuff’ all works. My Roon NUC doesn’t have a music library backup feature, so the nas can “pull” the files over to back them up, as the NUC cannot push them.

Something Roon needs to add really.

Something Roon needs to add really.

That’s for sure! Can’t REALLY treat the NUC as the library of record if it won’t push backups.

It pushes a backup of its database, but not the music library itself.

It pushes a backup of its database, but not the music library itself.

Exactly. You choose your backup system, such as Backburner for cloud backups, and it does it for you.

I can mount the Nucleus on my nas and transfer files using File Manager on the nas, but I can’t seem to mount the nas in Roon on the Nucleaus to push the backup to it. So I’m pushing the Roon backup to Dropbox.

You can mount the Roon storage and set up an automatic backup using hybrid sync no need to use file manager. Then back that up to cloud it’s how I do it.

You can mount the Roon storage and set up an automatic backup using hybrid sync no need to use file manager. Then back that up to cloud it’s how I do it.

I’m trying to mount the Nuc to the nas with Hybrid Mount – there is a HBS 3 Hybrid Backup Sync app – is the latter what I want?

Would you mind telling me the settings you use?

I set this up before the latest but it still works. 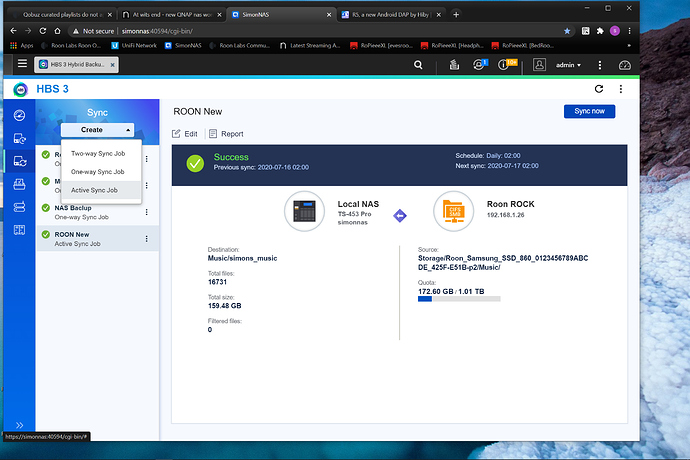 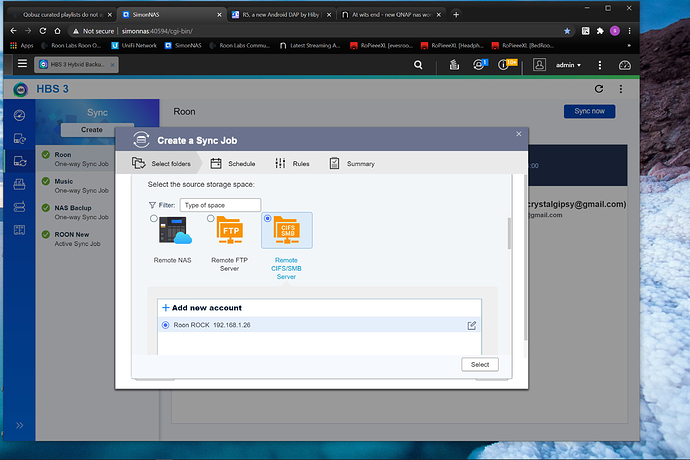 add acount how you access the ROCK you can use guest and guest as user and pswd. 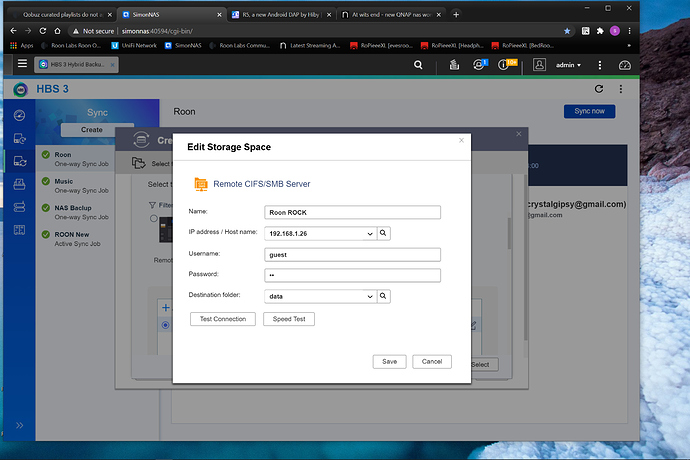 Then create the sync folders 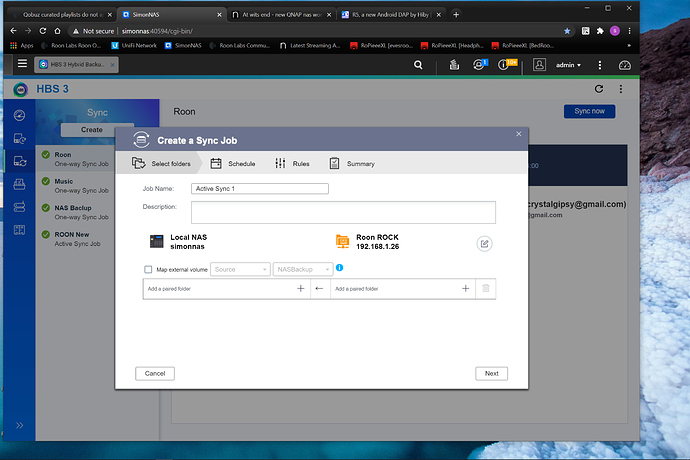 set your schedule and other parameterr as you want them.

THANK YOU I really appreciate it! I’ll give it a shot. I was starting with a ‘one way’ not ‘active’ job…so this likely will set me straight

No worries. Hope it helps.

Success on the synching was short lived; after 1 synch it now throws errors each time, even when I delete the job and try to set up a new one.

So instead I’m using a synch app on my Mac (Sync Folders Pro) which, given the few changes I make, is working just fine for the task.

But the hdd churning still has not returned