Just browsing around on my network earlier and noticed my router was reporting 2 MAC addresses for my Atom. Presumably one each for cable and WiFi.
I find this unusual in a unit of this type. Every piece of consumer entertainment equipment I have ever come across uses the same address for both cable and WiFi.
Am I that far behind with technology or are Naim an exception? 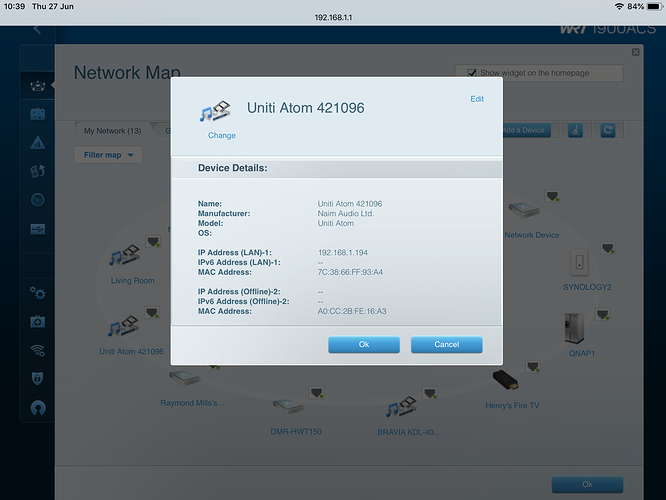 It’s absolute standard, that each “physical interface” has an own, world-wide unique MAC address. And Wired and WiFi classify as “2 different interfaces”.

None of my other entertainment electronics which includes Xbox, Apple TV, DVD player and HDD recorder, plus others, has 2 separate addresses.
Maybe they use ‘logical’ rather than ‘physical’ addressing but only 1 shows up on my router network map.

The MAC addresses will be assigned to the hardware implementing the network connection, hence 1 for ethernet and a different one for wi-fi. This is normal.

Where the xxxxxx is the serial number.

You should see the MAC address for the current connection, switch from ethernet to wifi or vice versa and I suspect the MAC Address will change.

I think there is some confusion. Lets take my any of my other media eqpt as an example. If I use a cable connection I am using address 12:34:56:78:9A:BC and if I use wifi connection I am using address 12:34:56:78:9A:BC.
2 separate interfaces using the same address.
There has to be some logical switching going on in there.
On the Atom I get 2 different addresses depending on connection type, as per photo.

I was going to edit my last post but it timed out so I will continue here.
While it has been perfectly possible for a long time to have cable and wifi share a mac address my question asks why, in the context of consumer home entertainment, has Naim decided provide 2 ‘physical’ interfaces, each requiring their own mac address.

We have two unique mac addresses so:

Ultimately we want to be a good network citizen and having a common mac for both interfaces is a bit messy, One NIC, one MAC. We have two NIC’s so two MAC’s.

Nice to see that the inner tech improvements of the new products are slowly being spotted.

Thanks Steve for a good explanation and the reasons for Naim’s decision to do what they have.

Sorry I have several audio devices, computers and TV boxes, they all have separate mac address for wireless and wired. Nothing wrong with this pretty standard practice if you ask me.

Well, I guess most of my other stuff is a little out of date.
The newest ‘other’ is about 12 months old which is as I described earlier. The only thing I have with 2 mac addresses is the Atom.
If separate mac addresses are the way things are going these days then I’m all for it.
But until my other stuff goes pop, I’ll live with it.