Is it a good one?

Installed on NDX2. All seems good. Sound is very good - can’t tell for sure whether there is any change as I’m not listening to familiar music. Obviously no major change but there may be an improvement.

I don’t get why the “hence” in these sentences

Well, onwards hasn’t always been upwards in that regard!

Yeah but you seemed to say the last update sorted some glitches and sounded better, what’s not to like?

Anyway, you’ll never know if you personally uncover a glitch that nobody else encountered, unless you try. If unsure, wait a few days and see if people start complaining.

I can only say that I ran the beta versions on the NDX2 and all was fine, but I’m using only Roon so can’t say anything about odd characters not working with the Naim app and the other fixes. Obviously nobody else encountered any critical issues during testing or it would not have been released, but again this can’t be proof that you won’t …

Atom is updated must say I’m glad the power button doesn’t get that bright normally lol.

It’s a minor patch update to sort some issues rather than a major update. These aren’t always posted up.

Just be sure you are running at least version 2.24 (Android devices) or 5.24 (Apple iOS devices.)

Applied to my Star but it hasn’t fixed the annoying CD loading/ejecting noises when the unit is turned on which were introduced to my Star with the last update. Hopefully will be fixed with the next major update…

Hi @IanRuneckles, what noise are you experiencing exactly.

With my Star there is short noise from the CD drive when the unit is powered up. But this has been there for the over 2 years I have had my Star (including the last two firmware versions). When the unit is switched on from standby this does not happen for me. But I do have a USB drive connected and the Star set to servermode so it does not switch off the transformer in standby.

In short: The new firmware has not introduced any new behaviour in the CD drive on my Star. So you are experiencing more than this it may be a good idea to contact your dealer or customer support just to confirm that it is not a hardware thing.

It’s not like there’s a button to push when you get the update notification detailing what’s covered in the update. Because that would be weird

Do you ever connect hardwire to play Apple Hi-res? We’ve discussed that at lenght.

This morning my playback was pausing. After it continued for a few minutes (I’d been busy in the other room) I just disconnected my router, unplugged the Nova and did a hard re-set. When done I saw the update and downloaded it.

I love them…it’s always fun to check out the sound afterward. Sure I tell myself it’s better! Lol…

No I have considered getting a cheap second hand ipad and figuring out how to connect it to my atom as I wouldn’t want to have to leave my phone near it just to get music. But i’m also considering doing a free trial of tidal and qobuz (since i’ve heard there is serious work going into a qobuz connect type solution). Airplay quality is seems pretty good for now.

It occurs when coming out of standby to fully powered on, whether there’s a disc in the slot or not or whatever mode/input the Star is set for. It sounds bit like “uh er” and sometimes repeats. Occasionally if there’s a disc in there it will eject. I have the CD set to autoplay but have experimented with it set to choose play or rip, no difference. It only started after the last major firmware update in December last year, I reported it on a thread in the community and Clare Newsome noted it.

I have Qobuz and Apple Music. I prefer Apple for ease and when wired it’s fantastic. As good at least as Qobuz, which is great quality. I’m looking forward to Apple making Airplay Hi-res capable. When they do I’ll drop Qobuz.

To connect you need an Apple adapter and something to convert the signal. I use. Topping D10 and the Apple VGA adapter. That allows you to connect to a charger also. But lets hope they make that change with airplay soon. But actually, AirPlay as is is very good. 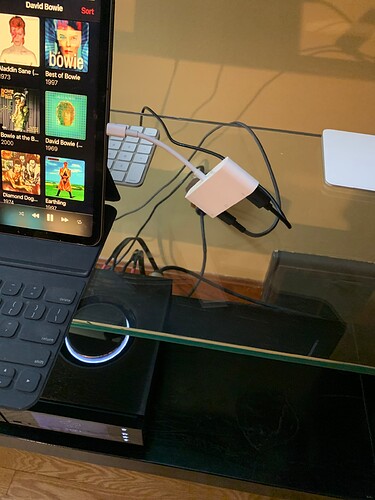 Also note: I could use my Mac Mini but the Mac OS doesn’t automatically match the bit rate to the selection. You select the bit rate in settings, so if you are set to 44.1 and play a 96 the Topping still displays the Mac setting of 44.1 unless you manually change it. That needs to be addressed by Apple.

I’m glad that someone else has also said that airplay is actually quite good. I’ve played with qobuz a few times and you really have to listen carefully to hear any difference, and that’s only on hi res stuff. The greater ease of using Apple Music has always made me drop other streaming services in favour of apple. I just can’t seem to get the hang of organising music and playlists as well as I can on apple. It also has pretty much everything I search for.

And lyrics to boot. Also, with AM you can have Siri play a mix of your music, or a mix of a genre, or play a selection and turn on autoplay. Really easy and it doesn’t drop out. I play Radio Paradise or whatever and it eventually drops. Connection or station or whatever…AM never stops.