Atom on its way!

After many months of research I have ordered an Atom! I have read all there is to read on these forums and elsewhere, but constantly tight finances have delayed me… until now!

I will primarily be using Qobuz as the source for music, but the Atom will also be used for TV/Xbox and Apple TV audio.

Once I upgrade my TV (to one that has HDMI ARC), I will be using the HDMI ARC to connect to the Atom. However, at the moment I will need to connect the TV to the Atom via optical.

Question 1: I am guessing a standard £10 (ish) cable from Amazon will be fine for this purpose, right?

At some point in the near future I will upgrade my speakers. I am looking for floorstanders in the £2000 bracket (that is actual cost, there are deals around that have RRPs higher than this).

I have auditioned the Kef R7 speakers, which were great. I have also (some time ago) auditioned Dynaudio Excite speakers, can’t remember if they were the X34 or X38 versions though. They too were great, but I believe discontinued, which leads me to…

Question 2: What other speakers should be on my shortlist?

Having been a lurker on these forums for ages, I am excited to soon be part of the family!

Thanks in advance for your wisdom

Hi Mark, hope you enjoy your Atom. I’ve been very happy with mine.
I don’t think you need to spend loads on an optical cable. What I have found is that there seems to be some variability between plugs and sockets, so if you get one that’s a loose fit, return it and try a different one.
HDMI is better to use, but there can be reliability problems with some TVs, so best to be aware of this, and keep the optical cable to hand, just in case.
I would recommend trying as many different speakers as you can, as apart from matching your amp and personal tastes, the way they interact with your room can have a huge effect on the sound. Budget for some decent speaker cable too. Good luck.

If you plan to switch to HDMI, then there isn’t indeed any point in spending a lot on an optical cable. I bought an optical cable from QED for about £40, if my recollection is correct. Probably, a cheaper cable would have done the job too, but I thought the QED looked well-built and therefore worth it. Possibly a bit irrational…

Since my technical knowledge is rather low, @ChrisSU, what makes HDMI superior to optical?

Thanks for the info… I will try and demo a decent number of speakers, but I know I will be impatient to pair the Atom with something significantly better than my current speakers!

I know that Naim and Focal have the same French owners, but have heard from a couple of dealers that they don’t pair that well with the Naim Uniti range. Not sure if this is true or not…

There are a number of Uniti/Focal bundles around that offer quite a saving, but the dealers that sell them are the ones that have told me they don’t pair well. Of course, they may have commercial reasons for pushing customers towards other options…

I am guessing it is the ability of HDMI to automate the switching of inputs (to HDMI) on the Atom, but I might be wrong… would be interested in any answers on this!

Yes, HDMI has some “remote control” features. (Also for volume adjustment.)
Sound wise, it should be the same. (With potential differences according to electronics inside the Atom receiving the signal. But it’s the same bitstream transported via either connection.)

I don’t think it sounds better (in my limited experience of using it from TV to Atom.) It’s just that the TV remote can, when it works properly, automatically wake the Atom, tell it to switch to the HDMI input, and respond to the TV remote volume control.

Where the new models of Apple TV is concerned it only has an HDMI output, I bought an adapter from Amazon that sends on the HDMI signal as well as relaying an optical signal.

The older models have both an HDMI and an optical

I will check out the Neats… I have read good reviews of them, (I think AV Forums used Neats in their review of the Atom, might be a higher end model though, can’t remember).

Thanks for the suggestions!

Yes, I have the latest (4K) version of Apple TV. I will just use the TVs optical out, which will take the sound to the Atom from all of the TVs HDMI inputs (Xbox, Humax recorder, Wii and Apple TV).

This should work, right?

Set the TV output to PCM stereo and it should be fine.

I would think so, my TV did not have an optical out so I bought an adapter

Speakers: I paired my Atom with Fyne F500 (standmount, due to space limitations in my current listening room) but they have floorstanders worth looking into too. (Very satisfied with the F500s, BTW.)

Thanks for the explanation @PhilippVH and @ChrisSU — have learned something today.

I of late have been very disappointed with my.

The choras are 826 and I heard them recently and thought they were great too, in fact at a Naim show late last year I though they stole the show

I will be replacing a classic NAIT 2 integrated amp with the Atom and have the old Naim speaker cable, connected to the NAIT as shown in attached pic. These connectors will work with the Atom, right? 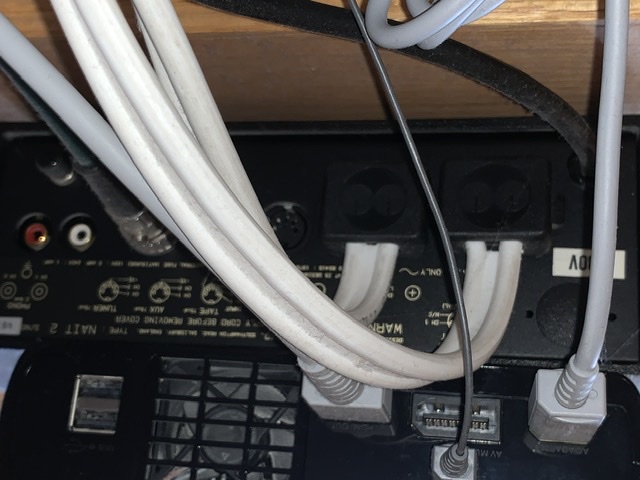 Apologies for upside down pic!