Personally I’m still investigating a dedicated mains, but one of these might be a fallback option if that isnt possible

A separate mains spur might not necessarily remove the DC problem, and certainly wouldn’t if it is on the incoming mains supply.

If you have a DC offset on your mains then I’m not sure a dedicated spur would help. The issue is an offset between neutral and earth and that’s probably endemic in the mains for the whole house. I had it in my last house, ISTR it was about 2V and I only found out when one day I stripped a neutral wire whilst touching earth… I could feel it! The house before that, I never measured it but I never sensed it so I’m assuming it wasn’t present, or very small. Anyway I fitted a Supra DC blocker… I’ll be honest I couldn’t hear any music improvement though, perhaps, there was a slight drop in transformer hum on my SN2.

I wonder if a worthwhile test would be to measure the offset of your house earth wrt the earth in the ground outside (earth rod driven into damp soil). If there’s an offset there then does that mean the problem is the earth for your house is rubbish? I don’t know.

I’ve not measured the offset (neutral to earth) at our new house but, interestingly there is actually an incoming earth wire from the overhead mains feed… I assume that feeds back to the primary drop feed. If so then I assume there would be a much lower DC/Earth offset.

Or am I being simplistic here? Perhaps someone can explain better?

Actually now I think back that offset might have been 0.2V not 2V. 2V does sound a lot!

This so called DC is not actually DC at all, its a distortion in the AC wave form, in very simple language it’s a shift or difference between one half (180 degrees) of the sine wave compared to the other. It causes current flow in that instance to behave like DC in an inductive load.
Its on L (live) only, it has no relation to N or E.

If its present on the local supply, a separate (dedicated) radial will not help.
If it’s from something in your property, normally something with half wave rectification used for speed or heat control, a separate radial might help.

If you do have a voltage difference between N & E, its normal to have low single number volts & its caused by the circuit resistance difference between the two circuits back to their common point.
If you have concerns, consult a qualified Part P approved electrician.

suggested it might just be the next big thing!!!

DC blockers have a role to play if you have DC on the mains, most commonly manifesting itself as a buzz, often variable from time to time, coming direct from torroidal mains transformers in amplifier power supplies (not from the speakers). DC blocking is the normal way to stop that if someone can’t identify and resolve the cause of the DC, which often though not always is local within the home. Whilst the buzzing can be an annoyance, especially during quiet music passages or if the amp is kept powered when not playing music, I’ve never come across anyone saying the DC affects the quality of sound through the system.

Oh now that’s interesting because it’s not what I’ve read on some other sites elsewhere however what you say does make a lot more sense.

In your explanation then would an isolation transformer help ‘clean’ things up?

Thanks to you both, I’m sure you have probably already read the many reasons I have collected into this humming topic in the attached thread. In my case, the primary reason for looking at dedicated mains is for SQ, as everyone seems to agree it’s one of the cheapest upgrades. My HiFi is currently on the same Ring Main as my Kitchen, which is not ideal. If it does also resolve or help reduce humming then it’s a bonus, and might prevent the need for an additional box.

In terms of DC offset, I understand that the only reliable way to measure DC offset is with an oscilloscope. I have done the N-E test out of interest and read 0-0.002V DC, ~0.03V AC, but as said not sure how relevant that is. I do feel it’s about time someone build a DC Offset plug-in meter. I’m sure all the HiFi shops would buy one, then loan it out, and the result would be potentially more sales of DC Offset devices. Or perhaps companies like IsoTek/AudioLab/iFi could lend them to their suppliers to help boost sales. 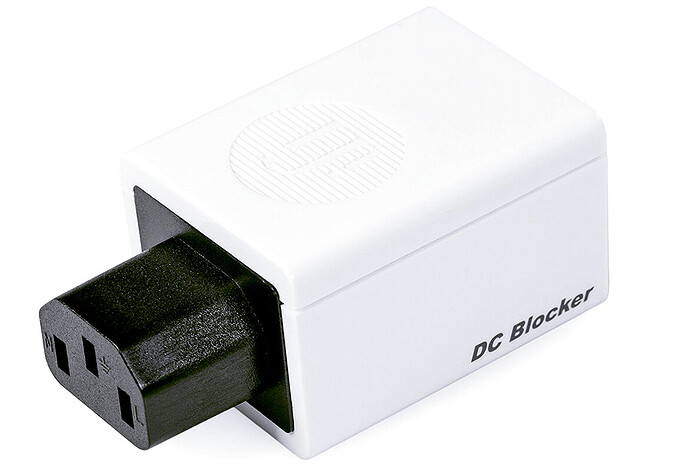 YES - assuming you mean a balanced transformer such as Airlink

Basically YES - if the one half of the sine wave is different in voltage or timing as a whole or in part.

Yes exactly that BUT this is where I get confused because I asked Airlink this question and they said no… hence why I purchased the Supra product.

Saying this though, I’ve searched my emails and I can find the email where I asked them the question but not their email reply

A balanced isolation transformer will correct wave form distortion on its output, but it will not fix the source of the distortion & might become the noisy transformer in the room. So it depends on where its located.
Also we can never forget, transformers can be naturally noisy.
My SN & NAT are both quiet enough to live with hummers despite having a ‘DC’ Offset filter.
The noise went down a few months ago with the power supply voltage was reduced from a high 248-252vAC to (measured to date) 238-240vAC

If you have the space, then from what I have read, an AC generator would trump the Balanced Power supply, but have never tried either. The generators are much more expensive. But again I would say if only we had some sort of meter that you plug in to help determine what state your mains is in.

Interesting the latest Signals newsletter mentions this as a good tweak on moderate priced amplifiers etc and as mentioned many are selling with a money back offer if not happy, so pretty good potential tweak for £99.

I’ve bought one of these - it’s sitting on my monitor “running in” before it goes near the hifi stuff. I’m sure the picture is rather sharper with the blocker in place than without. Can’t think why that would be though. Expectational bias ?

The downside of the Audiolab is that the output socket is IEC female so you need to either use the supplied cable or make up one with one of what appears to be only two types available, neither looking anything other than budget in their construction.

I used a Isotek EVO3 Syncro Uni with the SN3. Although it did not eliminate the slight transformer hum, it did improve the sound quality.