I finally got Audirvana working on my old laptop and iPad.

It sounds quite different and in many ways better - I just stream Tidal.

I suppose this is because it transcodes Flac to wav?

Are these glitches common? Can they be solved?

My laptop only has 4MB RAM. Audirvana recommend 8MB, but say that 4MB should work. Is that the problem?

Should I get a Mac Mini or other headless computer to run it?

If so, which ones are good?

My laptop can’t remain on and open 24 hours, and it’s extremely Electrically noisy. Plus its HDD makes an audible whirring sound.
Thanks
Jim

It could literally be 101 different things. Have you turned on task manager to watch what the CPU and memory are doing during these dropouts? Ditto for the network, especially if wifi.

4GiB seems okay to me. Mine manages fine and handles 4K video streaming. You might have other services in the background interfering too.

My opinion is that you are just asking for issues running it on minimal resources. In theory it should work, but reality is sometimes different.

There are literally dozens of assorted Microsoft slushware programs running in the background - most of which I either haven’t heard of or never use.

The ones that seemed certainly non-essential for running the PC I switched off, but that was only 3 or 4 things out of about 50.

So it could well be all the stuff Microsoft uses to bung up PCs to force us to buy new PCs that’s eating most of the processing power.

The 8GiB recommendation is extremely conservative. My box with 4GIB always has 1.5 GiB free. Audirvana uses up maybe a few hundred MiB at most. If you turn off unnecessary services and remove software you don’t use, memory limits are unlike to be an issue.

How old is it?

So it’s probably spewing electrical noise directly into my router…

I use a new, but low ish spec Lenovo mini PC. Out of the box it was a bit clunky but I turned off all Windows features I don’t need, Uninstalled nearly everything, and turned off services that aren’t essential. Purring like a kitten (well not literally, it’s fanless).

I’ve had more Asus stuff than I can remember and they’ve also been fantastic. I’d definitely look at the isdue in a bit of detail. Of course if you are short on patience and have the money, buying a new device will probably fix the issue too. I’ve certainly had other non computer related issue where I thought “my time and blood pressure are more valuable” and happily thrown money at the problem to make it go away. No judgement.

So does your mini PC have a screen - or just a CPU?

Having my old full size laptop on the floor in the sitting room is not ideal.

And if I shut the lid/screen it switches off, so it would have to be open all the time…

No. It is a ThinkCentre m75n. Once setup, the monitor and keyboard are no longer required. It goes on the rack. 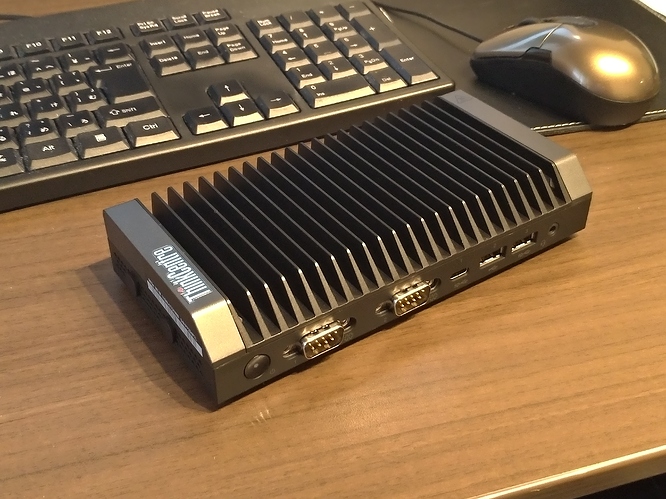 thrown money at the problem to make it go away.

I’m only thinking of perhaps throwing £200 to get a headless several year old Mac Mini - as I’ve heard they are electrically less noisy than most PCs, so should give better SQ (?) - and it would be less obtrusive.

I know a lot of computer audiophiles use them as stores/servers.

Probably. Mine was a premium because I went fanless to avoid mechanical noise and also to avoid a motor introducing other eluctrical noise.

I take it you’re using Audirvana as a DNLA/UPnP server to stream across the network to your player? I haven’t used in that mode, only using for its excellent performance as a renderer feeding DAC direct (via USB). However when Audirvana first added DNLA/UPnP server capability to Audirvana I recall people had problems using it with Naim streamers, possibly because one or the other didn’t follow the universal protocol (my interpretation). Maybe someone who has used Audirvana in that mode and has overcome the problems can help.

Using it as a renderer, with the Mac Mini it is on as a store, i set it up on a “late 2012” model MM, which was the last I believe that had non-soldered RAM. It has a Core i5/2.5GHz processor, and I installed 16GB RAM and a pair of 1TB SSDs. The RAM may be overkill, but as Audirvana loads each entire ‘song’ into RAM before playing it guarantees even whole-album hi res tracks can be loaded without without trouble. I stopped at IOS El Capitan 10.11.6, because that is the last that allowed Audirvana to be run in Direct mode (at least, without a patch to IOS first. I use it fully optimised (Direct Mode - Integer Mode 1, dedicated usb port, sysopt etc), and as well as silent the MM is headless, with no screen or keyboard - if I need to access it. as opposed to just using Audirvana’s control app on a phone or tablet, I use VNC (free).

It works very well in my usage, with one limitation: poor handling of files tgat have poor, missing or inconsistent metadata, which to me is a pain and one day will prompt me to move on. If your metadata is good - or just stream from Tidal or Qobuz etc, that shouldn’t be an issue.

However when Audirvana first added DNLA/UPnP server capability to Audirvana I recall people had problems using it with Naim streamers, possibly because one or the other didn’t follow the universal protocol (my interpretation). Maybe someone who has used Audirvana in that mode and has overcome the problems can help.

I am one of the people having this issue, and neither Audirvana nor Linn (I use a Linn streamer) bothers to fix it, so I move on and use Roon instead.

Unfortunately to me Roon is not a viable substitute for Audirvana!

Ah - that’s sad to know as I was hoping to use Audirvana as a way to avoid Roon.

So every upnp route I have tried to feed Tidal files to my 272 has failed.

@easeback1 have you managed to get a stable feed of Tidal to your 272 via Audirvana?

If it really is impossible to get a stable Tidal feed to a 272 from Audirvana then I may just have to wait a while longer to see whether a 372 finally emerges.

That would be shame as Audirvana sounds great right now playing Strid by GoGo Penguin.

So every upnp route I have tried to feed Tidal files to my 272 has failed.

I use BubbleUpnP and can stream Qobuz to Naim devices perfectly. BubbleUpnP also supports Tidal and I would have expected it to work OK.
What happened when you tried?

I use Audirvana in upnp mode to a Muso 1 and previously an NDX. I’ve never experienced any notable problems. I’ve had Audirvana running on a Windows laptop for the past 2 years.