Avoiding wired connection without using optical. Flawed idea or not?

There’s been a fair amount of discussion about the merits or otherwise of having an optical fibre link between a music network and the router/rest of the household network in order to try to avoid possible noise issues.

I am thinking that since I don’t use any streaming services for the main system that an alternative to a fibre connection would be for me to use a separate router for the hifi which will connect to the main router only by WiFi and hence avoid having any wired connection to the rest of the network. My only need for internet connection is for App control and metadata retrieval, so WiFi should be fine.
Has anyone else tried doing this? Would it work?

You might have a lot of faff setting it up - would need to make sure everything appeared on the same subnet amongst probably many other things, but… the functionality you describe is (almost) a mesh network. You could set up a mesh node near the hifi and plug in an ethernet switch for all the hifi related network kit.

Or - you could just use WiFi to the streamer!

I’m confused as to what you asking for?

If you mean an access point wired to your streamer then the AP wi-fi to the router, then as said a simple mesh system or even just an AP will do the job. No new router required.

It’s simple enough to connect a wireless access point to your streamer, which links it to your main LAN WiFi. With 1st gen Naim streamers this was a common workaround to replace their poor built in wifi modules with something that worked reliably.
I’m not convinced that this would be a sound quality upgrade, but there’s nothing to lose by trying it.

Hopefully, a diagram might help. The idea is to use a spare DrayTek router that I already own, but am not currently using, purely as a WiFi access point within the existing network that’s built around the Sky Routers IP address.
I *think * that it can be done, but am not certain and also don’t currently know how to go about setting the DrayTek up in this mode. 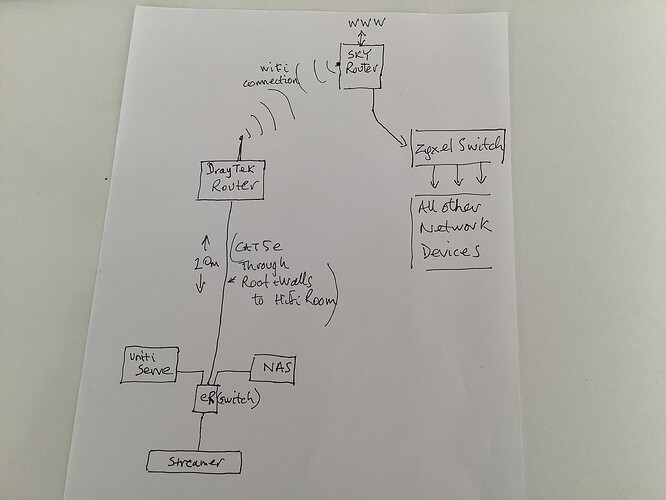 Currently, the network is arranged this way except that the 20m Cat5e connection runs directly from the Sky Router to the eR HiFi switch.

I believe you can set up the Draytek router as a simple repeater. This will then give you your diagram.

Thanks Bruss. I remember that DrayTek are very good at putting comprehensive set up instructions on line, so I’ll take a look at that shortly.
Will be interesting to see if it makes a difference or not

That should work fine. It’s generally better to use network hardware all from the same brand as they’re much more likely to work well together, so for a long term solution I would probably get 2 or more Mesh WiFi devices, but as you already have the Draytek, there’s no harm in giving it a try.

I’m assuming you could do a simple test to find out if the ER is sensitive to what’s happening upstream before trying the new wireless setup. Try starting some music playing and then pull out the cable between the ER and the Sky router and see if you can hear a difference ?

Hope you’ve looked at the wifi channels in the area, you may make things worse by adding an extra WiFi device, also you may half the bandwidth using wifi as a repeater. 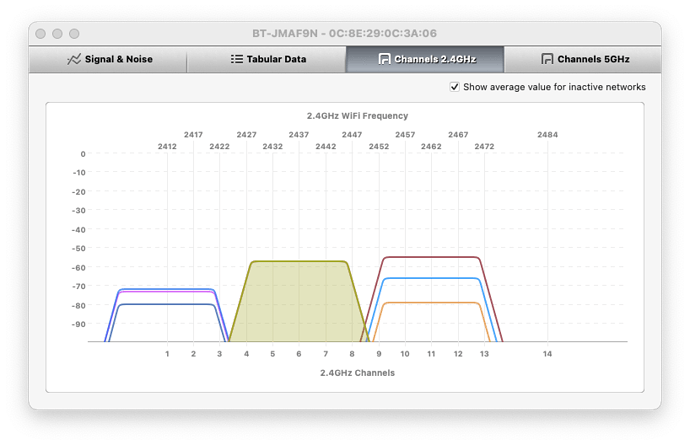 In Europe there are 2 extra channels compared to the US.

Excellent idea James. I hadn’t thought of doing that

.
Just tried it and yes, it’s different and I think better. I’ve been playing this album 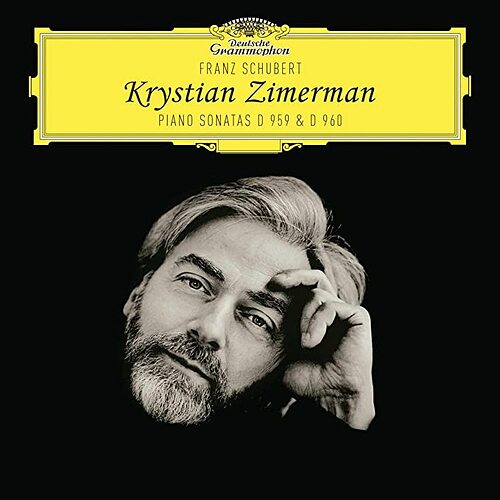 a lot recently and noticed that at volumes around 9 o’clock on the 552 (a bit higher than realistic, but nicely exciting) it can ring in my ears a bit on the loudest passages. Remove the internet connection on the eR and it doesn’t do so, even at silly volumes. There’s a nicely relaxed, but still alert feel to the presentation. I will investigate further with other albums this evening.
Thanks!

Thanks NogBad,
I wasn’t aware of any of that, but remember that there’s no music signal handling involved in what I’m hoping to do. As long as there’s sufficient bandwidth for the Naim App to work and for metadata to be searched on line then I’ll be happy enough.
Cheers,
Kevin

If you have complete control of the wifi environment around you or there are no other networks then sure, using 1/7/13 will provide three nicely separated, non-overlapping channels. However, in busy environments most home ISP routers will be configured to auto-select and prefer 1/6/11. In that situation, using channels 7 or 13 would create interference.

Always best to do a site survey as you suggest.

I’ve read that some equipment has problems using 12/13 because they are not standard or low-power only in the US, although that might be ancient history now.

Good to try it Kevin. It does show further that further experimentation upstream is worthwhile. I’ll be interested in your findings

What happens if you take this one stage further, and pull the Ethernet cable out of the ND555 while it’s playing. The buffer is big enough to play a typical track of 3 munites or so duration in 16/44.1 so you can hit play, pull the plug, and still have time to listen. Then the entire network is eliminated.

You must have only ONE router on your home network to connect between your LAN and internet. Two routers will cause issues, unless carefully set up and configured with advanced functionality that most consumer devices don’t support.

Using wifi as a bridge has to be done in a special way for it to work optimally… you need to ensure it’s point to point ‘adhoc’ mode. Not all access points support this.

As far as your streamer… one needs to connect either via wifi or Ethernet through to your NAS/ media server. The streamer configures itself for optimum network operation depending on mode of operation. To fool your streamer with an Ethernet connection, and then use a regular wifi hop to your NAS/media streamer means your streamer will not be working optimally and possibly impact SQ if it’s underlying protocol machines are working harder to keep optimum.

What happens if you take this one stage further, and pull the Ethernet cable out of the ND555 while it’s playing. The buffer is big enough to play a typical track of 3 munites or so duration in 16/44.1 so you can hit play, pull the plug, and still have time to listen. Then the entire network is eliminated.

Also, the ND555 can replay from attached USB drives. This does not require any wired connection to the LAN, just a wireless connection for controlling replay.

If replacing components in the wired network upstream the ND555 has a perceivable impact on the sound quality, an even greater impact should be obtainable by eliminating the wired connection altogether and just streaming from an attached USB drive. Does this yield higher or lower sound quality?

Also, the ND555 can replay from attached USB drives. This does not require any wired connection to the LAN, just a wireless connection for controlling replay.

But USB memory sticks can be inherently noisy… so I can’t see why you are neccessarily preferring it over an Ethernet connection.

Remember at the relevant low levels, Ethernet and USB look rather similar… albeit half duplex connection for regular USB.