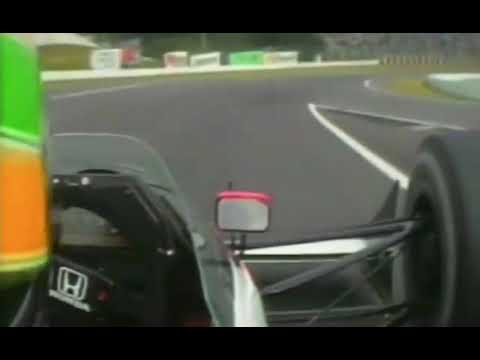 “A” great driver. Never a fan though.

Total legend and an influential figure in the sport like no other.
I rather trust the opinion and insights of a seven time world champion who claims Senna was a major contributor to his achievements on the track and life. Even “the professor”, left aside their acrimonious battles on the track, attended his funeral in show of respect for the great man. We should do the same and celebrate his life.

I remember watching the accident, in fact, I saw all the accidents that weekend, Rubens was fortunate, Roland and Ayrton were not. A tragic weekend.

@paulbysea, me too. It felt surreal and very sad. I stopped watching F1 for years after that. Senna was so obsessed with winning. While some may not think he is the greatest driver ever. His charisma was magnetic.

Stopped watching F1 after he died.

I don’t think he could have dealt with the speed, the emotional control and lack of mistakes that Hamilton has. But we will never know.

Ayrton was certainly one of the best. We’ll never know who was the greatest F1 driver, too many variables across the generations and even amongst his peers, there were variables providing advantages and disadvantages. He’s right up there in my books in a select group; but each of the group members are also greats.

Hamilton as a comparison to Senna? You have to be kidding. No driver in the modem era has come remotely close.

That’s a very strong statement. He was clearly very fast, but some of his on track behaviour and his level of Sportmanship left a lot to be desired. Refusal to pay fines because he thought he was too important etc etc.

Also, we must not forget that he had God on his side.

lack of mistakes that Hamilton has.

It’s easy to not make mistake when there’s no pressure. He’s made mistakes in both of the last two races, proving he’s no robot. But regardless, definitely a great driver. I guess we’ll never know how he would have compared to Senna. (And in which generations car, current or Senna’s?)

The comparison was as a driver, not as an ambassador for the sport. He (Senna) was braver than anyone in the modern era. Schumacher could make more out of a car that was not the best. Prost could make a car sing. The Mercedes of the last few years is so far ahead of the field that to not win is almost impossible unless the car breaks, which it rarely does.

He was great driver, i was watching the race on live TV, still remember the scene:(

I remember how he was fast in rain with underpowered Honda

@w33logic Not sure I agree with that. If Hamilton has a DNF does that mean Bottas walks into a win ? In 2005 F2 Lewis won 15 from 20 races, then next year did GP2 for a single season and won it with 14 podiums. Yes he is in probably the best car at the moment and previous seasons but to ignore his non F1 seasons is a bit short sighted I feel. Anyway this thread is about Mr Senna RIP and I for one miss him and his sublime skill. Yes he did have flaws but when he was on song these was nothing like him.

If Hamilton has a DNF does that mean Bottas walks into a win ?

We’ve had a few seasons like that recently, yes. There’s even rumours that Mercedes a few seasons ago was dialling down its engine because they were so far ahead that they could have easily lapped the entire field, every single race. They feared the FIA would take action if their dominance would be that large.

Whether you liked him or not, Senna was the greatest driver of all time. There are numerous and too many to mention examples of this. Donington 1993 he was in his McLaren that had a disadvantaged engine. He was a whole 1.65 secs off the qualifying pace. It chucked it down just before the start of the race and he went from 5th to 1st within 2/3rds of the 1st lap and by the next lap he was 4 secs in front.

His 1984 Monaco wet race in the vastly inferior Toleman.

His success and help with Lotus 1985.

His knowledge led him to be the one everyone listened to about safety. Senna and Lauda worked together and his ultimate price led the way for a complete change. Even on the eve of his death, he led the argument to have the race not go ahead and there’s photos of him with the other drivers, arms folded looking down, clearly showing his attitude. He was always the leader and spokesman of drivers.

There will never be a driver like Senna again. An innovator that teams listened to and designed from his feedback. Drivers are like robots now. Just sit in the car and be told what to do.

I stopped watching F1 after Senna’s tragic death. Apart from Prost, there was no other driver worth watching for me. I loved their on track battles which sometimes crossed the line.
I can’t comment on Hamilton’s prowess because I’ve only seen clips but from what I’ve read, consensus is that the car is the star. I also read his team mates have often complained their car isn’t as good as his.
Senna will always be my greatest F1 driver. RIP Ayrton.

Drivers are like robots now. Just sit in the car and be told what to do.

I agree with most of what you said, but this just isn’t the case. At least not for every driver, in the same way that not every driver was like Senna in his day. Max Verstappen is an example, he wants to know about every bit of the car, including the engine. A real “geek” in that sense. Perhaps of interest is that he won his karting Championships while not driving for a factory team. He and his father tuned the engines and setting up the chassis themselves competing against the factory teams supplying them.

To be clear, I’m not comparing him to Senna (although in style he probably is the closest we’ve seen in a while), just replying to that particular comment.