Yes just read, another gone. Left us some good jokes though.

A woman walks past a petshop and spots a magnificent parrot in the window.

She rushes inside and says, ‘How much for the parrot?’

‘Well, I must confess, it was brought up in a brothel,’ said the shopkeeper. ‘And, to put it politely, it has quite an extensive vocabulary.’

So she takes the parrot home, puts its cage in the living room and takes the cover off.

Then the woman’s two daughters walk in.

Then the woman’s husband walks in, and the parrot says, ‘Oh hello, Keith!’

Very sad news. There were times on I’m Sorry I Haven’t a Clue where his laugh would just cut through the rest and it always made me smile.

had the pleasure of seeing the show live a few times - Humph, Tim, Barry - I still have the Kazoo !

“Analysing comedy is like dissecting a frog. Nobody laughs and the frog dies”

“They say that adultery is the main thing that harms marriages, but it’s not. It’s boredom”

Very sad news. He was a very funny man, and came across as a thoroughly nice bloke too.

Sad news indeed. I’ve recently been listening to the ISIHAC compendium audio-books before going to sleep, and marvelling at the easy brilliance of the original cast, witty intelligence at all times. Barry wrote for pretty much every major name in British comedy for a long time, and was hilarious in his own right as well. A genuinely major figure in British comedy, by all accounts a lovely bloke. RIP Barry, thanks for the many many laughs.

I’ve accidentally killed your cockerel and would like to replace it.
Suit yourself. The hens are round the back.

Such a long lasting absolute talent both writing and performing. Wrote for almost all the great comics. I can’t really remember a time when ISIHAC and Barry were not part of my listening life. I remember the show had Bill Oddie and Graeme Garden on originally sometime in the early 70’s but Bill was replaced by Willie Rushton.
Barry and the team of course being masters of double entendre, something that’s on its way out much to the regret of many.
For once when people say they will miss someone, an awful lot of us really mean it.
RIP Barry

He was genuinely funny. I grew up listening to the wireless as radio was called then. I’ll miss him. He worked with a lot of able people.

I met him in a green room before and after a TV show in the mid 80’s (it is a long story). With him were Stephen Fry, Michael Bentine and Ben Elton

Bentine covered a table cloth with a huge cartoon for one of my friends who happened to be 21 that day, Ben Elton was aggressive, Fry bonkers and Barry Cryer was just effortlessly friendly, funny and natural with no discernible difference to his persona on set when recording the show.

He made the world a jollier place.

He was my hero. Saw him at a comedy festival where the young attendees had no idea who he was. There were thirty of us in the Guildhall at Portsmouth which hold 2k. He entertained us as though we were in his front room for two hours.
Bloomin marvellous.
RIP Barry.
Doug

From an online obituary. Glad he stuck to his day job and not music!

Cryer also had a bizarre addition to his long and distinguished CV with a surprise number one hit.

Novelty song Purple People Eater had already become popular after its release in 1958, but a cover version by Cryer achieved sudden success in the Nordic countries.
It became number one in Finland.”

Very sad news, an incredibly funny man, and didn’t need to be offensive or vulgar to be so funny, sadly this is a rare talent today it seems! 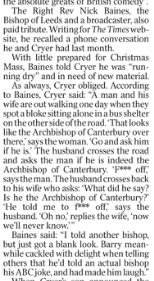 these are just perfect, 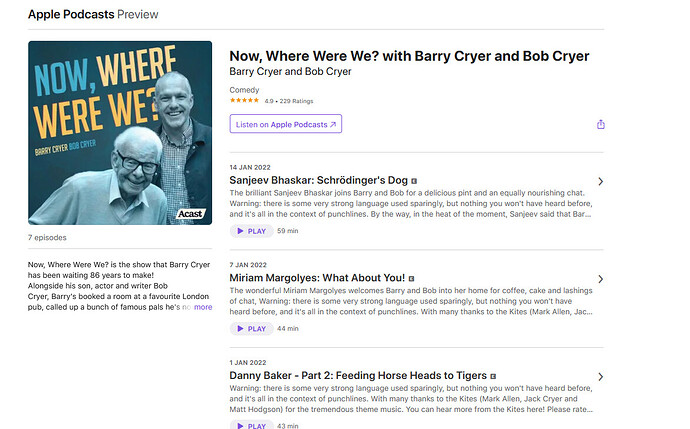 I think he would have appreciated this:- 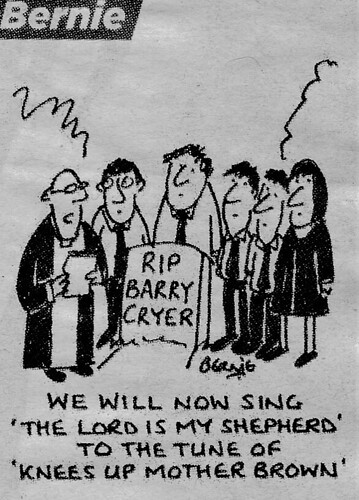