Fraim etc makes no financial sense with a second hand two boxer but I am constrained by space with how they’re arranged, for now they have to be stacked, what’s the general feeling on isolation? Soft, Sorbothane, squash balls (!) or rigid metal spike and cups or wooden cones?
Thanks

What are they sitting on now? If you have a little space, I would try to put some distance between the two boxes. Maybe a one-shelf ‘rack’ for the preamp, with the power amp sitting beneath it.

The most important thing is to keep the two apart. Even a couple of bits of wood and a few housebricks is better than stacking one on top of the other. If you are feeling flush you can get one of these for £60 on eBay. 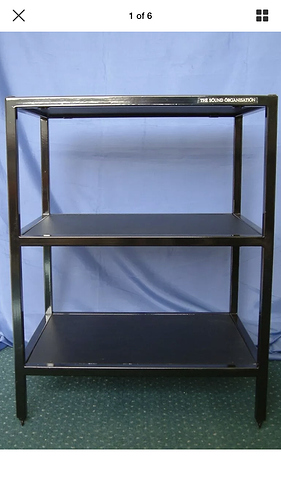 It does, but it’s not a good idea for good sound. They need their own shelves and a bit of separation.

Well for now they’re not going to get it!

any consensus on the forum for hard or soft decoupling? I’m not unhappy with the sound just seems a quick fix and a good idea to give them some “space”

I’m afraid you have had about the best advice your going to get regarding isolating those boxes putting sorbothane hemispheres on top of one box and then sitting the other on them is going to do no more to isolate them than the feet they already have.
They really need to be sepertated from each other on their own shelf however as you say your not unhappy with the sound so I’d just leave them as they are for now.