BBC to remove services from TuneIn

Hopefully, Naim won’t be affected as they use vTuner.

Keith, do we know why?

It appears to be because TuneIn will not provide listeners data to the BBC.

Thanks, seems a same strange stance to take, given one can’t obtain usage and identity data by radio.
I don’t like the tendency of some services providers, now it appears the BBC to require its users to use bespoke limited applications for their services, unless a service aggregator conforms to its specific requirements on meta data… it appears a rather retrograde and regressive step and takes us back in time to the era of limited service portals and walled gardens… what many of us involved in IT consumer services in the late 90s were working to move away from… the commercialisation of meta data appears to now be constraining usage and consumption behaviours… talk about the tail wagging the dog.
It’s funny despite all these new enabling and liberating service technologies given the chance then the preference so often is limitation, centralisation, and command and control … now that would be an interesting PhD.

What a shame… The vtuner sound quality in my case is often lower than that from Tunein.

Very poor as usual from BBC. It should be a subscription service for those that want it. BBC takes £154 from me & many others who would love to unsubscribe. Radio is the only value I get for my money and that service has deteriorated. There is nothing on BBC TV these days I watch so why do I have to pay for it? I use TuneIn radio regularly and now BBC won’t even use that because it can’t snoop.

Reading various press & in between the lines …
It’s not just Tunein that BBC is changing (pulling out of), other 3rd party services are affected, & it not all about providing data. It looks to me to be part of the switch & promotion of BBC Sounds, replacement for the iPlayer app & new BBC platform for mobile & podcast.
BBC Sounds however does not appear to have won friends with the people I have spoken to about it.

Presumably this will also apply to the Bluesound app/devices. This will significantly affect how we listen to BBC radio - which we pay for through our licence fee.

We have discussed this with BBC Engineering and this will not affect the Naim platforms on BBC radio support. We are fully compliant on our usage of the BBC servers and requirements on device declaration. As and when BBC require extra extensions to access new features / be compliant with new requirements, we will update software accordingly.

Regarding sound quality the Naim platform via VTuner uses the highest quality 320K HLS streams if the listener is in the UK and one of the few manufacturers who have the full BBC network exposed in 320K HLS. TuneIn do not have any superior stream to access and typically they default to the lower bit rate MP3 stream (see screenshot of tunein app playing BBC Radio 1 and the stream variant it decided to pick). 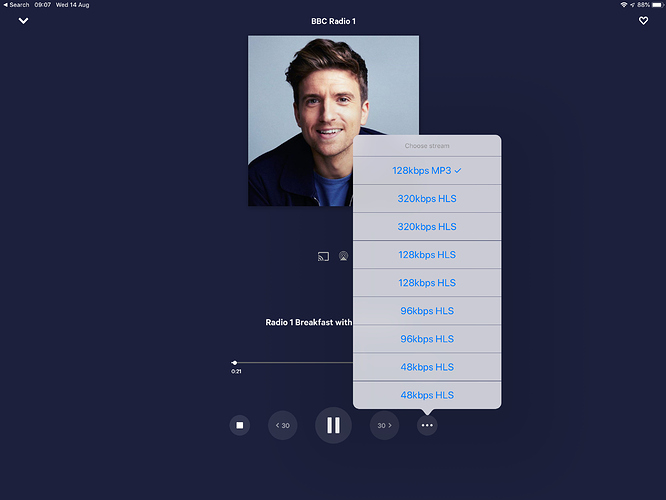 My usage of internet, TV, sat navs, paying for shopping by card, streaming services etc. etc., has dropped dramatically recently. Back to cd’s, maps, cash, walking in forests, etc. for me, and I feel a lot better for it. I don’t buy anything where adverts have been targeted at me based on my remaining trackable behaviours, and one company has now lost me as one their best customers of the last two decades.

If only I had the courage to go completely off grid.

talk about the tail wagging the dog.

No surprise though, right?

It’s ALL about the data.

I read an article recently stating that Google Chrome is no longer primarily a web browser. It’s a data collection app that happens to provide web browsing capabilities.

How long before we cant use Google Maps w/o signing into it???

Do you bring your smartphone with you for the walk?? If so, it knows where you’re walking . . .

Haha! Bart, no I don’t. I have no need or desire to be contactable 24/7. However, if I am mountain biking in forests then I do, and I set Strava to follow me, but that is a deliberate choice made with my eyes wide open to what is going on. I know I can’t hide completely from prying eyes.

I think one can take the prying eyes thing too seriously and going totally off grid isn’t something I would want to do because there are too many advantages.

For one example, if the OP will excuse me going off-topic briefly, during my recent holiday in France, we used the autoroutes to get quickly to where we wanted to go. Previously I have queued for ages to put coins or a credit card into the toll gates. This year we used a “telepéage” tag, which means I never had to stop at an autoroute gate and some I could drive through at 30km per hour. My wife who broke her left arm earlier this year didn’t have to try to reach through the car window.

The tag company, to which I signed up online, sent me a bill at the end of last month and they will direct debit it at the end of this month. That’s definitely very on-grid but it was fantastic compared with previous visits and I wouldn’t go back to the old way.

I agree; I’m really not paranoid at all about MOST of this stuff. I know that “they” are monitizing me; it’s the “price” we pay for free services, whether we know it or not.

Every once in a while I go into Google and delete a bunch of data. I suppose that if I ever fall and bang my head somewhere, it would be nice if someone could find my body if my phone is on my person.

I try to avoid Google, but it’s hard to do so. I resent Google taking photos of my cottage and car without permission and invading my privacy. I think they call it casing the joint. I would like to see it curtailed, but I doubt it will be. Be great to be opted out by default from these things and let those who want to give data away opt in. I am grateful that we can be ex-directory and use call guardian to block unsolicited calls and we can refuse to allow public access to the electoral register.

And the nice thing about that system I believe you are referring to, which I use, it’s about the tag, not the car or you… there is no correlation to your car or your actual location. (Just the tag’s location). Therefore you can give your tag to family members and friends etc… your responsibility is to settle the bill. It’s no more on grid than burying and using a bunch of rail tickets or buying a travel card for family and friends to visit around London.
You are not being monitored… just the tag that is transferable on the condition you settle any accrued costs … that’s how it should be…

I’m talking about Emovis which is probably what you use too.

It’s on grid in the sense that if it’s used two weeks in a year then someone who is paid for by my bank account travelled through those péage locations on those dates/times, but that is not information I am bothered about.

I did think about lending the tag to one of my kids to use, but I thought they would probably lose it or break it and anyway I would have to pay the bill, so I kept quiet!

But in principle I agree with your analysis and I think it’s great. Why didn’t I do this before?