In November 1968 The Beatles released their ninth studio album.

Featuring a plain white sleeve, the cover contains no graphics or text other than the band’s name embossed.

It was not a double album as rumours had predicted, it contained 13 tracks and ran for 39 minutes.
It is now widely recognised as their finest album and saw their transition into a serious rock band.

The Track listing was as follows:

Side 1 . Back in the USSR, Dear Prudence, Glass Onion, While My Guitar Gently Weeps, Happiness is a Warm Gun. Blackbird. I Will.

Hey Jude and Revolution recorded at the sessions were released separately as a single.

There were rumours of other tracks having been developed, including a McCartney song that was so annoying the engineers refused to record it. It was apparently called Old Bloody Dee, Daa Daa, which the Police later used as an idea for a song 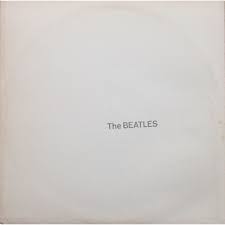 A good friend of mine, a fellow Beatles nut, came up with a separate list of songs for a single White Album LP. I did the same and we compared notes. Did they match? Did they hell.

Your list above would have made a cracking album, but I’d have replaced ‘Birthday’ and ‘Mother Nature’s Son’ with ‘Martha My Dear’ and ‘Savoy Truffle’ respectively.

And so it goes on

were rumours of other tracks having been developed, including a McCartney song that was so annoying the engineers refused to record it.

And yet those same engineers thought Revolution No.9 was essential to capture. Ob ladi ba what?