“This user’s public profile is hidden.”

Mildly irritating when a member refers to ‘my setup’, which prompts an ‘I’ll have a quick look in his/her profile’ response only to be met with the above.

I thought it might be amusing to read of other examples, of which I’m sure there are many.

The one that gets me is
‘Trespassers will be prosecuted’
This is meaningless, there is no prosecution for trespassing (in England at least). You would have to damage property or in some circumstances have an intent to reside on the property without authorisation to have the possibility of any prosecution.

The crushing of one blade of grass has, in case law, been defined as sufficient to be considered trespass.

‘Giving 110%’ applied in particular to sportspeople always winds me up. Not sure if strictly an oxymoron, or just nonsense. The equally irritating ‘better than perfect’ is of course a tautology. 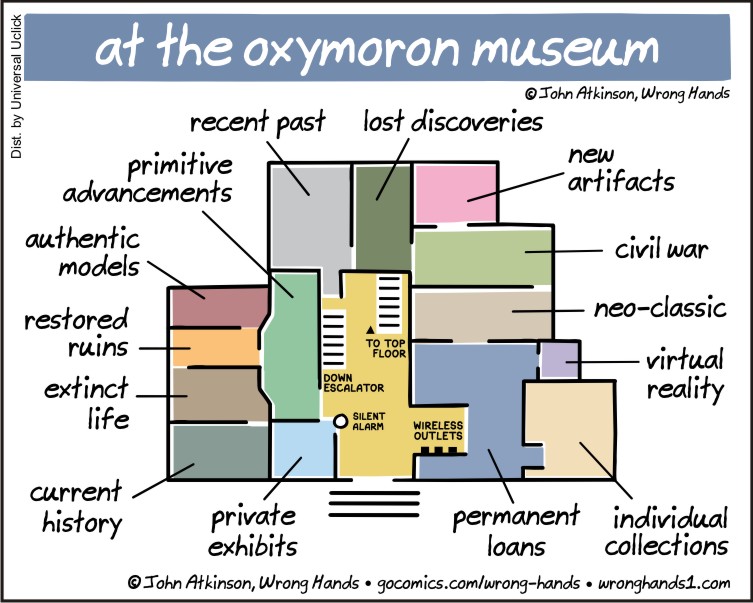 Love it! Stolen & shared, thanks.

Love it! Stolen & shared, thanks.

Trespassing on railways is a criminal offence, however.

I think that would be difficult to prove. It might have already been crushed. Which case are you referring to?
In any event, trespass is a tort not a crime, so you can’t be prosecuted for it. Sued perhaps in civil proceedings.

‘Giving 110%’ applied in particular to sportspeople always winds me up.

Actually (for a confirmed pedant) I don’t mind this. There can always be more than 100% of a previous value, ergo if a player has had a real stinker and his effort & attitude improve enormously he could quite legitimately claim to have given 110% [implied ‘more effort than the last game’].

Anyway. Very unique does my head in.

otherwise trespass on railway property would not be neccessarily illegal.

I like this chart, other than ‘new artefacts’… an artefact is an object made by a human being… can be of cultural, technical as well as historic interest. An artefact can also mean an non natural or unexpected observation in an experiment or investigation…

Therefore in many contexts (other than the purely historic one) a new artefact is not an oxymoron at all, but indeed a tautology.

Tautology - the interpretation of truth. Isn’t that in itself an oxymoron ?

Just listening to R4 and a question “have you done EVERYTHING you possibly can?” And the reply - “ oh yes, and more …”

“We have tried literally everything…”

Or, as I once thought…
‘Trespassers will be prostituted’