I’ve got an Uniti Atom and a NAP 100. Could I bi-amp my B&W CM8 S2 with the speaker out from the Atom and the NAP on the pre-amp out of the Atom?

As in passive bi-amping. Uncertain gain unlike active biamping, but no harm in trying if you’ve got the spare amp and if the speaker has separable terminals and you have additional speaker cable. If you do try, try it both ways round re which amp on bass. As for confirmation of whether the pre-amp output is usable at the same time as Atom’s power amp, someone familiar will gave to answer.

That’s interesting. So I assume the same could be done with the Nova. which would be a way of not having the Nova amp sitting idle when adding an outside amp.

I will give it a try. The Atom and NAP powermatch quite well on paper. Have to find some speaker cable first.

Yes both outputs on the unitis work at the same time. The benefit will depend on your speakers. Your speakers look like a fairly benign load so both of your amps are probably fine driving them on their own. You probably won’t notice a huge improvement. Probably just a difference that will be down to personal preference. I have played with this a bit in the past and have only noticed an improvement with bi-amping when the speaker needs a little more power to hold together at higher volumes. Give it a go.

Edit: Sorry I read the wrong system info.
Thought you had a nova and nap 250.

With the Atom and Nap 100, I’d say you will notice an improvement when you turn it up. It will probably play louder with less distortion.

Also just to add, the Atom and NAP 100 have the same output gain so you can do this no problem. I asked Naim support this very question previously.

So I did the test wich was very interesting

So I’ll stick to one amp

I cannot say that I am surprised…

Interesting finding. Thanks for sharing back the results.
Can you shed some light on the difference you find between the NAP 100 and the Atom.

The NAP has more body in the bass but the bass is less refined. Mids and top end of the Atom is just lovely, the NAP can’t beat that. I’m now boosting the lower bass 55Hz in Roon with the eq which gives beter result then bi-amping

Thats consensus for few unfortunately, many believe its the miracle ahead, which it is not, hope they are getting wiser, we should all abandon speakers made with bi-wire.

I just read what Focal and Cambridge have to say on bi-wiring. Both say better crossovers in the speaker is a better answer.

we should all abandon speakers made with bi-wire.

Just don’t bi-wire! Having the additional connections does not necessarily compromise a speaker.

However, the OP wasn’t biwiring, but passive bi-amping, which is different. (I personally don’t expect benefit except in rare cases, unlike active bi-amping.)

I’m ready with the sledgehammer… 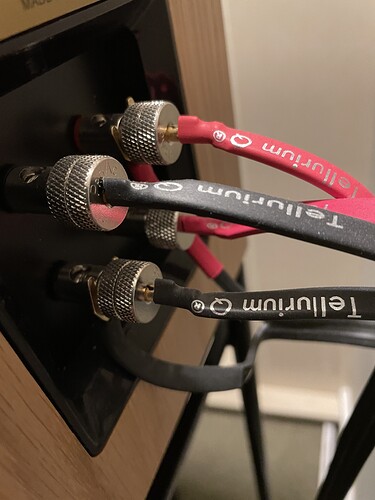 I have now (i was on vacation for a week

The NAP 100 definitely has more body but sounds dull compared to the Atom. With the NAP you lose a lot of topend detail. On it’s own it sounds as a step back to the Atom.

Did another try on bi-amping. (I had forgotten to neutralize the eq settings in Roon at first try… was in a rush i think) The bi-amping was a better experience. The NAP has more bottom. But again, the Atom on its own has more coherency and a top end with much more clarity and air then the NAP. In bi-amping there’s a gap in the middle.

Interesting, I thought that might be the case. The new Uniti range does seem to excel as single boxes.

Guessing that the Atom is relatively new - and the NAP100, is older (and not serviced)…? Perhaps not a fair comparison…?