No matter what you do, biwire terminals will always be a compromise, best avoided if possible.
Unfortunately market demands rule.

initially a NAP 200 I used biwired… but when I got a NAP250 I moved to new NACA5 lengths and decided to go single wired.

Indeed as said above using single wired wiring into a two or more drivers and crossover will lead to IMD compromises in most real world systems, which will attenuate when biwired. However in practice to what extent this is audible given the other compromises on passive speak playback I suspect for many is not much… yes I noticed a difference - but in the end I can’t say it got in the way of musical enjoyment when I single wired.

The AES library has good information from research and examination papers that demonstrate cause and effect - and why biwiring has the potential to be beneficial… not much from marketeers there - just engineering and science as well as subjective assessment testing as used by much of audio and recording industry.

As I have said before the coupling between speaker/crossover and amplifier is one of the more sensitive parts in hifi setups and is one for many that is perhaps least well understood by many as it can be complex. Reactive loads are very different to DC loads.

So yes if you can always consider biwiring - if you hear no real benefit - drop back to single wire - and keep leads as short as you can (within system constraints). In real world very much diminishing returns in my opinion. Also bear in mind because of reduced IMD on biwire - a signal may sound cleaner - but could sound less coherent in your listening environment if it changes the balance of reflections that you are used to. Its very often the case that there are unforeseen consequences of such changes.

I only recently became a convert to good quality jumpers. I hate the whole cable game but when I bought back a pair of Spendor 3/5’s which the new owner had removed the supplied plates with a piece of house wire I was shocked at the positive difference in the sound.

Recently purchased some 3/1R2’s and played about with a bunch of combos including some K20 jumpers, plus the sanctioned F-Connections with NACA5 and Naim plugs. Definite improvement with both over factory plates. Because of the positive impact I continued to research and look at options which there are many. A used pair of Furutech Jumper Series came up and took the plunge and was a revelation. I’ve owned many Spendor’s and the seamless midband was first thing that struck me. It was money well spent which are words that rarely leave my mouth when it involves cables!

I wish speaker manufacturer’s would not include bi-wiring or if they do at least include a well engineered set of jumpers as the gold/copper/brass plates are an embarrassment and in case of 3/1’s a serious compromise to the design. All is not perfect as the jumper spades do need to be checked as loosen over time and would have preferred a spade/banana but purchased used so beggars cannot be choosers. 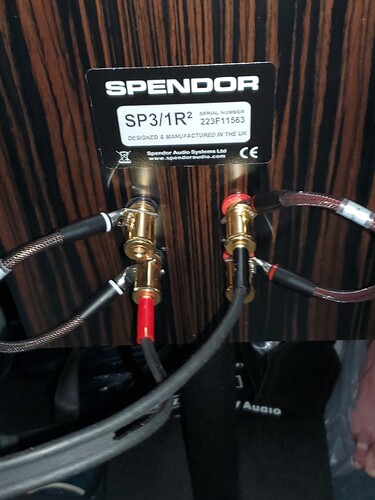