Billie Eilish - Happier Than Ever - discuss!

I curious about what people here think of Billie Eilish’s new album. I’ve monitored several other forums where opinion is really split between lovers of it, and ‘golden eared dads’ who are appalled by the distortion and compression. For the record I suppose that I am a ‘golden eared dad’ being in the music industry, having made records, owned a record company, produced other records and being over 60 and a dad. I think that it is a truly remarkable album and the recording techniques that she and Finneas use are a part of their art. I’d be very interested in the opinion of others here though…

It’s a fantastic record, yes it has distortion and compression what doesn’t these days it’s all part of modern production but I have had records with similar for decades, that doesn’t distract from the songs or the tunes. She’s a great writer and producing some very good genre bending pop music. Music is more than sq there are some people that have forgotten what the the heart of music is and only feel high fidelity is it. Very sad.

I’ve been playing it every day. Interestingly, it has a lot of parallels with progressive rock.

Well my daughter has been listening go this……so i have by default. It is OK……but would not bother for myself.

You probably need a better system to really hear it

Liked the first album and I’m hearing nothing to dislike on this. I’ve no problem with the production but the parallel with me is for someone utterly bland like Lianne La Havas. Similarly close miked; similarly quiet; clearly capable of belting songs out but emphasis is on restraint; lots of little production touches per song but… Eilish has the songs and something to say. La Havas has very poor song quality and nothing much to say.

The PMC 25.26 speaker’s are not doing the bass justice😁

I had to get the internal windows resealed to stop rattling to her first album! Her music certainly energises the room

I am listening to it now for the first time and I really like the flow of the album. As I am listening on my Bose in ears (working from the office, so with noise cancelling turned on) I can’t really comment on the sound quality.

Edit: talking about coincidence. Just received a WhatsApp message from my 17 year old daughter who is on the bus: "Dad, these songs by Billie Eilish you need to listen downstairs when no-one is at home: ‘Happier than ever’ and ‘Male fantasy’.

Listening to Happier Than Ever right now. I find Billie fresh and original. I suspect part of the distorsion or low quality mixing is intentional to make it more home studio sounding, or perhaps it is really home recorded and therefore the sound is showing some limits.

I didn’t check in internet regarding the genesis of the record, but may be the answer is somewhere in Google. In any case I find this “defects” (I would say peculiarities) interesting and dynamic, a bit of a paradox.

It is the third disc of a successful artist, in theory she has access to the best production resources. Another paradox that makes me think: it sounds just as Billie wanted it to sound.

In July 2020 my daughter and I were booked to a Billie’s concert that was canceled due to Covid-19. We had big expectations, we are trying to book again but the new locations are more limited.

The close miked approach is interesting as it adds an ASMR feeling to the music. The production by Jon Cotton on Jo Hamilton’s great album Gown is a good example of this and Holly Herndon specifically produced a track, ‘Lonely at the Top’ on her Platform album specifically to provoke an ASMR response.

Hell yeah it gives my little ProAcs a run for their money.

It also sounds great on the audio system!

I’ve played it a couple of times and think it’s a great album. I stream it in hi res through Qobuz and thought the SQ was fine.

I’ll be playing it again.

I really like her first album. In fact I listen to it every day. It’s the only album I listen to from start to finish. Her new album is pretty good but… yeah… some of the tracks are annoying. I’ve listened to in four times and had to skip the second to last track the last time.

My neighbor is pissed I stopped listening to string quartets and suddenly got interested in Billie Eilish.

She looks pretty miserable on the cover, or is it supposed to be irony? 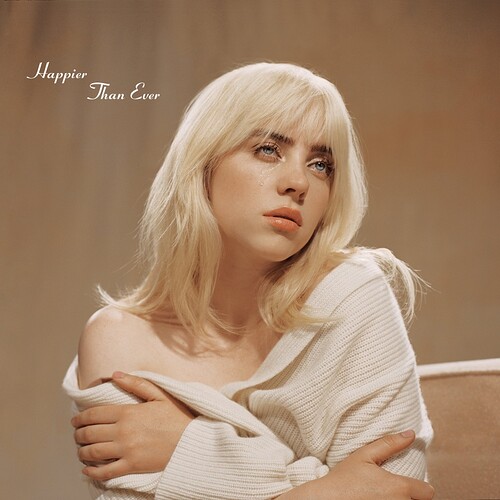 I love her stuff, particularly the Felt Mountainy sounding tunes.