Strange tree….we thought a few years ago it was dying and had to cut it back. This year despite the drought it is flourishing……some other plants are dead.

If you build it, they will come…

I put some Finch food out a couple of weeks ago but no-one was tempted, not a dickie. 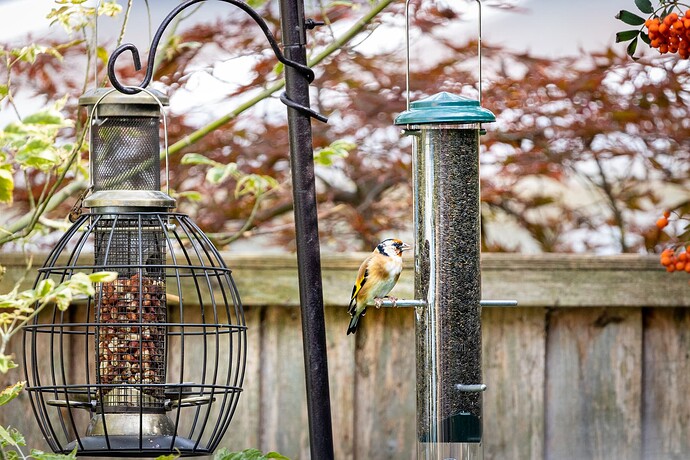 Must have told his friends. Including a youngster.

Bit jumpy though, took off as I was approaching despite taking it steady, sing songing as they went. Turned out I had a cat at my ankles. 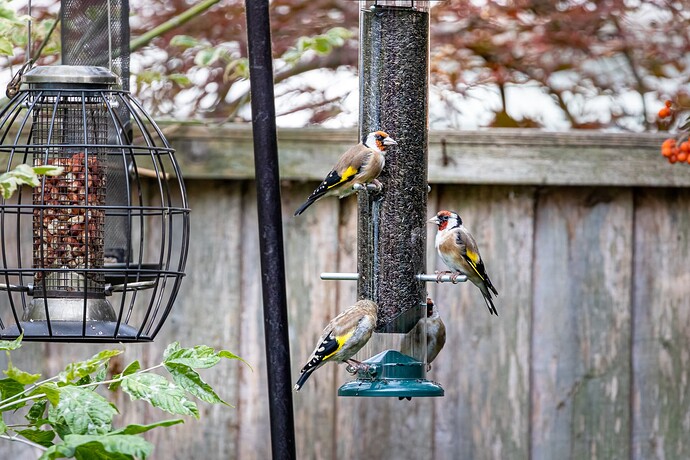 Can’t imagine why the finches would be nervous about a cat. 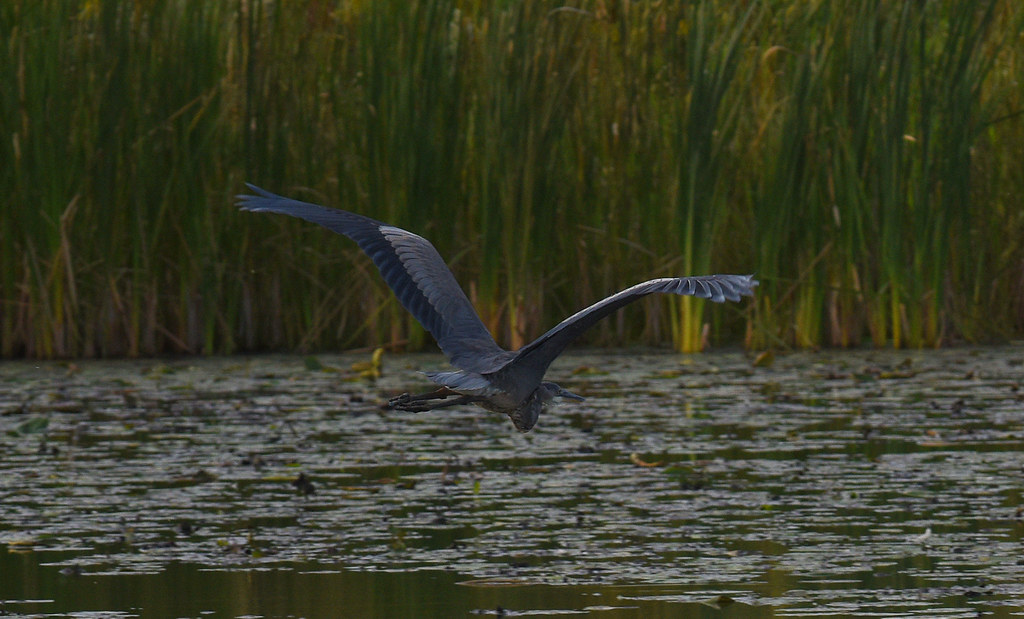 …A blue heron before darkness.

Been out along the river close to home and came across this guy, have no idea of what of bird of prey he is but he just floated around at the base of the hills. 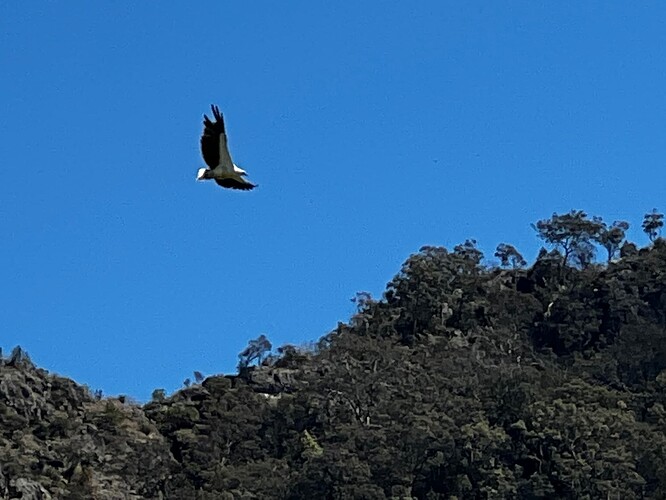 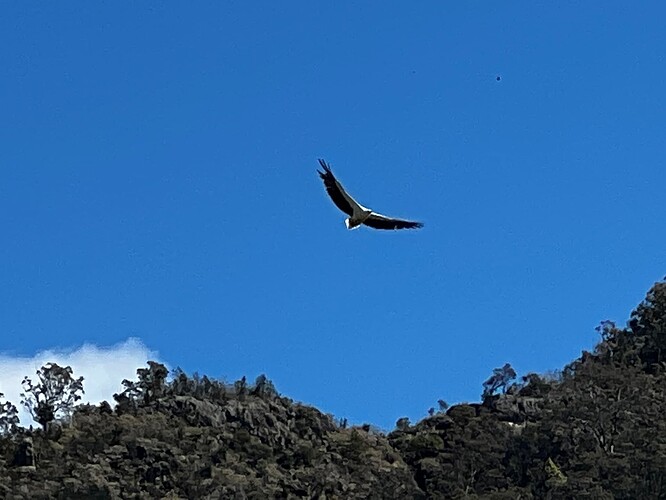 Sorry it was only snapped with my iPhone.

Update it was a Wedge Tail Eagle.

Yeah but he’s really not bothered about birds.

If a pigeon lands within about 3 feet of him he might flick an ear up but he knows it’s a lot of faff and someone else providing a bowl of biscuits with some dreamies sprinkled on top represents a meal requiring far less effort. And for entertainment he just goes and picks a fight with whatever other cat is feeling a bit bored.

Probably true of a lot of domestic cats but the birds don’t know that. The photos I posted earlier today it would probably be the opposite that eagle would and could take a cat, they’re been known to take lambs. Nature is a wonderful thing.

Yep, the Goldfinches seem a lot smarter than the sparrows… 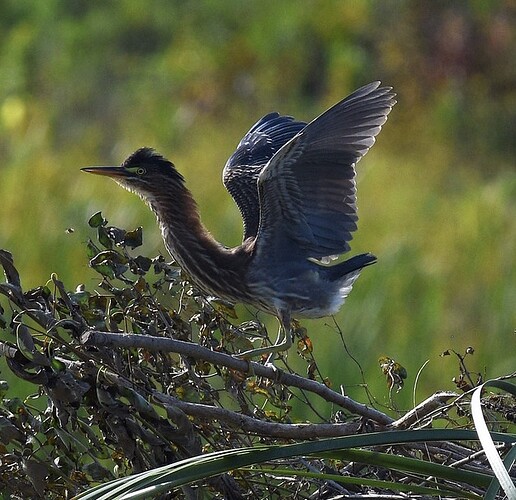 Around here they are all like the Green Berets, super secretive, always well camouflaged. 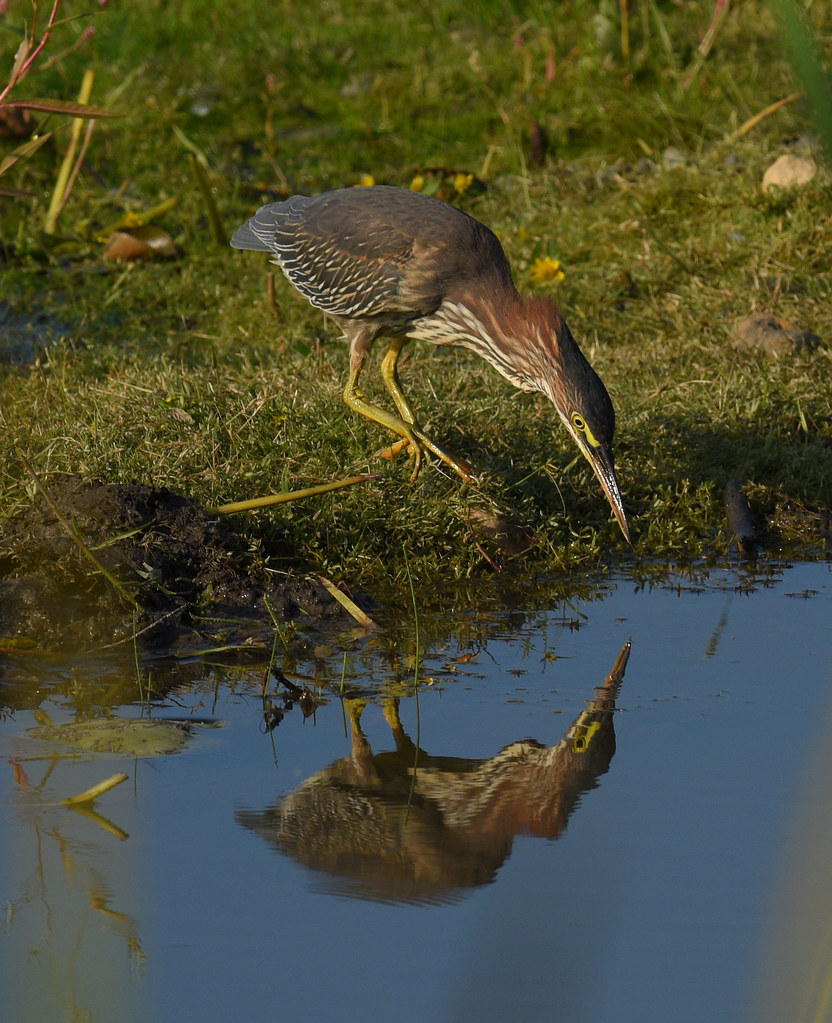 Another image of a young adult green heron. Usually they are active early in the morning or before sundown but this guy had his own schedule. He landed not far from where I was standing and started immediately to look for fish. Unlike their larger cousins, the blue and grey herons, the green ones prefer to keep their feet dry and avoid wading in shallow waters. In a few weeks they will be heading south to warmer lands.

About 4 weeks ago my pet wood pigeon disappeared. He has gone missing in the past for a few weeks, but it appears that he has left his mate behind.
She sits in the garden each day, on the garage, on the shed, in the cherry tree or in the bird bath. Presumably waiting for him to come back. 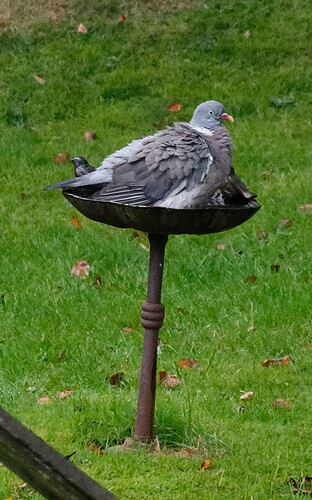 That’s a bit sad, they mate for life (I think) and he’s probably not coming back.

The water is becoming colder, and so is the air… 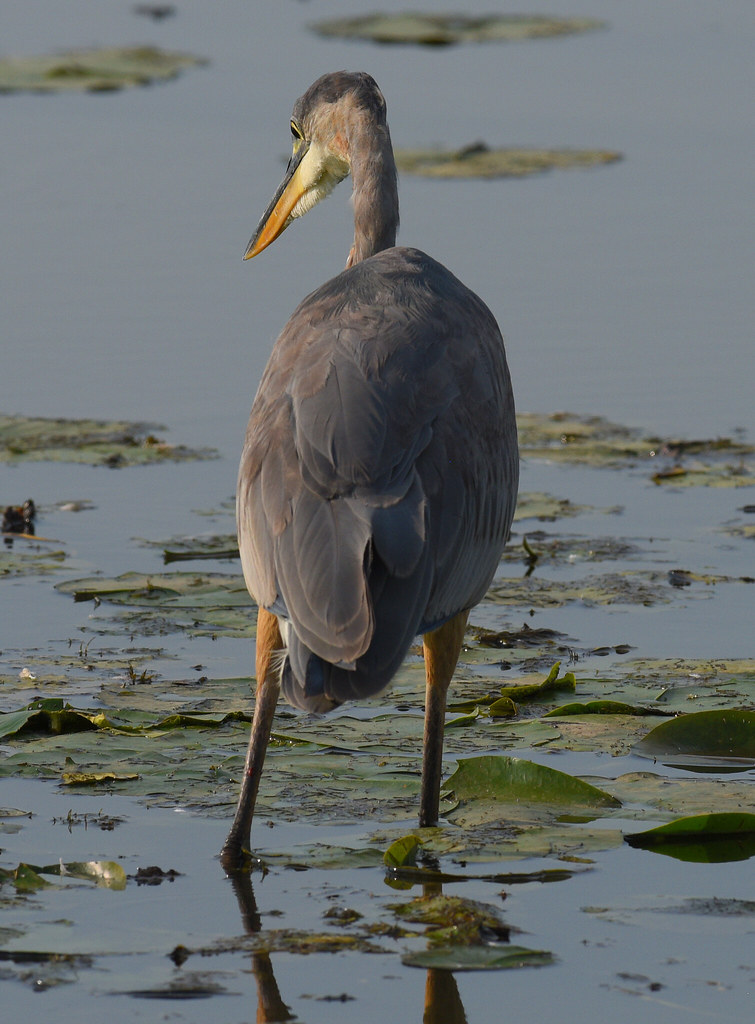 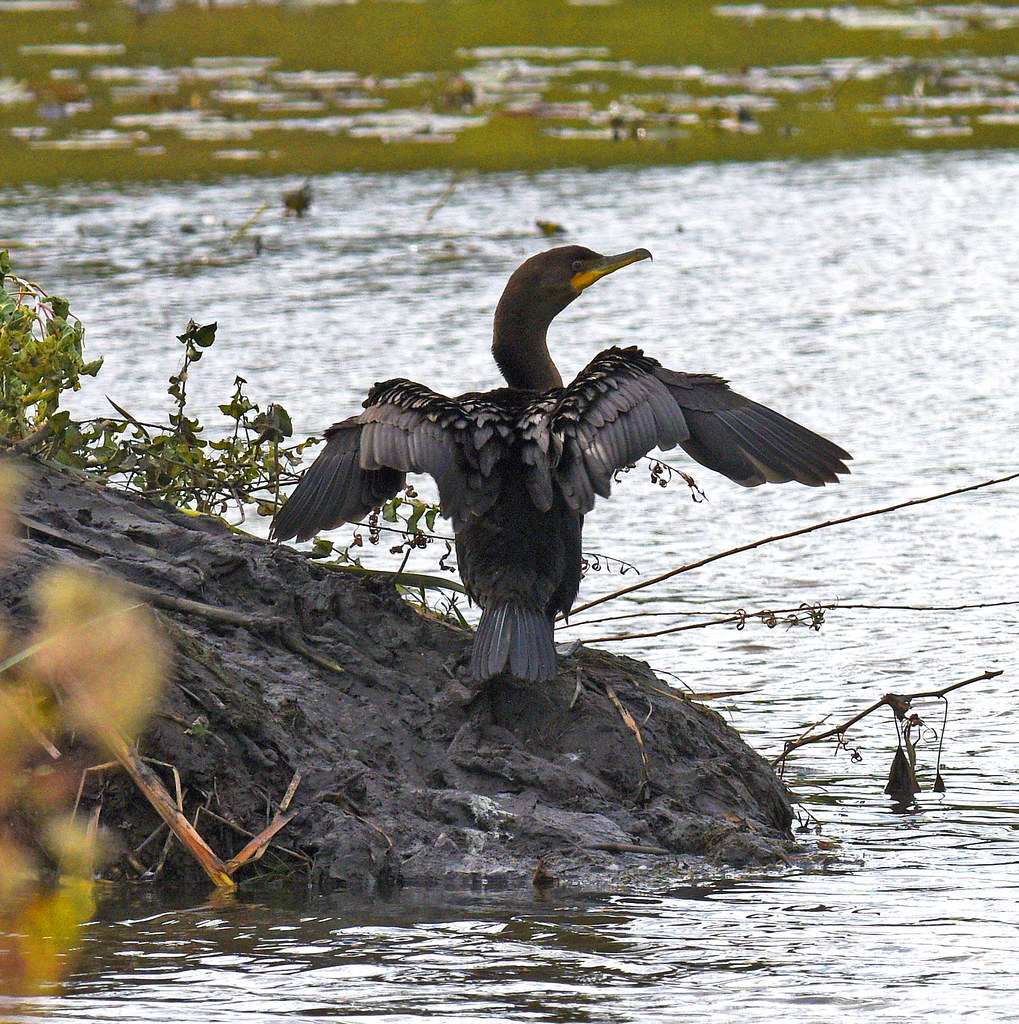 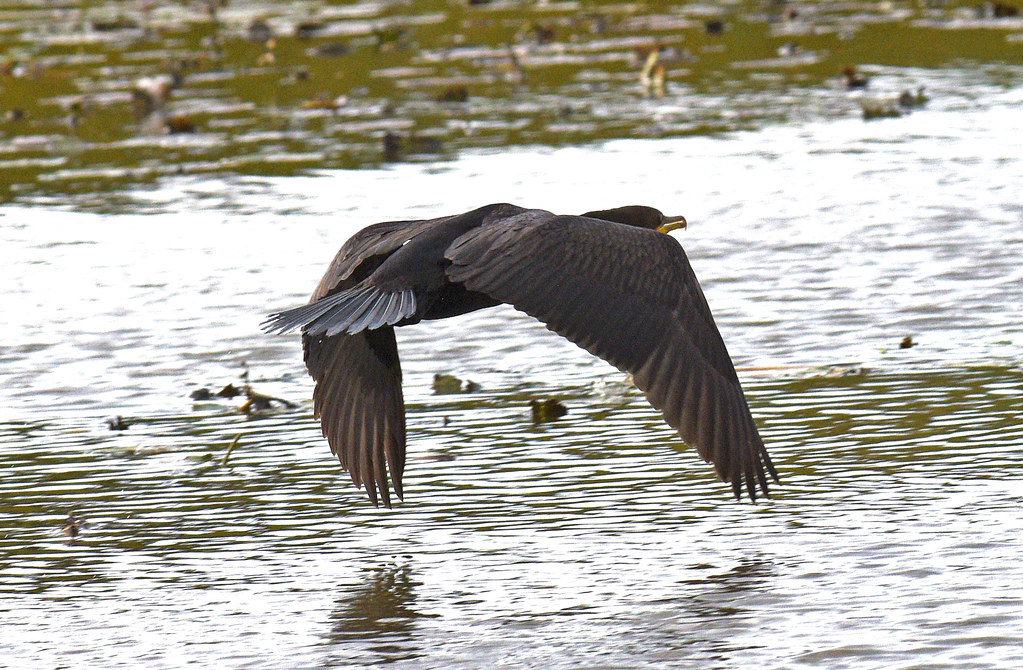 On a very chilly evening.

There is a very rare nighthawk in Wantage, close to my local area.
A member of the nightjar family, its normally a North to South America migrant so is way off course. 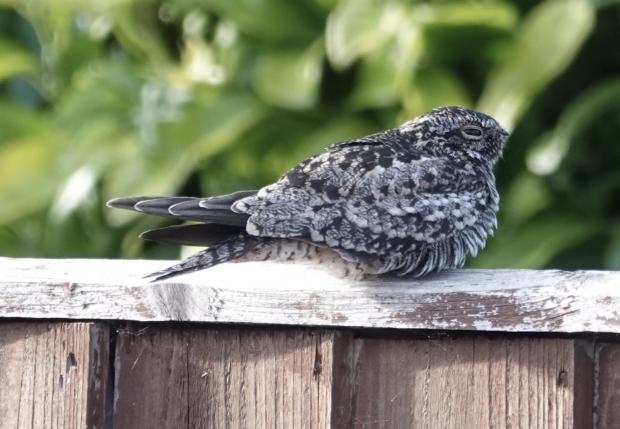 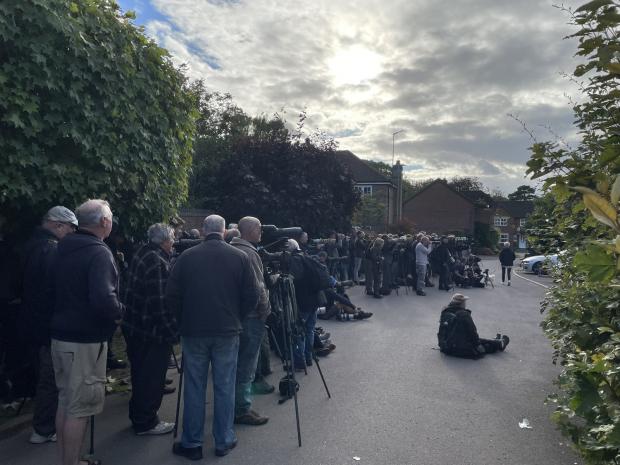 Residents have been up in arms, but to be fair to the twitchers, they’ve had a whip-round & raised around £4000 which has been donated to the village for local charities.

Yeah saw this in the paper, whilst rare vagrant’s are nice to see I do often feel that if I found one I’d keep quiet about it until we’ll after it’s left. Often these birds are very weak, ill, or disoriented and end up being pressured by inconsiderate “ twitchers”. Note I don’t use the term birders or birdwatchers. I appreciate In some cases rare birds end up on nature reserves,

I note this bird is just perched on top of a garden fence, not somewhere a healthy bird would consider generally.

On this occasion some money may go to the village but it does not give them the right to disrupt other peoples lives at all. As you can guess I have no time for hard core “twitchers” , I think the first part of the name sums them up.

Not as blue as the water 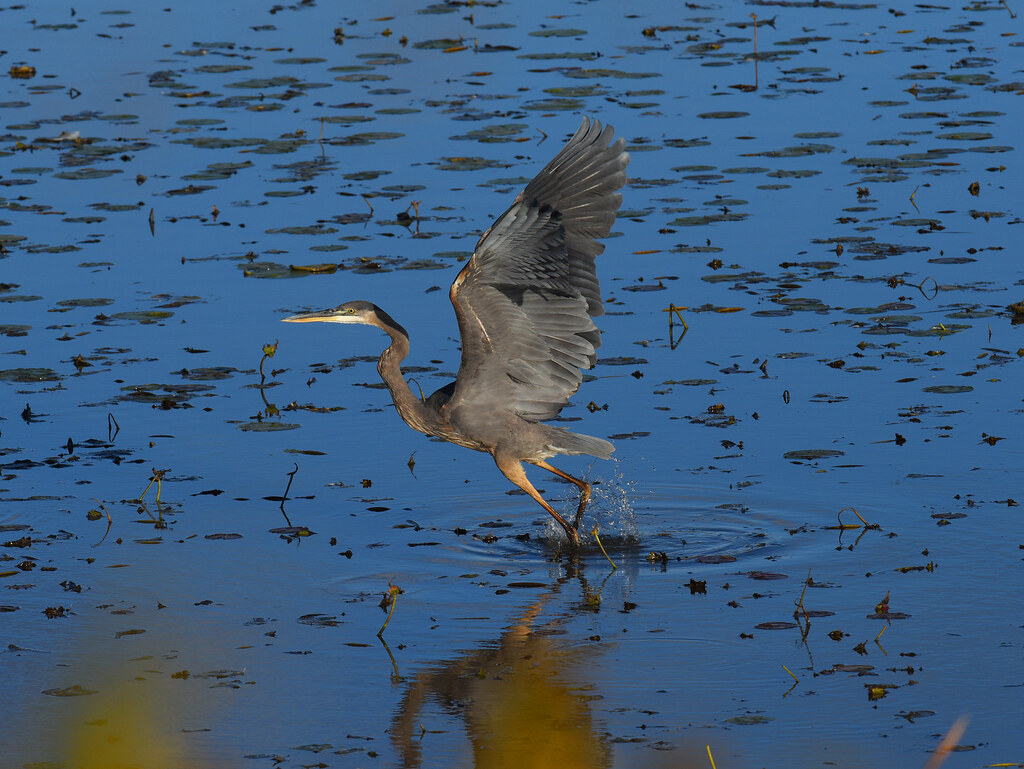 …a blue heron. Our blue parakeet at home is turning purple from envy, not liking a bit my interest in another bird.
I have been following for two weeks the same heron who seems happy to fish and pass his days in the same pond.
Here he is kindly flying parallel to me, enabling the old 300mm f/4 Nikkor to capture more than two of his feathers in focus.