Black Burndy Wellness - finally got a chance to do so - further Recommendations?

finally - after several years of intensive search - I got a black Burndy for 52/Supercap. It’s really hard to get one single.

After it arrived, I recognized, that it is way more stiffer than the grey one. The grey Burndy is like Butter compared to the black one. Time for some Wellness/Relaxing the Cable…
I have done:

I made it loose at supercap side 2 times after installation to check it there is any massive tension. There was only very slight tension, when getting it loose. Bending and massage in final position had helped

One positive effect comes with the stiffness - it hangs absolutely free, not touching anything else nor fraim, wall or other cable

Have I done the right steps - maybe too much of them

Had checked it her in the forum.

Is there any difference to the grey one? To be honest - can not tell yet

Thanks for reading, for not calling an ambulance and for any text to the 3 questions. 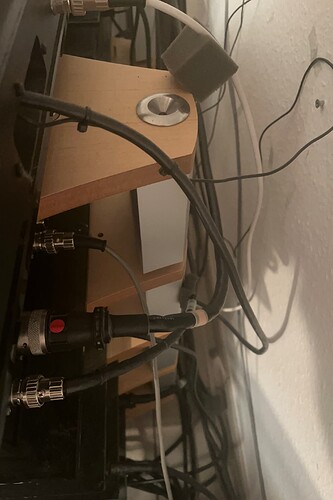 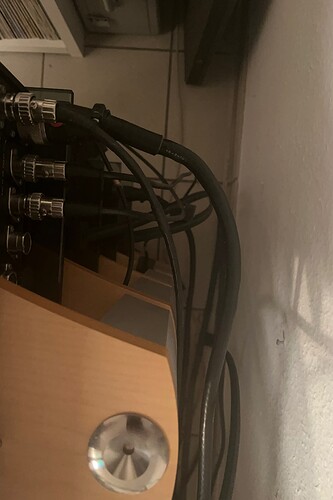 I’d lock up the collars on the SNAIC5 used for the Digital PS connection between 52 and SC.

The Black Burndy should easily outperform the Grey one.
It’s important to have the Snaic 5 as close as possible to the Burndy and touch in one point.

Re-formed it in a way it is to be placed in my setup. This was hard work, as I have a long distance to manage - SC in left fraim / 52 in right fraim

Is there a reason for breaking the normal convention of power supplies on the right?

Yes - need the pre under the TT and the TT must be right sided as much easier to access.

Snaic 5 must touch the Burndy?
They are now separated from each other as the snaic is softer and hangs deeper.

It might be better - the black one. Normally I love comparing A/B, but here it is a bit too much work with changing burndys

By the way…
Normally, I am over precautious with interaction to my gear. But the Burndy is so stiff and stable, even good old „kiss my shiny little A… - Bender“ could do no harm.
Fixing the plug took me a bit more courage

Thought that this is a nogo for all DIN connections

The reason for the conventional arrangement is to keep the large toroidal transformers away from sensitive electronics. All Naim PSUs have the transformers on the right inside the cases.
Your SC transformer will be very close to your pre-amp and phono boards if you have them.

I know why the PSUs should be right - but have no boards inside. Prefix is inside the TT.
Any transformer coming near the prefix resulted in humming …
Had tested a lot and found this arrangement to be best

Not ones that carry power, unless you are OK with the risk of them getting pulled out accidentally while hot and rendering your kit foobar.

All my SNAICs and Burndies get locked down. DINICs are another matter, and with HiLine (that I use for SUperline/NDX2) it’s moot since they don’t even have locking connectors.

They should go as close as possible and
they can touch in one place, you can try with or without the cables touching in one place.
This has to do with earthing.

They just need to run closely together, no need for them to touch.

Yes, best to run the SNAIC 5 and the Burndy closely parallel if possible, otherwise, try one loop of the SNAIC over the Burndy.

OK, thanks. Will try to do so … I can put the SNAIC on top of the stiff Burndy - at least on one point. But so they touch each other. Thought this should be avoided.

On the SC side the rubber on the Plug side slipped a bit of (see foto). When I loosen the screws in total I could try to pull it back. Do not know if I dumped the cables underneath when doing so.
Should I give it a try ore leave it as is is - it works in its current position

Only touch in one point in that case, otherwise close parallel without touching.

I made it more parallel, but there is still air … will deal with it later. Looping around will also be possible

Managed the plug situation
It slipped a bit - have seen a lot of older burndys, where it is the same.
When the screws are loose underneath the “shrinking rubber” (?) is a bit off. I massaged

it a bit back and now it covers 3/4 of the gap. The cables underneath are also stiff - no chance to compress them After tightening the screws there is still too much rubber outside, but the plug is fixed, so no tension on the cable. The plug is sitting tight, but not too tight as Richard recommended - can be moved a bit.

Now it is time to hear the black beauty

Yes I think this is advised

Really … this is totally new for me . Thought the collars must be always loose. Have all connections not fixed