Booting DOS from a vinyl record

I remember booting a Research Machines 380Z back in the day from cassette tape but how about booting DOS from a vinyl record? Check out this ingenious but nutty project:

I wonder if DOS runs better if the record is played on an LP12?

What I’d like to know is how he managed to cut the 10" vinyl.

I take it only works off MS-DOS and not Digital Research’s DOS!

I first used domestos on a Sirius in the the early 80s.

Had to Google that. Remarkable, even though it’s not strictly running on the pregnancy test (he changed the CPU and LCD). Would be even more impressive if it ran Crysis

I used to enjoy slightly mad computer projects myself, although not quite as ambitious it was often good fun.
One time we (group of RN colleaugues all into IT in various ways) built an original x86 computer complete with chip running at 4.77 MHz all from stuff we had in junk boxes.
Another time, we had a competition to build the fastest 486 and I somehow managed to O/C one to 233MHz if i recall, by changing the oscillators and using a very primative liquid cooling circuit, with a giant copper heatsink cooled by cheap gin circulating via the ice box of the fridge in my room. The whole thing was covered in frost but worked, albeit briefly before crashing.

Perhaps it would have run longer with expensive gin?

Yes, could have got it cooler with higher alcohol content gin and a dash of liquid nitrogen!

Incidentally, the ‘greybeards’ here may recall the BBC Micro Live & I think Tomorrows World where software was broadcast for viewers to record on compact cassette - which computers used to load their software for BBC Micro, C64, Sinclair Spectrum etc.

The “Computer Program” can be watched on You Tube.

I have a ZX81 and Spectrum both working

We had one of those at school. I remember it getting the colour board upgrade and a Microvitec Cub monitor.

James, I did A Level Computer Science on one of these in '79/80. Not many schools had or could afford a computer at the time and this was one of the few options for the educational market. It was cassette tape only, 4Mhz Z80 processor, 16K memory, 40x24 mono video card.

I always thought it was an enormous case but was never allowed to look inside. 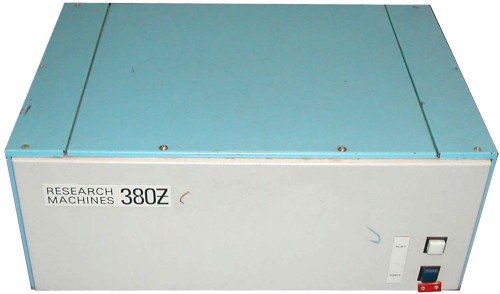 As I remember the machine had a very simple monitor in firmware so it didn’t strictly boot from cassette but I do remember waiting an eternity for the BASIC interpreter to load from tape at 300 bits/sec.

Good to see one of the early ones. Our 380 was black with IIRC, a couple of disk drives and a key lock on the front panel. Then came Vic20s and the ubiquitous BBC B.

On the flip side many ZX Spectrum programs are downloadable as WAVs you can use in place of the original cassettes.

Got some WAVs on my ZX81 too. Mikrogen Chess.