Bought an 82 - now other questions

Sounds like a very interesting system you have there @Igel. Be nice to see some system pics when you get a chance.

I have an 82 and if you want vfm consider:
SBLs…cheap as chips and you will be amazed
Qutest
Supercap using more that the 4 rails on the 82 otherwise it does not make sense imo.

One Supercap is much much better than two Hicaps on the Nac 82.

I don’t think that it’s okay to discuss modifications according to the Forum rules.

consider:
SBLs…cheap as chips and you will be amazed

I’ve found my SBLs have responded to upgrade after upgrade. They are an amazing speaker and I wouldn’t be without them. I even love the way they look and am prepared to put up with the faff for what they give. However, they do need that solid floor and solid wall setting!

The 72 source is a Lumin A1 to help relax the sound a little, all standard naim din interconnects and A5 speaker cable accept the rca to Din on the A1.

Btw Ive got Spendor S8s which also worked very well on the 72…but use these on my SN2/HCDR system in a room where seating is only approx 4.5m back from speakers.

With systems in different rooms of varying sizes I played around to get the best matched systems… The Focals need a lot of volume around them to tame the tweeter for my ears. In a smaller room they give me listening fatigue…. They are truly special when in the right room and connected to right amp/source.

Compared to the SN2/HCDR the 72 Olive system for me is clearer in the mids with better instrument separation, has a little less top end extension that sits on a tightly controlled bass that goes very deep when called for.

That is correct. Discussion of power supply mods is not allowed. I’m surprised those posts have lasted this long - perhaps Louby Lou has dragged Richard out for late-night walkies.

Maybe it’s because this particular discussion for the 82, that’s been discontinued 20 yrs ago, is doing no harm to any current product, to a 282 neither, which is on its way to be discontinued too in a near future too. I might be wrong though, but it’s not like discussing 3rd party psu’s for an instance, which is clearly another story.

I find the flatcap barely capable of anything

In fact Flatcaps they’re very good upgrade on the CD5X/5XS players (if they can be supported ?)
I found hicaps too much on CD players but preferable on preamp/intg amp.

Just that point about an HC being too much on a CD player, in what way does that manifest itself?.

I’d assumed some of the external PSs for CDs were similar to Supercaps with a few necessary tweaks so in my mind I was assuming an HC would be a lesser power source.

Which CDs would take an HC?

I see. They all post-date my system then.

I’m still curious as to why a HC would be too much, all the more so if these were designed to take one.

Many years ago, on CD3.5, I found the original Flatcap embarrasingly close to HiCap on the CD player … HiCap was better, but whether it was worth the price difference was the question … but on preamps there was a much bigger difference.

(Will be sticking with a FCXS on mine). 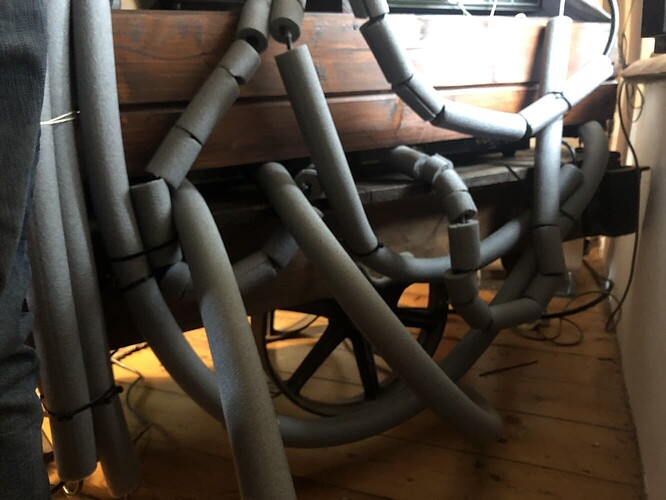 Congratulations on your new 82.

I found the CD5X easy to love, with and without a FC2X. It is an objectively wonderful player at its level, and a value-champ, for its age, on the used market, IMHO. I recommend troubleshooting and servicing to hear it at its best. Naim’s ongoing support for the CD5X is in its favor.

I did trade mine for an equally-wonderful CD5XS only because I so loved the 5X but needed the digital out for my Qute2, whose analog inputs were already used up. Consistently pleasing.

Nope, that one is OK provided that the electrical connectivity in the cables remains unmodifiued.

OTOH, it looks a bit like the central heating pipes in our airing cupboard!

With you on that @CalamityJack, just love them!