We’ve had tea and coffee so why not!

Which is your favourite supermarket bread?

Used to really like Jackson’s white bread at Waitrose (kids didn’t), got one the other day and didn’t like it at all, they’ve changed the packaging it seems to me and maybe changed the recipe? Looks more downmarket.

Do you have a gluten intolerance? (Not that it’s any of my business)

(Hope you’ve picked up after the jab the other day.)

I’m a bit conflicted here - I like Jackson’s, because it’s from Yorkshire - but I find it too sweet.

Sourdoughs kind of have to be fresh - the prepackaged supermarket ones (Waitrose do a big range) are all only good for toasting.

Brown - i think it’s hard to top a Burgen

Any customers of HiFi lounge may have been there when one of his customers brings in fresh bread - it’s awesome. Last time I came home with two loaves

I had an Ancient Grain Pave (which was wonderfully salty) and a Potato Sourdough 1 which was as good as you imagine, and hey…it’s carbs in cards, so what’s not to like!

I like Warburton’s farmhouse, not seen the one you mention, will keep an eye out for that.

Another to look out for when in Lidl.

Well, we usually get Warburtons Seeded Batch loaf and Sainsburys Sesame Bloomer. Not as nice as Maltese bread, though …

Well, we usually get Warburtons Seeded Batch loaf and Sainsburys Sesame Bloomer. Not as nice as Maltese bread, though …

Not tried those either.

I really enjoy seeded breads but no one else in the house generally does, or at least they mostly stick to white, kids may change as they get older I suppose.

I do indeed. Along with sugar and dairy… All relatively recent developments.

Have indeed recovered after the jab thanks.Really not a pleasant experience. Made worse by the fact I really don’t have such reactions normally.

Don’t buy much supermarket bread, maybe 1 in-store baked french stick with my online shop. Prior to Covid I would buy the occasional sourdough loaf from Waitrose.

Mostly I bake my own bread and the kitichen/dinning room unitilite is a great source of warmth to speed up the dough rising.

Provocative in so many ways

I’m going to go with the obvious one: you mean “Teacake”

(Currently profiling you based on this 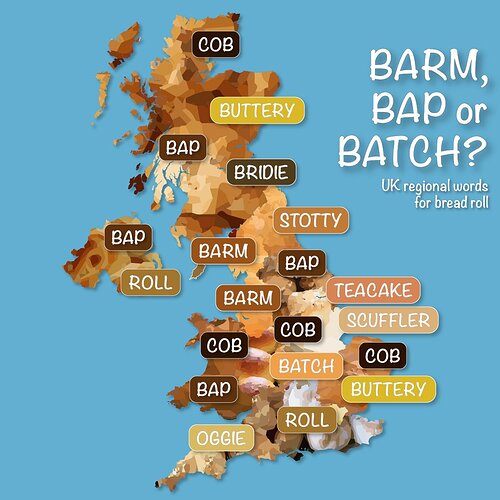 I do indeed. Along with sugar and dairy… All relatively recent developments.

Carbs are my enemy so I don’t regularly eat bread or other high carb fodstuffs, but when I do I prefer it to be something nice.

Out of interest which gluten free products do you enjoy?