The Queen guitarist has been knighted by the King. 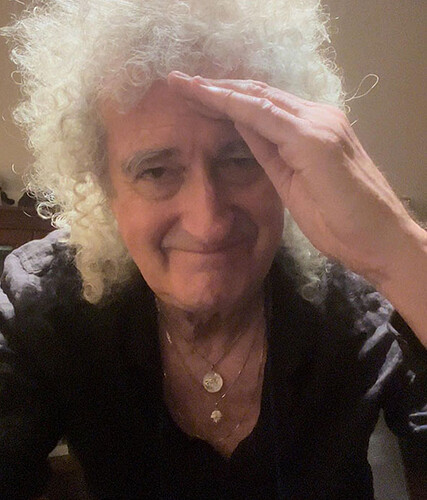 Congratulations, Sir Brian. He must have been forgiven for his pyrotechnic display on the roof of Buck House for Her Late Majesty’s Golden Jubilee!

According to the gazette in The Times, his middle name is Harold. Who’d have thought it?

Congratulations Dr Sir Brian May (and Lady May)

If you say his full name quickly enough and many times over, he begins to sound like a box of matches.

his middle name is Harold. Who’d have thought it?

Well deserved for Sir Brian May.

Congratulations Sir Brian - I’m sure your family are very pleased for you!

Sir Queen - really, there must of been more deserving nominations. Thank god we abolished knighthoods years ago.

Rachel Riley a much more deserving award I feel the

I don’t even know who she is

Looking at what he got it for doesn’t seem to bad. Others have had them for a lot less!

She is a holocaust awareness activist, and a mathematician .

She is also a a TV presenter,

Well, yes but she is slightly controversial in some areas, so she definitely has her knockers.

Sorry for the Carry On Humour attempt, but she is a very serious and intelligent young lady, and I think a very good example to young people

Well that seals it, I’d give to her. Least she’s doing some positive.

I’m going to be controversial imo Brian May hasn’t done anything since Freddie past away. I’ll definitely get hat and coat there’s safety in distance.

Rachel Riley has been very active in challenging on-line discrimination and anti-semitism in particular, winning two high profile legal cases in the UK. She is also a great mathematician in a prominent TV role when many other role models young people may see have less to aspire to.

Apart from his obvious musical contributions, Sir Brian set up an active animal charity, owns and promotes a model eco-wood, is a successful activist in restricting the vile fox hunting tribe, is a notable astrophysicist and promotes a range of scientific interests. He also does a lot of lobbying behind the public arena with ministers, initially focussed on his ‘Common Decency’ campaign and consistently working against the Badger culling legislation.

I’d call that using your public profile for public good!